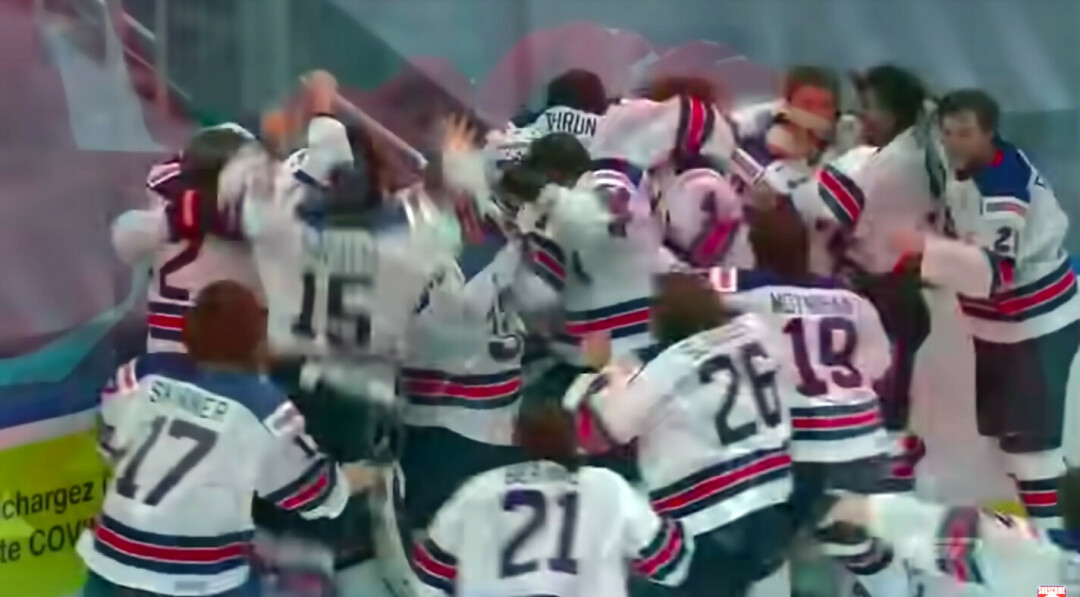 PARK POINT – Last Tuesday wasn’t too much different from most week-days. There was one heck of a big game coming up that night, though, and as a result, I was probably doing more clock-watching than on most days. But even though I was waiting for yet another World Junior Tournament Gold Medal game between Team Canada and Team USA, I was mostly pretty calm.

I was calm to the point where a few days afterward, I couldn’t believe that I wasn’t a bit more revved up. I look back now and think that perhaps it was a quiet confidence that had overtaken me.

After all, every day since the tourney previews began, I had to bear witness to the Canadian squad’s great superiority. According to some hockey media, it was a team so good that it would be futile to play the games against them. The outcomes were so written in stone that it couldn’t be questioned or changed. This was a team that had no less than 20 first-round NHL draft choices. What were the Americans to do?

I had the good fortune to be able to watch most of this event in its entirety. And this year, like quite a few, the top 5 teams were very evident.  Canada, the USA, Russia, the Swedes and Finns were the best. The Czechs, Slovaks, Germans, Austrians and Swiss represented the rest of the field. I got to watch a lot of games and do a lot of analyzing.

The U.S. entry had a slow start, as evidenced by their 5-3 loss to the Russians in G1. They made some quick adjustments and improved each game on up to the Gold Medal tilt. There were times when they were a bit frustrating to watch because I knew this team had a lot more to give than they were at times. But they played this event as smartly as a team could.

The Canadians stormed in and buried the hapless German team 16-2 in their opener. The Germans were outgunned and unprepared as they were not at full roster due to COVID isolations and other issues. As I watched, I kept asking myself when the Canadians would pull back a bit and just run the clock out. The game was decided a long time ago. But that’s not always how it’s done in hockey, I guess. I didn’t like what I saw, though. I thought they were humiliating their opposition.

The event moved forward, and each day, whether on the TV broadcast or satellite radio, I had to listen to stories regarding the Canadians’ greatness. And don’t get me wrong, they are pretty good. On paper, they may have been one of the greatest rosters ever assembled for this event. I’ll admit that in a heartbeat. At the same time, I know that every team in this sport’s history is beatable. I learned that in my observations of Mr. Herb Brooks when he coached at the U of M, and I was a young man who fancied himself to be a “student of the game.”

“Herbie” liked confident teams. He didn’t like cocky teams who were unprepared to back that up. But as the medal round got closer and closer, and the whole glorious event funneled down to that inevitable meeting between cross border neighbors and rivals, I could see growing, quiet confidence in the Yanks. It’s not that the Canadians were a bunch of boastful miscreants either. Most of the effusive praise for them came from media north of the forty-ninth parallel, not from within the team.

So, the consensus of my listening leading up to Tuesday eve was that it was Canada’s Gold Medal to lose, and, well, good luck to the Yanks. The Canadians blasted their way through the Czechs and the Russians to make the title match. (3-0, 5-0) while the Americans had a bit more of a battle on their hands, ousting the Slovaks 5-2 in a game that was harder than the score would indicate. And then they prevailed over a tough Finn squad 4-3 in a game that had a lot of big exhaling at the end of it.

Still, I just had this feeling underneath all of the noise that the USA squad could beat the Canadians. The USA came right out and played the Canadians straight up from the start. They didn’t pull back and stand there in awe. They went right at them with a solid blend of offense and defense, not taking careless chances, and with Spencer Knight in goal to backstop the team when needed, the Canadians were stymied from the get-go. The result was a 2-0 victory for the ages for USA Hockey and another Gold to take back home.

In talking about the tourney with my nephew Paul Jr. down in the greater Phoenix area, we had to invoke a couple of thoughts of our late hockey hero, Herbie. Regarding the twenty-first round, draft picks on the Canada team; All-star teams usually fail. And then this; I’m not lookin’ for the best players Craig, I’m lookin’ for the right ones. And so, Herb’s philosophies about the game endure. When the Yanks didn’t fold the tent right off the opening faceoff, I’m not sure the Canadians knew how to take that. The Americans did, though, and rode it to a Gold Medal.

THE MINNESOTA WILD training camp has continued forward in St. Paul, and by the time this edition of the World Wide Duluth Reader hits the newsstands, the Wild will have already played G1 out in LA versus the Kings. I’m not sure about you, but without the benefit of any preseason games and so on, I’m not expecting a work of hockey art for the first couple of weeks. The Kings are in a rebuild of sorts, and the Wild are as well.

The speculated opening night roster I put forth a couple of weeks back is no longer valid either. Injuries and so on have forced some changes to that. Mats Zuccarello is out indefinitely with repairs to an arm situation that has dogged him for a couple of seasons. Backup tender Al Stalock is also out with a UBI.

The team has brought back Andrew “the Hamburglar” Hammond to take his spot, but he will be battling Kaapo Kahkonen for the two spot. Marco Rossi has been categorized as being out for the foreseeable future as well, coming back from the WJC with a UBI. So, this looks like the opening night roster for now;

Each team is allowed a six-man taxi squad this season, and several players were waived on Sunday to prepare for the finalized opening night roster. Of those waived, I guess I’d be surprised if any were picked up. As I stated previously, I think the club has a shot at the fourth position in the West and a playoff spot. It’s all in their hands! PEACE