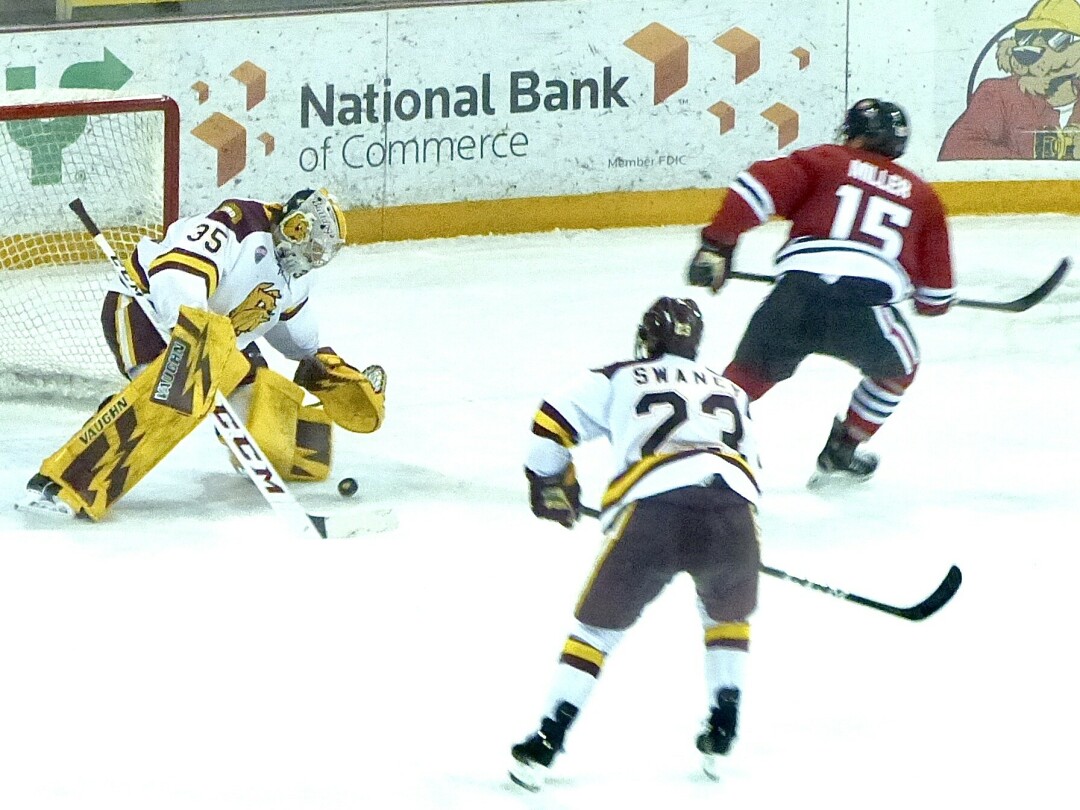 There may be no teams in the country any quicker than St. Cloud State or UMD, so when the two of them squared off at AMSOIL Arena last weekend in the Bulldogs first home games in almost a full year, we should have expected a tight-checking chess-match.

It was, but the upstart Huskies made the right moves and won both games, 4-3 on Friday and 1-0 in an overtime battle that saw all the big-time scorers on both sides reduced to skating drills.

When UMD won the opener at St. Cloud the previous weekend in an overtime thriller, and St. Cloud won the second game, it seemed to make that theory more rational. But now that the second weekend in a row is over, and St. Cloud State swept the Bulldogs 4-3 on Friday and 1-0 in an overtime virtual standoff Saturday, suddenly the Bulldogs are back in the pack and needing a spark. For most of the weekend, the two teams sped back and forth with one side’s big guns virtually nullifying the other’s big guns.

In the first game, The Huskies jumped ahead 2-0 in the first period, on goals by third-line center Jami Krannila and fourth-line wing Chase Brand, then UMD countered for goals by fourth-line wings Luke Mylymok and Blake Biondi 44 seconds apart to start the second period. Two minutes after tying the score, however, Mylymok was called for checking from behind, and the officials gave him a 5-minute and a game disqualification. Biondi was sent to serve the 5 minutes, which, in retrospect, meant UMD’s entire offense for the first half of the game was out of action.

Nick Swaney put UMD ahead 3-2, but a bad giveaway at center ice allowed Nolan Walker to bang in a rebound after Micah Miller stole the puck and broke in alone, with 1:01 left in the second period, and the game entered the third period 3-3. 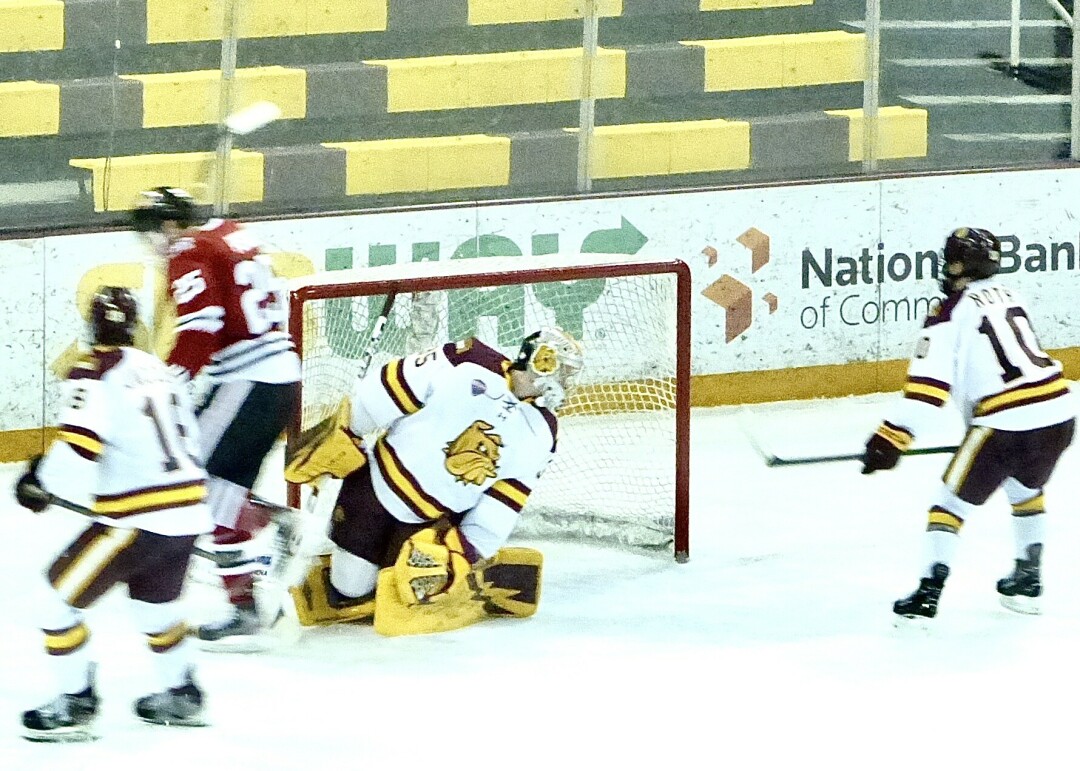 St. Cloud State's Jack Perbix was a blur as he passed UMD goalie Zach Stajskal after scoring the Saturday game's only goal in overtime.

UMD could exercise its traditional home-ice magic, but instead Kevin Fitzgerald deflected one in at 2:29 of the third for a 4-3 St. Cloud lead, and UMD never threatened to score the rest of the way. The teams looked like mirror images of each other for much of the game, and the Huskies seemed to adjust to bottle up UMD’s predictable puck-clearing ploys. Maybe that’s because Huskies coach Brett Larson spent so much time assisting UMD coach Scott Sandelin. Even when Sam Hentges, St. Cloud’s first-line center, went off for the only two penalties of the third period, UMD’s power play fizzled, stringing together 1-man rushes that led to the Huskies simply retrieving it and firing it the length of the ice.

Regardless, a Saturday victory by UMD would leave the teams splitting two weekends. But on Saturday night, the silence in the stands was noticeable as neither team could generate any offense. If the ice crew had forgotten to put the nets in place for the third period, neither side would have noticed, as the game stayed scoreless all the way through three periods. Sandelin chose to give Ryan Fanti a night off and started former Grand Rapids star Zach Stejskal in the net, and Stejskal stopped a couple breakaways, including one by his former Grand Rapids teammate, Micah Miller.

It remained 0-0 until the teams went to the 5-minute 3-on-3 session. At 3:58, Nick Perbix broke up the right side, 1-on-2, made a world-class deke to walk through Kobe Roth at the right circle, then veered to the slot, and beat Stejskal with a backhander to win the game 1-0. The entire arena was stunned into silence. Or wait. There were no fans allowed inside; no wonder it was silent!

For all those fans waiting for their Bulldogs to enliven Duluth’s winter nights, being swept, and shut out 1-0 in overtime, was not the way to do it. Now the Bulldogs have to get it going on the road at Miami of Ohio, where an entirely different style of play awaits them.
UMD women may play

It’s been a frustrating year for the UMD women, who have had just about as many games cancelled for pandemic reasons as they’ve played. But this weekend, at AMSOIL Arena, the Bulldogs face Ohio State, which split with Wisconsin last weekend to knock the Badgers out of the nation’s No. 1 spot. Minnesota replaced Wisconsin, which slipped to second, and Ohio State earned third.

The usual test of what teams can move up to challenge the Gophers and Badgers to contend for the title could come down to UMD challenging Ohio State for third place and that role as chief spoiler. 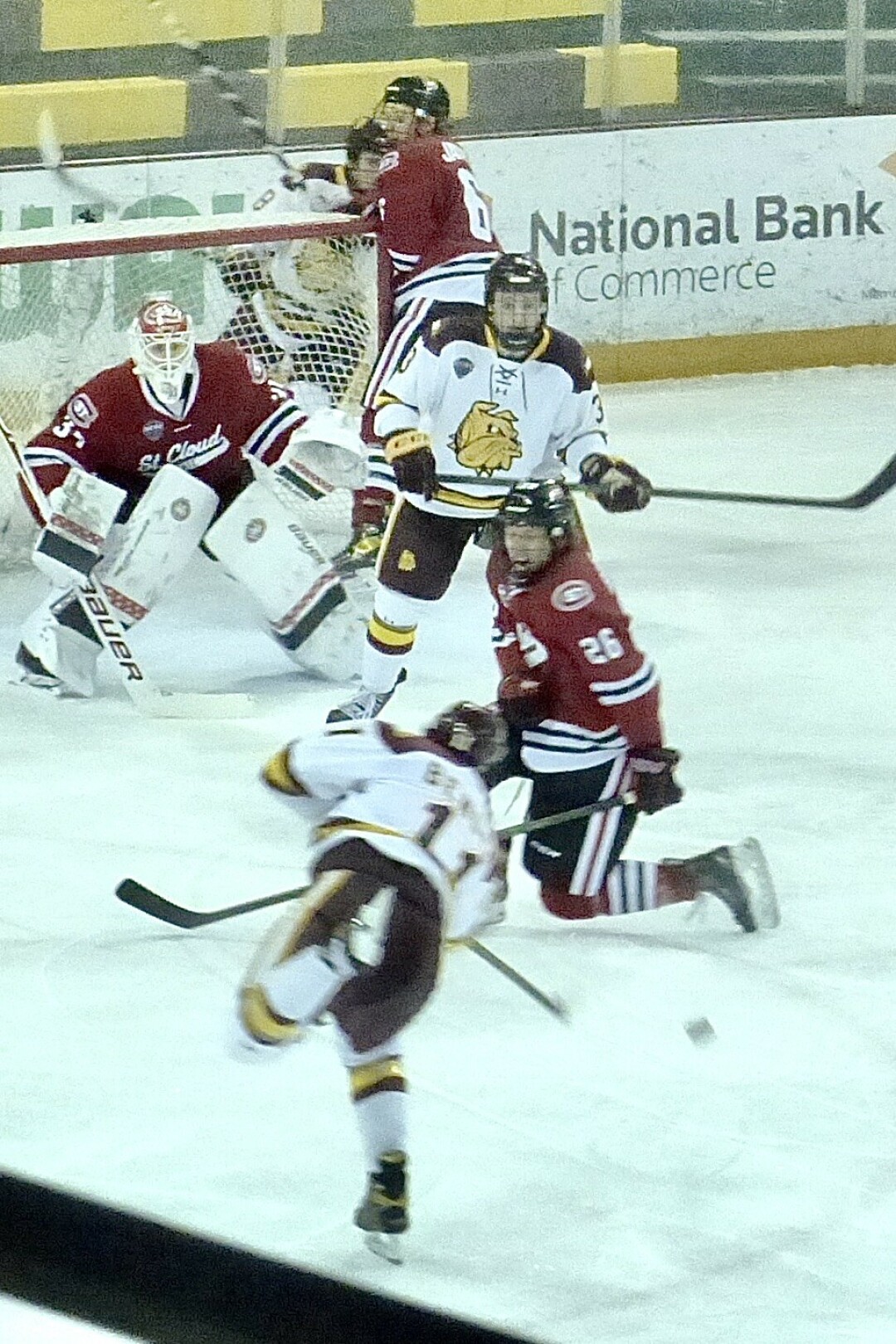 Jack Perbix starred at both ends of the ice, blocking a shot by UMD's Koby Bender.

After worrying about having no season at all, high school hockey teams swing into action this week, and Duluth East faces Denfeld Thursday night at Heritage Center for a grand opener. This is the year, by the way, East will play Hermantown in a long awaited pair of games between the two different class powers. The Hawks may have the horsepower to surprise the Greyhounds this year, although it won’t be a surprise to East coach Mike Randolph.

At this point, both teams are simply thrilled to be able to play.

OK, OK, Alabama was the best football team in the country. The perennial powerhouse took apart Ohio State 52-24 in the NCAA championship game in Miami. Ohio State kept battling, and the Buckeyes had a chance, but when star running back Trey Sermon was cracked and injured his shoulder on the first drive of the game, it eliminated the guy who gained 195 yards against Clemson’s nation-leading defense in the semifinals. That left it all up to quarterback Justin Fields, who was also playing with injured ribs from the Clemson game.

Fields had thrown six touchdown passes against Clemson, but he only had one against Alabama. Mac Jones was 36-45 for 464 yards and five touchdowns for the Crimson Tide, and receiver DeVonta Smith caught 12 passes for 25 yards and three of the TDs.

All things needed to be working for Ohio State, and they weren’t, and Alabama just had too many weapons to allow the game to stay interesting.

I feel the same way about the NFL playoffs now that Seattle played its way out of the first round. The Los Angeles Rams beat the Seahawks 30-20, and will now go to Green Bay to take on the Green Bay Packers, whose way to the Super Bowl may have just gotten easier. Beware Buffalo, however, from the AFC side.

The National Hockey League, which ended late and is starting late, opens this week, and the Minnesota Wild, with all sorts of revisions to their lineup, open play with games at the Los Angeles Kings Thursday and Saturday nights. The NHL teams are going to play two games in most cities this season, which should reduce travel costs and inspire some rivalries. Wild fans can watch the opener, starting at 9 p.m. for the games at West Coast cities.

I’m not sure I feel much confidence for the Wild, but if they can get big Scott Bjugstad to score while centering the first line, it could help a lot. I like the Wild’s defense, especially now that Carson Soucy is back from injuries that knocked him out last year. I’d like to see him paired up again with Jared Spurgeon, the new captain, and provide three balanced units on D, but I doubt that will happen right away.

The spotlight will be on Russian rookie Kirill Kaprizov, whose speed and skill could get the Wild offense off to a high-caliber roll, flanking Bjugstad with Zach Parise on the other side. And can Cam Talbot do the job in goal? We’ll see. That makes it about four major question marks that all have to come up on the right side for the Wild to be a contender.