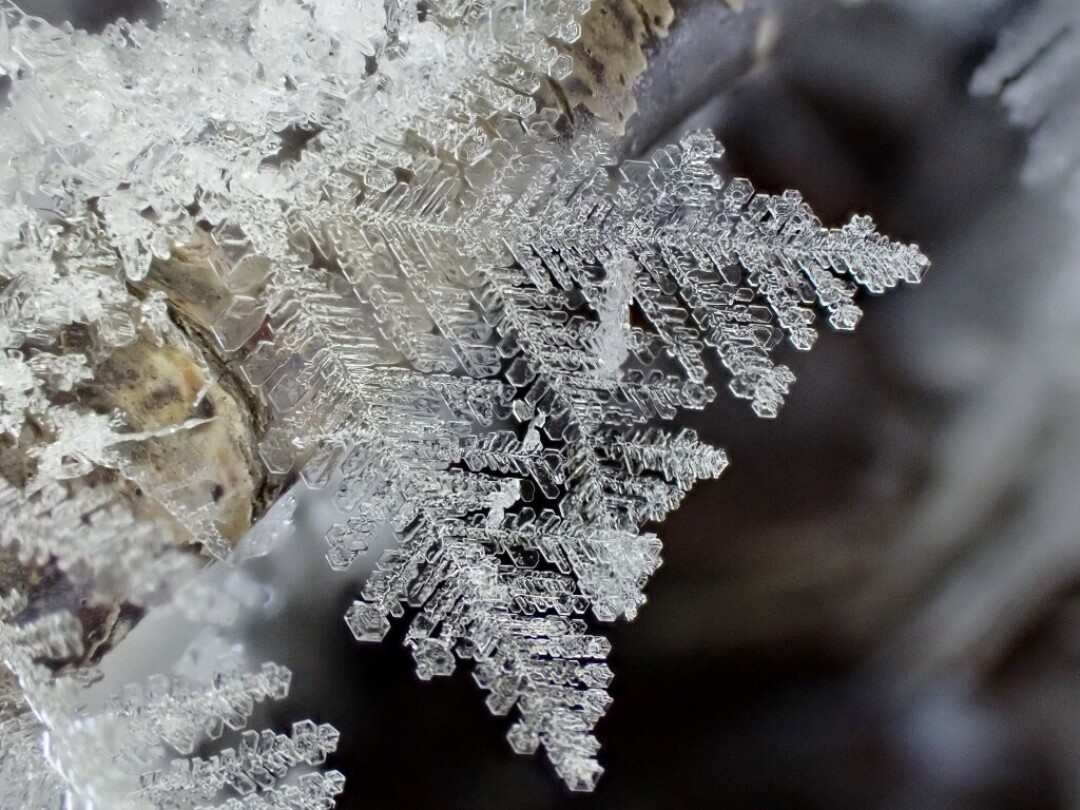 Winter is a season of magic. Hidden beauty becomes visible. Much remains a mystery.

It begins with our breath.

Chilly mornings are one of the first signs that winter is on her way. We step outside, fill our lungs with a deep drink of invisible air, and send forth a translucent, swirling cloud. Sunlight – because the coldest mornings follow cloudless nights – makes it glow.

Every day of our lives, air goes in and out of our lungs at least a dozen times per minute. Air also cycles in and out of plants, animals, fungi, soil, and more. I love to think about what this means for our connection to the biosphere.

The air we sip into the cradles of our lungs was – just a moment ago – part of someone else’s life. The air we return to the world may enter a tree and become maple sugar, or enter a bird’s lungs and become song.

During the pandemic this has be-come a terrifying problem. But in the past, in the future, and always when we’re in the woods, this reciprocity is a gift.

Nonetheless, it’s easy to forget the physical properties of our breath until cold air forces the gaseous water vapor we exhale to condense into visible droplets. They are now liquid, and while big enough to see, are still small enough to float. This is the same alchemy that fills summer skies with cottony puffs of while clouds.

As winter deepens, a lack of humidity makes our breath invisible again. Clouds, however, remain.

Lately, an unusual combination of winter weather conditions have made visible the exhalations of the Earth herself. Fog that is dense and persistent enough to trigger weather advisories has brought its own unusual magic to the winter landscape.

Snow on the ground releases moisture into relatively warm air. That humidity condenses as night falls. Calm winds fail to sweep the resulting fog aside.

Fog is simply a cloud that hugs the ground. It, too, is water in the air made visible as cold causes droplets to grow. Magically – tenuously – that water remains liquid even though its temperature drops below freezing.

When these supercooled droplets collide with the solid world, they freeze instantly. The ice they form becomes another solid surface, and more droplets accumulate. 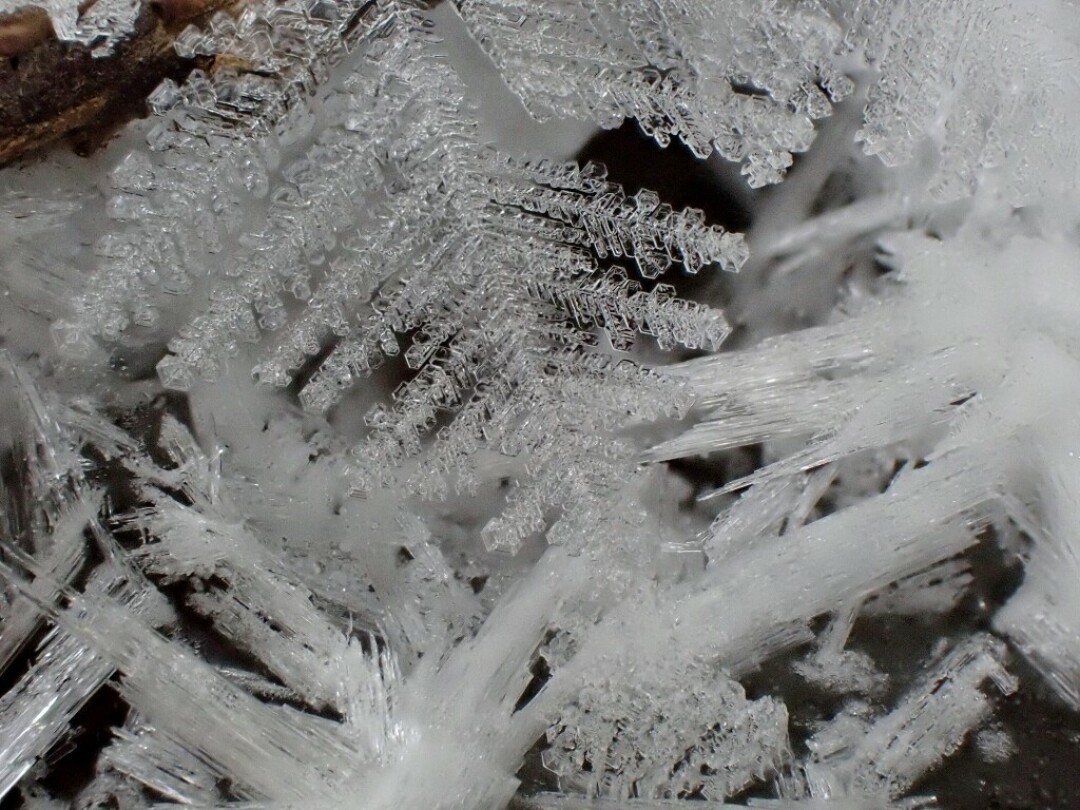 As light winds push the fog along, elaborate, bizarre, thick-but-fragile rime ice builds up on the windward side of pine needles, twigs, and more. For the past few weeks, this freezing fog has accentuated the grace of our forests.

Water in our breath, along with fog and rime, goes through the liquid state as it becomes visible. In contrast, hoarfrost and snowflakes materialize into solid form directly from invisible water vapor when the dew point is below freezing.

When that water vapor crystallizes around dust particles in the air, we get snow. When crystals grow on twigs, pine needles, even on other bits of ice, we awaken to a lace-encrusted fairyland of hoarfrost.
Down by my lakeshore, a spring bubbles up and feeds a bit of open water under the low-hanging branches of hemlock trees.

In this protected haven, on cold nights, invisible water vapor in the air feeds the growth of elaborate crystals patterned like feathers, ferns, needles, and trees. These physical structures – formed of crystal facets and six-fold symmetry – give us a peek into the inner workings of water molecules. It’s a world filled with electricity, with forces of attraction and repulsion, with crystal lattices; a world usually observable only to chemists and physicists.

Yesterday, when I headed down to the lake, I found it ringed by trees painted white with rime ice and shining in the sunlight. Impossibly complex crystals of hoarfrost bordered the spring. And a maze of otter, fox, and coyote tracks recorded stories of my unseen neighbors in the snow.
I filled my lungs with a deep drink of air – now with some of its secrets made visible by the magic of winter. 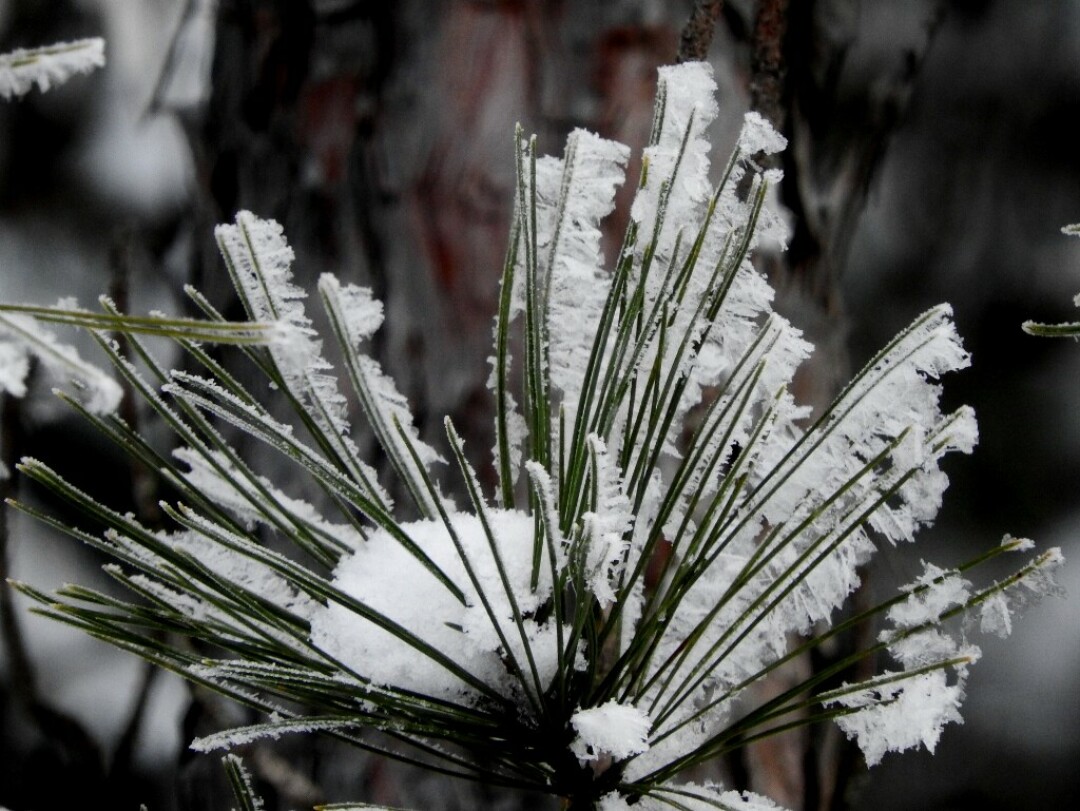 Rime ice formed on the upwind side of these red pine needles when supercooled droplets of fog froze upon contact.