The chain of being 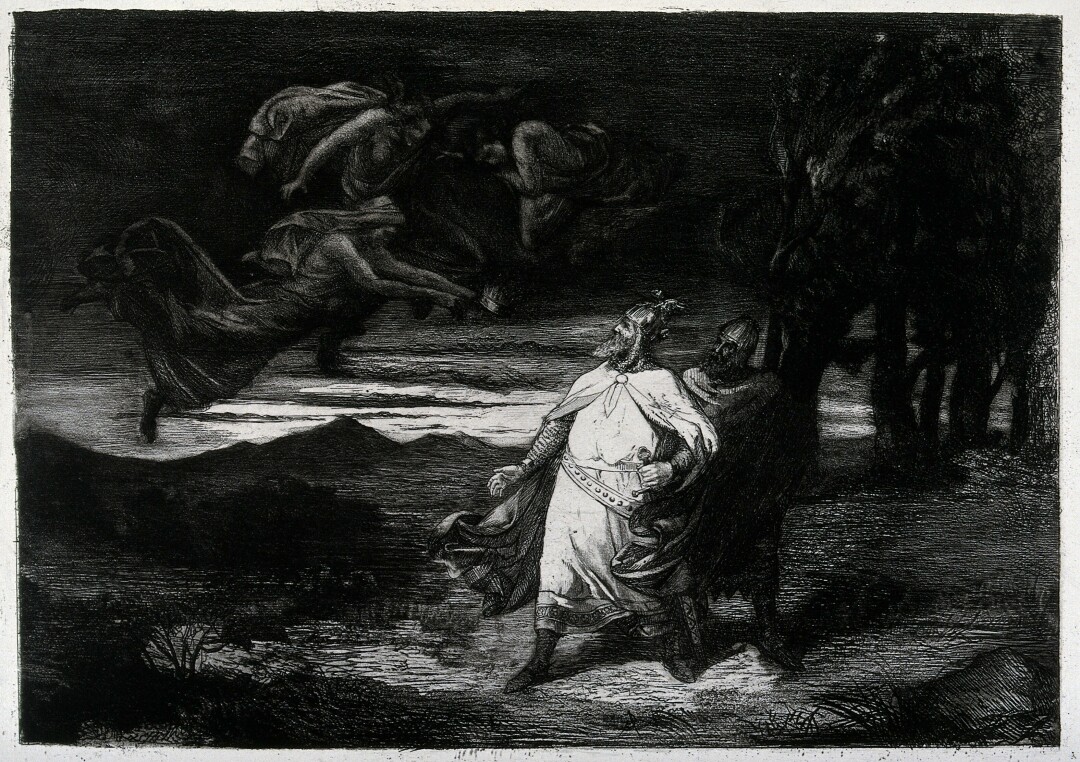 Where do we belong in God’s universe?

In the 16th Century the dominant religious “theory” was that everything on the planet from God down to minerals and rocks were links in the Elizabethan Chain of Being. The earth that came from the disintegration of rocks was at the bottom of the chain. At the top of the chain was God.

If a human tried to rise above his anointed place in the chain, he brought disaster to himself and family. Think Macbeth.

Shakespeare lived during the reign of Elizabeth I {1558-1603), the daughter of Henry VIII and his second wife Ann Boleyn whom he had beheaded on a trumped-up charge of adultery with half of his court. He fully understood the Elizabethan Chain of Being and used it in the plots of his historical plays, particularly Macbeth, his play about a nobleman killing King Duncan of Scotland so he could assume the powers of the throne.

In the play, Macbeth’s wife actually kills King Duncan (“Who would have thought the old man would have so much blood in him?”) because Macbeth wavers.

After his ascension to the throne, Macbeth and his Lady are in constant trouble. In the last act, King Macbeth realizes he has broken the links in the chain:

“Tomorrow, and tomorrow, and tomorrow, creeps in this petty pace from day to day
To the last syllable of recorded time, and all our yesterdays have lighted fools
The ways to dusty death. Out, out, brief candle! Lifes’s but a walking shadow,
A poor player that struts and frets his hour upon the stage and then is heard no more.
It is a tale told by an idiot, full of sound and fury, signifying nothing.”

Macbeth has been in the English literature curriculum for hundreds of years because it teaches that to gain power too fast in society can lead to disaster. And to gain too many riches too fast can also be disastrous.

The battle of the bathrooms

A waiter at an up-scale restaurant in New York recently reported on conversations he overheard while serving lunch to the wives of four billionaires. The four argued about who
owned the most bath-rooms in their various mansions.

After some tabulation, it was announced the winner had 39 bathrooms. I wonder how many bathrooms Amazon CEO Jeff Bezos owns in all his properties scattered around the world. His recent divorce made his ex-wife the 15th richest person on the planet. Maybe he lost some bathrooms in the divorce settlement. His Washington, D.C. mansion has 27 bathrooms and he owns several others in the world.

Bezos, the richest private person on the planet, most likely also owns the most private bathrooms, but he will have to go some to beat out the public property with the most bathrooms.

Perhaps the next competition will settle around garage spaces.

A Hollywood mansion just went on sale for $28 million. It has a 28-car garage next to the tennis court.
Buckingham Palace, where Queen Elizabeth II lives with Prince Phillip in six rooms, has 78 bathrooms to serve 775 rooms. The palace, sitting on 39 acres, contains 188 staff bedrooms, 92 offices, 52 royal and guest bedrooms, and 19 state rooms. There is one swimming pool in the palace but it is reserved for the royal family.

In a recent column I described Teton County, Wyoming as the richest county in the Divided States of America. Now I’m going to describe one of the poorest counties, Lowndes County, Alabama, as covered in the Nov. 30 New Yorker. There are so many poor counties in the DSA, no one seems to know the absolute poorest.

First, let’s remember that the poorest counties provide the most “volunteers” for the military because young people can’t get good-paying jobs and want to escape Dogpatch.

Second, let’s admit that the poorest counties have many blacks, Indians, Latinx, and poor whites who live in squalor and poor sanitary conditions.

Currently, of the 10,000 people living in Lowndes County, 7,000 are black. Most of the present residents are descendants of enslaved cotton pickers. It used to have more slaves than most counties because the soil used to be good for cotton. The base of the soil is almost impermeable clay, which makes it very difficult for operating septic systems.

Alabama law requires that any residence not on a municipal sewer line must have a private sanitation system. That means a septic tank and sanitary system. At least 40% of the homes in Lowndes have inadequate septic systems-or none at all.

Many homes have “straight pipes” that empty waste to the grass outside. Because of the clay soil, the waste does not filter down. It sits on the surface, smelly, infectious, and causing occasional backups. Many of the homes contain dangerous black mold. In heavy rains the water stays in the ditches for days, creating big storms of mosquitoes that pass on many diseases.

In Alabama, not having a septic sys-tem is a criminal misdemeanor with a fine of $500. Because of the clay soils, a good septic system often runs $20,000, way beyond the means of many resi-dents. More than 80% of Alabama homes are not hooked to municipal sewer systems. (One in five American homes are not on city sewer lines.)

The Southern Black Belt has wells, rivers, and lakes polluted by E.coli and fecal coliform.

All of this degradation exists in the richest country in the world in Southern states governed by the richest political party in the DSA, the White Republican Party.

What is the 21st century chain of being during the Trump years?

The top of the 21st century Chain of Being, if there is one chain left, still has a god, but his name is King Donald Trump who claims he has never need-ed forgiveness of that other God.

He is the top link in the chain, foll-owed by his five children by three wives: Princes Eric, Donald Jr, and Barron, Princesses Ivanka and Tiffany, and god’s third queen, Melania-and his nine grandchildren. After all, he is worshipped by evangelical Christians as “The Chosen One.”

The next link down is Lord Jerrod Kushner, the king’s son-in-law and adviser-in-everything.

Next in the chain, we have those who can work at home during a pandemic. Next link down the chain we have all those “essential” workers making a country work: cashiers, sanitation crews, nurses, doctors, custodians, maids, cooks, teachers, nursing home attendants, grocery store workers, maintenance workers, etc.

The next link is filled with Blacks, Indians, Latinx, and those of other colors as prescribed by King Donald. The bottom link is composed of our 600,000 homeless.

As for the inanimate links, the sturdy oak tree has been replaced by the wav-ing palm trees of Mar-a-Lago.

Winners and losers of the pandemic battle

Some historians say the rich always win the pandemic wars because they are the best protected during world-wide pandemics. But a few have said the poor laborer actually became the winner of the Black Plague in the Middle Ages because so many died the richwere forced to increase the wages of their laborers because they were so scarce.

The trouble is almost a quarter of the population of Europe had to die to create the scarcity.

And who is generating all of this wealth?

Why, it’s the “essential” worker, the retail, health care, food, maintenance, and sanitation people who are dying at a rate three times that of a stay-at-home “worker.” If that $1 trillion had been distributed equally to every American, each person in the DSA would have received more than $3,000! In November, 2020 we still had 29 million workers out of work.

Ever since Ronald Reagan in 1980 said the most terrifying words in the English language were: “I’m from the government, and I’m here to help”, we have seen a rise of a small class of super-wealthy top-of-chain individuals. Reagan’s California Mafia gave them many trillions when they created the fantasy-and theory -- that big tax cuts would “trickle-down” and create tremendous economic growth.

The only result has been a “pissed-on” theory that destroyed the low and middle class. Now, the richest one-tenth of one percent has wealth equal to what is held by the bottom 90 percent.

Will the rich ever step up to save themselves?

When people don’t have enough to eat, find a shelter, or work for a living wage, they usually get angry. Witness the French Revolution, the French Razor, and the absence of cake.

What would have happened in this country if FDR had not put The New Deal together with all of the organizations with most of the alphabet providing work with dignity and purpose for millions of hungry people?

After almost a 100 years, we are still depending on construction projects providing us with electrical power, irrigation, roads and bridges, airports, buildings, parks and recreation fac-ilities, and work experiences for the young.

In 2020 the Institute for Policy Studies has assembled a list of a dozen superrich have had a tsunami of wealth but have failed to protect their employees from the virus and have refused to pay them a living wage. They are called the “Delinquent Dozen.”

The top character in this greedy chain of being is Amazon CEO Jeff Bezos. His wealth has increased by $70 billion in the last 10 months, but he still refuses to provide adequate protection and working conditions for his workers and fails to pay at least a half million of his employees a living wage.

Bezos accepts unions in Europe but not in the DSA.

Taxpayers provide food stamps and other benefits for his employees. The second link in the Trump chain of being is the richest family in the world, the Waltons of Walmart, who made an additional $48.2 billion during the pandemic. They are well-known for union-busting, supporting right-wing causes, and failing to pay living wages to their “essential” workers.