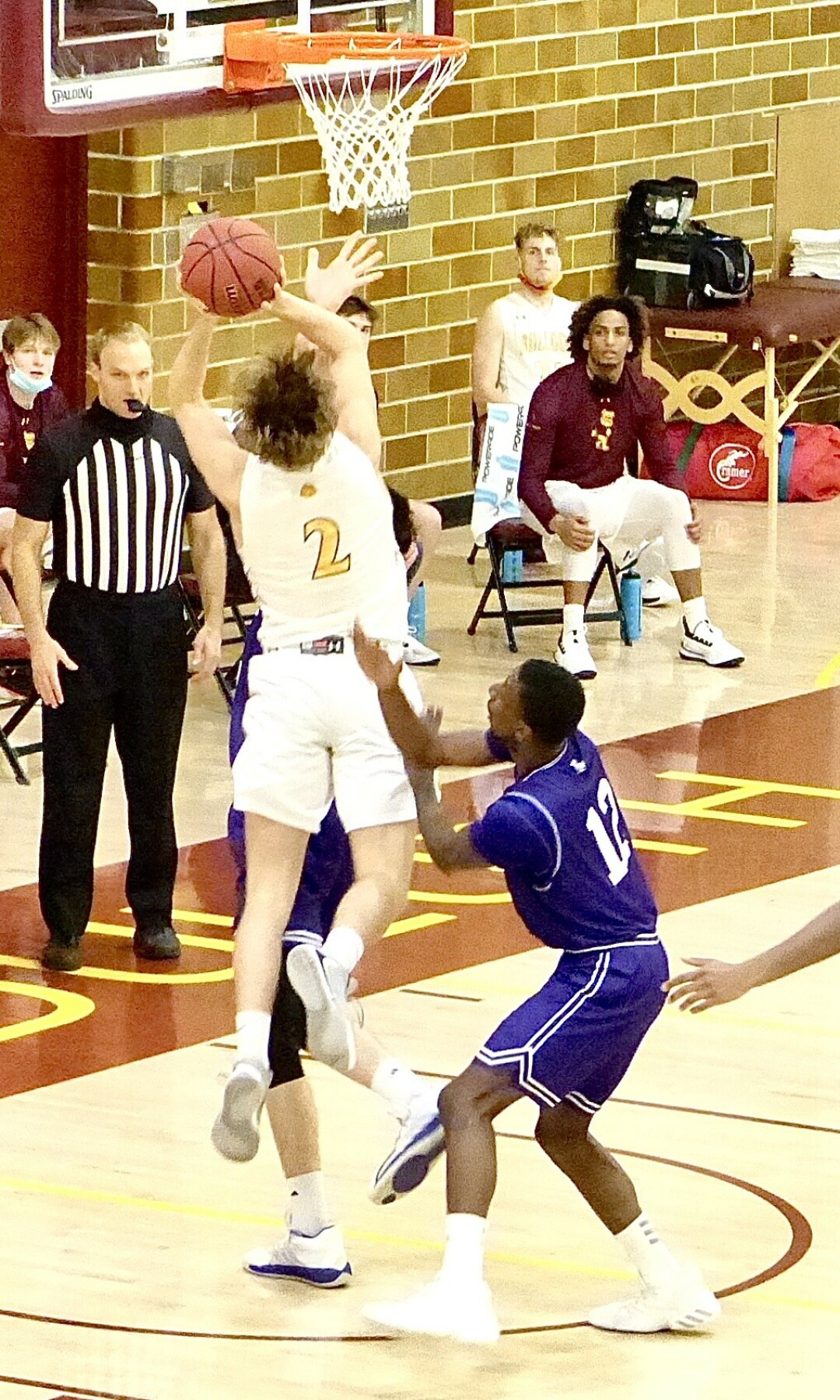 A word of advice to Duluth-area sports fans: Figure out how you can see a telecast or two of the UMD-St. Cloud State hockey series this weekend at AMSOIL Arena, whether it’s by My9, NCHC-TV, or on some other streaming service, and try to tune in to what has become the No. 1 sports rivalry in the state of Minnesota.

If you don’t think it is, keep watching, until the end of this NCHC season, because after the teams match skills Friday at 7:30 p.m. and Saturday at 6 at AMSOIL, they will have played four games in two weekends, and still are slated to finish the regular season in a home-and-home set. Six games should do the job, and they could meet again in the playoffs.

Last weekend, both teams played exceptionally well in St. Cloud, with UMD snatching a 4-3 victory in the first game, when Kobe Roth erased a 3-2 Huskies lead with the only goal of the third period, and captain Noah Cates skated in during overtime, cut to the slot from the right side and whistled in a 25-foot missile at 2:00 of sudden-death to give the Bulldogs a 4-3 victory.

In the second game, Finnish fresh-man Veeta Miettinen got the game’s first goal in the first minute of the second period, and, after Jackson Cates tied it early in the third, Jami Krannila put St. Cloud State up 2-1 with 5:22 remaining, and Miettinen – who had a goal and assist in the first game – clinched the second game with his second goal of the night, a power-play marker with 1:07 left for a 3-1 victory. Miettinen had 3 goals and 2 assists out of the Huskies six goals for the weekend. Keep your eye on him.

For our sports-viewing lifetimes, the rivalry between UMD and Minnesota has been this area’s biggest sports attraction. It got pretty heated at times, and it was the same way with St. Cloud State and the Gophers.

One of the most significant issues with the Big Ten starting its own hockey conference is that no longer are the Gophers the primary rival for either UMD or St. Cloud State. They have emerged as each other’s prime opponent, and it doesn’t hurt that Brett Larson, a former Bulldog player and assistant coach on two UMD NCAA championship teams before taking on the head coaching role at St. Cloud State, will bring his Huskies to town to take on his former team.

An interesting footnote to the series is that in the convoluted manner of this year’s overtime structure, UMD got the extra point for the first game’s over-time victory, but St. Cloud State got all the points in the second game and now stands in first place in the NCHC with a record of 6-2-1-2, with the second 2 standing for overtime losses so far, for 22 points, while the cluster behind the Huskies shows UMD (5-3-2-1) and North Dakota (5-2-2-1) tied with 20 points and Omaha (5-3-2-0) at 19 points.

It helps if you have a mathematician in the house, but it is, to me, convincing evidence that the league should have resisted the urge being promoted by guys who “never played the game” and gone back to the proven old days when the teams played a 10-minute sudden-death overtime, and decided almost every game in the first 3-4 minutes because both teams knew they couldn’t sit on the tie.

Since adapting the NHL rule of 5-minute overtimes, tied flourished because both teams knew they could sit on the tie. Last year, they played a 5-minute OT, then a 5-minute 3-on-3, then went to a shootout. Very exciting, but no evidence of which was the better team, if you like 5-man units.
This year, one 5-minute 3-on-3, then a shootout. Still very exciting, but no indication of which is the better team.

Moving to AMSOIL eliminates the bigger, Olympic size 200-by-100 St. Cloud sheet for the NHL-sized 200-by-85 foot size, and it will be an interesting match for two of the quickest teams in college hockey.
If the Huskies show their quickness on the big rink, will it translate readily to the more congested narrower ice surface? We’ll find out, but with no fans allowed, finding the games on some form of telecast will be mandatory.

UMD coach Scott Sandelin, and his counterpart with the UMD women’s team, have both stressed how import-ant it is to appreciate every game for what it’s worth, because the pandemic means nobody knows what next week might hold.

That became true for the UMD women, who lost a series at Minnesota this week, and their last series, at Wisconsin, as well. If all goes well, the season will carry on, and carry to the finish to lead up to playoffs and a possible national tournament. 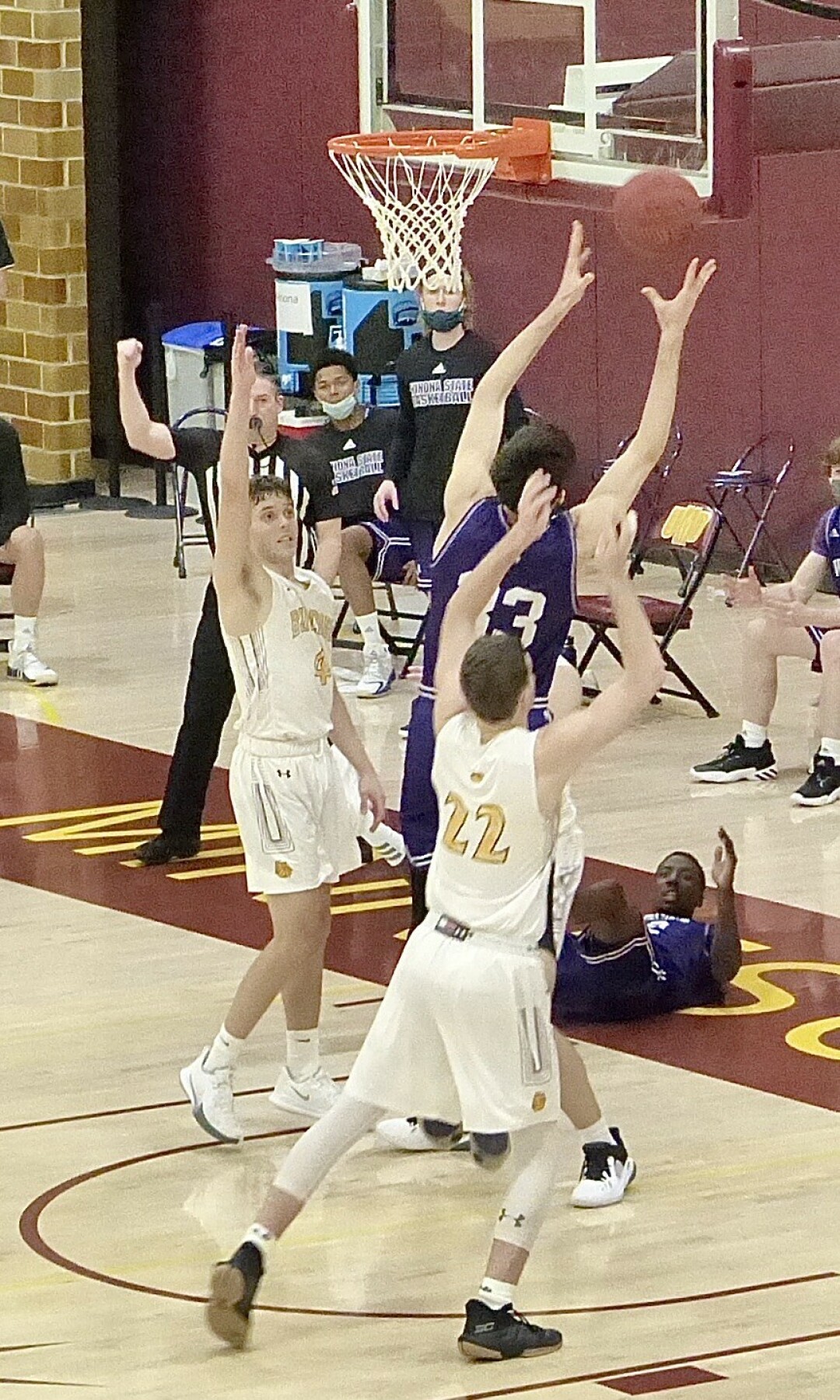 Drew Blair stepped on the court and almost immediately tossed in his first four shots, three of which happened to be 3-pointers, and UMD never looked back, building a 39-27 halftime lead and coasting to a strangely uncompetitive 81-59 victory.

Blair scored UMD’s first 11 points and finished with 27, going 6-for-9 from outside the arc. Austin Andros added 17, Joshua Brown 12 and Charlie Katona 10, the starting unit of three freshmen and two sophomores brushed aside any threats from the senior-dominated Warriors. Keyton Taylor, a quick-striking senior, had 23 points to lead Winona.

Under this year’s structure, the women’s team plays the same opponent on the road when the men are home, and vice versa, and the teams play two games at each site. The UMD women won 68-47 at Winona. Guard Maesyn Thiesen scored 15 and Brooke Olson 14 to lead the Bulldogs.

However, Sunday’s rematches were both scratched because of Covid-19 problems, and this weekend’s men’s trip to Minot has also been cancelled, while the woman await word on their home opener against Minot.

Wild-card playoff week in the NFL is usually a cause for intense interest, but with the Vikings falling flat and now in the process of trying to convince us all how positive the year has been, there is an anticlimactic feeling.

The Green Bay Packers are No. 1 NFC seed and have a bye this weekend, but there are some very intriguing games, starting with the Los Angeles Rams taking on Seattle.

The enigmatic Chicago Bears have to play at New Orleans, which also could be interesting.

I’m sticking with my pick of Seattle to go all the way, and I’m suggesting the perfect Super Bowl would be the Seahawks going up against the Buffalo Bills, who have emerged from an impressive rebuilding to appear to be the best team in the AFC.

When the Vikings managed to squeeze past the Detroit Lions last Sunday in their finale, 37-35, I gained new respect for Kirk Cousins, Vikings quarterback and an easy target to criticize for his inability to find alternate receivers, and for his piling up statistics when the game is in the meaningless stage.

But when it looked like the Vikings might lose, a couple of extremely questionable calls gave the Vikings first downs to extend drives. One hap-pened on a roughing the passer call, after which Cousins told the Lions perpetrator, “I don’t agree with that call, but I’ll take it.” That’s a classy move, for a quarter-back under so much pressure to vir-tually apologize to the defender for an inept call.

Meanwhile, I found last week’s NFL final regular-season games completely anticlimactic, much like the 31-14 Alabama victory over Notre Dame in the semifinal of the bogus NCAA playoffs.

What saved the weekend for me was the unbelievable 49-28 romp Ohio State inflicted on heavily favored Clemson in the other semifinal.

The pride of the ACC, Clemson had avenged its only loss, to Oklahoma, and was poised to hammer Ohio State in the Sugar Bowl semifinal and create the umpteenth rivalry game against Alabama for the (ho-hum) national championship.

With all the talk of which Alabama guy, or Trevor Laqwrence, Clemson’s quarterback, would win the Heisman as the best player in college football, Ohio State’s Justin Fields absolutely picked apart Clemson’s defense, completing 22 of 28 passes for six touchdowns, and 385 yards. Amazing performance.

At the start, Clemson’s Trevor Lawrence helped his team take 7-0 and 14-7 leads in the first quarter, only to have the Buckeyes tie it 14-all after a quarter. Then Fields lit it up in the second quarter, throwing three touchdown passes to receivers who simply had too much speed and ran past defenders in a 21-0 second quarter for a 35-14 halftime lead. Fields never let up, and while Lawrence wound up 33-48 for 400 yards and two touchdowns, and an impressive passer rating of 148.3, Fields was 22-28 for a 257.6 passer rating!

Trey Sermon, a quick, tough and elusive running back, carried the ball 31 times for Ohio State and gained 193 yards and one touchdown. He gained 61 more yards by catching passes from Fields, who played after absorbing a violent hit that sent him to the sideline for a second-quarter play that got Clemson star linebacker James Skalski ejected for targeting. Fields came back in one play later and threw a 9-yard touchdown pass for a 28-14 lead. He tried to protect an obvious rib injury the rest of the way, but didn’t hesitate to launch 40 and 50-yard bombs for more touchdowns.

The championship game isn’t for another week, and Alabama will be heavily favored. But if Ohio State can summon the template of that perfect game against Clemson, the Buckeyes could indeed win the national championship.

A couple of seasons ago, when Matt Dumba got injured, I disagreed that it would be the end of the Minnesota Wild’s chances. My theory was that I had seen Jared Spurgeon enough to know he could become a prominent NHL rushing defenseman, and he would be given room to rush with the loss of Dumba. That turned out to be an accurate projection, and with Dumba’s return to health, the two of them provide two exceptional offensive defensemen.

This week, the Wild made the move to name Spurgeon the new captain of the club, replacing Mikko Koivu, who was sent packing after last season. Spurgeon is a quiet, articulate speaker, not a rah-rah type, but an intelligent source of support and all-out team work-ethic.

Training camps have opened, and Spurgeon could give a needed lift to a Wild team that needs to establish and identify its offensive character and team personality. He will get able support from Zach Parise and Bob Suter, who will remain assistant captains. As they prepare for the new season, we can all prepare to watch a lot of their games starting at 9:30 or 10 p.m. on the West Coast because of the NHL’s decision to put the Wild and the St. Louis Blues in the West, with Colorado, Arizona, Dallas and the California teams in Anaheim, Los Angeles and San Jose.