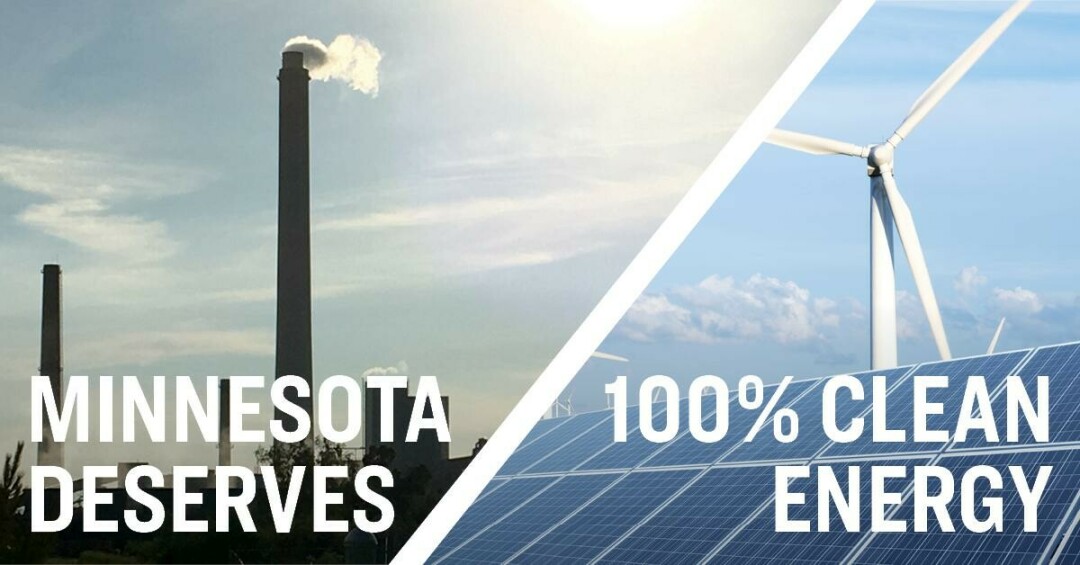 Though admirable, the truth is that most of the clean energy adoptions made by Minnesota Power have been mandated through legislation, previous Integrated Resource Plans, or demanded through community-led initiatives such as the new Lincoln Park Solar Garden in Duluth, spearheaded by Ecolibrium3, and the solar garden planned for Grand Rapids, MN, supported by the Itasca Clean Energy Team, a citizens group promoting renewable energy. Congratulations, indeed, to the people behind this work over the course of many years to move Minnesota Power to use more renewables in its energy portfolio.

The other 50 percent of Minnesota Power’s energy portfolio, however, still includes fossil fuels, such as the Boswell 3 & 4 coal burning power plants in Cohasset, MN. Additionally, Minnesota Power plans to add a fracked gas power plant in Superior, WI, the Nemadji Trail Energy Center (NTEC), the cost of which ($700 million) would be passed on to Minnesota Power and Dairyland Power Cooperative customers. Higher rates for more fossil fuel carbon pollution that would amount to an extra 1 million tons of carbon annually?

In light of the climate crisis which has impacted our local economy and infrastructure through several rain storms of massive proportion, causing flooding, destruction of the lakewalk, homes and roads, the imperative to act immediately to do our part to reduce our greenhouse gas emissions is clear. Minnesotans are already experiencing rapid increases in average temperatures, fewer below 0 degree days and the western basin of Lake Superior is already warming faster than most U.S. bodies of water.

As the price of renewable energy continues to drop relative to fossil fuels, it seems as if Minnesota Power would want to move forward with increased speed to an even greater percentage of renewable energy at a lower price, instead of the snail’s pace it has taken. And then, adding more fossil fuel in the form of fracked gas, seems like moving backwards rather than forward to a cleaner, healthier supply of electricity for its customers. The UN International Panel on Climate Change has determined that delaying emissions reductions may have irreversible damaging impacts on our natural systems.

This “milestone” begs the question, then: What is Minnesota Power’s vision for the next 15 years which will inform its next Integrated Resource Plan (IRP), to be submitted to the Public Utilities Commission in February? While the details haven’t been finalized as yet, the public has a voice and is urged to tell Minnesota Power what are fair, just, and effective measures that will benefit all its customers and the wider Minnesota community.

Specifically, the goal must be a transition to 100 percent clean energy, recognizing that natural gas is fracked gas, another fossil fuel, emitting carbon dioxide and methane, not to mention the toxic chemicals used to extract it. Minnesota Power’s NTEC is unnecessary, expensive, and this project needs to be shelved. Renewable energy includes more community solar gardens to support accessibility and affordability as well as increased investment in wind, storage and efficiency measures. Plans must be laid to retire Boswell 3 & 4 coal burning power plants.

A just transition means support for workers and diversification of economic development in the communities most affected by the change from fossil fuels to renewable energy. Support for workers includes preserving pensions and healthcare, engaging workers in discussions of transition support such as offering rights of first employment for remediation and training for careers in clean energy.

Clean energy growth should be designed to ensure equitable access to all of clean energy’s benefits. Transitioning to a 100 percent clean energy economy shouldn’t leave anyone behind- it’s an opportunity to address disparities caused by systems of oppression. Communities historically impacted by pollution should have fair access to jobs and economic development opportunities.

Finally, the next IRP needs to include a plan for clean, smart electrification of transportation and buildings. Developing a plan for investing in the expansion of electric buses for public transit and schools, while prioritizing under-resourced communities and those with the highest air pollution, makes sense and will greatly improve the health of these communities. Building out vehicle charging infrastructure across northern Minnesota will stimulate the spread of clean vehicles. Working with local communities to install solar arrays wherever possible is essential

Minnesota Power customers envision a future of 100% renewable energy that addresses the climate crisis, keeps energy bills affordable, and benefits all Minnesotans. To make that future a reality, let’s call upon Minnesota Power to dedicate itself to a just transition away from fossil fuels in the utility’s energy resource plan, rate structure, and community engagement programs, and to commit to this vision in its 2021 Integrated Resource Plan (IRP).

As a resident of northern Minnesota and/or a customer of Minnesota Power, here are some ways to take action and lend your voice to its plan for the next 15 years which will define its 2021 IRP:

• Sign the petition to Minnesota Power asking them to transition to 100 percent clean energy.

• Write or call your Minnesota legislators to urge them to support a 100 percent clean energy future for Minnesota.

• Contact the Duluth City Council and Mayor Larson to voice your support for 100 percent clean energy for Duluth.

• Take action locally by engaging with the Citizens Climate Action Plan, a citizen-led campaign to reduce Duluth’s greenhouse gas emissions and move toward a sustainable and equitable future for Duluth.

• Join the Duluth Clean Energy Team with Sierra Club to help build the climate justice movement in the Northland.

Linda Herron is a member of the Sierra Club Northstar Chapter and the Duluth Climate and Energy Network.