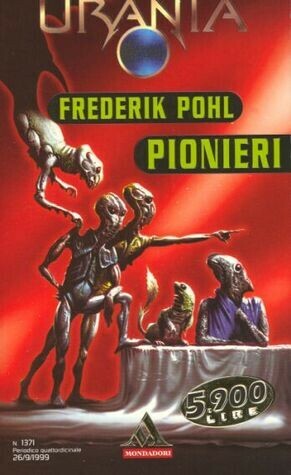 One of my favorite kinds of science fiction stories are ones which describe alien civilizations, and one of the best I know at writing those stories is Alan Dean Foster, the author of novelizations of “Alien” and some of the early “Star Wars,” neither of which had any alien civilizations to speak of. The only thing we know about the Alien is that she wants to implant her larvae into us and, while there are many odd-looking creatures in Star Wars, we are told nothing about them personally. There is a Wookie, and a Yoda and they sort of talk.

Frederik Pohl is one of the old-timers of syfy, so I’ve read a lot of his stuff. I read “The Starchild Trilogy”, which he wrote with Jack Williamson just recently. I blame that on Williamson. It was absolutely terrible.

“O Pioneer!” is about Evesham Giyt, a computer expert and thief. He works for several companies, straightening out their records while skimming a little for himself. These funds go into untraceable bank accounts. Giyt lives with his girlfriend, an ex-prostitute now a student, in a cramped apartment in Wichita. He hears an ad looking for applicants to go to a new planet. He manufactures a resume for himself that would be hard to pass up, but it seems they only want married couples, so he manufactures one for his girlfriend as well, and asks her to marry him. She says yes, so he prints out a license complete with all the necessary signatures.

It would take a very dim bulb to buy the fiction concerning the discovery of the planet Tupelo, and the subsequent return with a portal which will transfer passengers and materials instantaneously between worlds. The story is that the portal was invented by Dr. Sommermens on the way back.

Anyone going to Tupelo quickly finds out that there are five other races established there already, and the portal was given to the humans with the warning that they should not attempt to take the portal apart, or they would risk a tremendous explosion. The good doctor has since fallen ill, and so can’t be disturbed by journalists who would like to question him about it.

Ex-Earth, the company funding the immigration, is duly impressed by the Giyt’s resumes, and they are quickly on their way. They meet Hoak Hagbarth, the Ex-Earth representative, who sets them up with a furnished house.

Tupelo, they find, is an Earth sized planet which is mostly ocean. There is an Australian-sized continent at the North pole where there is some mining and manufacturing going on. The main inhabited island is part of an archipelago situated at the equator. The temperature is mild, the days are almost 34 hours long, Earth time. There are no large land animals, but the ocean is very different, being filled with large predators.

The Slugs were one of the first races to arrive. They built a dam, which formed Crystal Lake, and a hydroelectric plant. Their leader is the Principle Slug, and they take care of all the excavations, sewer lines and water lines below the surface. They like moist conditions, and they live in Slugtown, which is on the mud flats near the jungle, where they build their homes. The Slugs appear to be the only race which has a religion. Anyone passing by Slugtown in the evening might hear them singing, although to most people, it sounds like burblings and slurpings.

Evesham and his wife first meet the Petty-Primes when their children play with the neighbors children. The Petty-Primes are small, hairless and tailless primates who live in barracks. They are very long lived, and they aren’t mature until about 30 years. Their leader, The Responsible One, offers Eversham a ride in his skimmer to meet the suborbital rocket from the Pole, where he meets one of his daughters, who has just completed her shift there.

No one knows where the Kalkaboo’s home planet is, but it was obviously larger and hotter than Tupelo’s. They are roughly humanoid, with no fat and large elephant ears. Their leader is called the High Champion, and it is their practice to set off firecrackers at dawn. These are to expiate the sins committed on the previous day--the larger the sin, the larger the firecracker.

The Delts were the last race to arrive before humans. They built the fusion power plant on Energy Island. As another annoyance to humans, they are not allowed to inspect that plant. Their leader is called the General Manager. They aren’t unfriendly, but their diet is largely sulfurous, which gives them a bad odor. A Delt skimmer pilot has a conversation with Giyt, asking him if he’s familiar with Earth-liar Kepigay, who wrote “Man Approaching Death in Relationship to Ocean.” He was referring , of course, to Hemmingway’s “The Old Man and the Sea,” which he said he had in aboriginal folk lie study.

Eversham’s most cordial relationship is with Mrs Brownbenttalon, the Devinely Elected Savior of the Centaurians. There is no good explanation for that title, since the Centaurians are not in the least bit religious, except to say that the translator programs are not 100% reliable. Mrs Brownbenttalon looks like a large, curly-haired anteater. Her principal husband is about the size of a chipmunk. He rides by her ear so he can talk to her, while her secondary husbands ride farther back and pour drinks when they have company.

Evesham is elected mayor, and is also talked into joining the fire department. It seems there are a lot of brush fires in the dry season. The fire chief turns out to be the oafish Will Tschopp, Hoak Hagbarth’s right hand man.

As mayor it is part of his job to attend the Joint Governance Commission, where members of all the races meet to bring up their concerns. The other races get bent when humans call the planet Tupelo. They had named it the Peace planet long before humans arrived. The document that all races had signed on to specified how peace would be maintained, and absolutely prohibits any weapons.

Evesham starts asking embarrassing questions, and falls out of favor with Hoak Hagbarth, who circulates a recall petition to try to remove him as mayor. Mrs Brownbenttalon sympathizes with him, but she can’t vote on the mayor. She does introduce him to her daughter, Miss Whitenose, and invites the Giyts to Miss Whitenose’s First Fuck party. The Centaurian diet is similar to human vegetarian food, except, he is told, for bubbly drinks, which make them fart.

They are not quite sure what to expect at the party. Three potential husbands for Miss Whitenose had been purchased from Mrs Ruddyblaze, and they were all working feverishly trying to impress her. When she finally makes her choice, he happily jumps in her fur, and they retire to a private room. The Giyts breathe a sigh of relief, and then Mrs Brownbenttalon tells them not to worry, they have a video camera set up to record everything, so the offspring can see themselves being conceived. “Similar to human wedding album,” she tells them, and they have to agree that it is very similar.

It is near conference time, when delegates from all the home planets are invited to inspect what has been accomplished on the Peace planet. Unlike the makeup of the Earth immigrants, which is 100% Americans, the Earth delegation has a global representation. They are going to the Pole, so Giyt wangles a seat from his Petty-Prime friends. Once there, he does some sophisticated snooping, and finds that his suspicions were justified.

I enjoyed this book much more than I probably should have, given the absurdity of one of its central premises. When Giyt is mayor, he attends the Commission meetings, and brings back the complaints to Hoak Hagbath, who apparently has the final say in everything. Since he represents the least advanced race on the planet, it is absurd that he would have this kind of power. Maybe the story wouldn’t have worked otherwise, but I just ignored that part, and relished the intra-species relationships.

This book came out in 1998, but the U.S. president very much resembles Donald Trump, and it is easy to see Hagbarth and his friends wearing MAGA hats. It is a fun read.