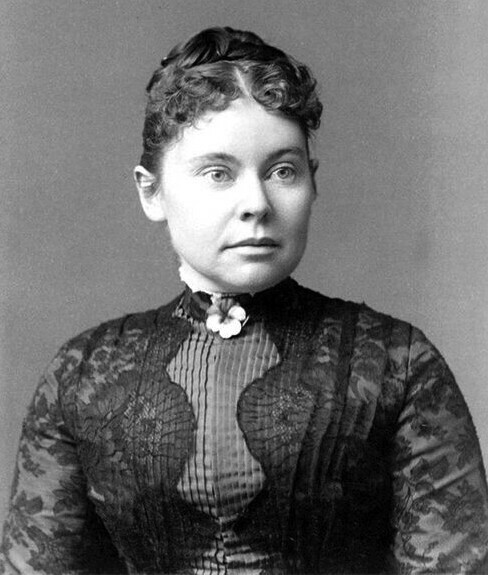 Lizzie Borden took an axe
And gave her mother 40 whacks.
When she saw what she had done,
She gave her father forty-one.

This, I am told, is a nursery rhyme. I know psychologists say we should not shield our children from knowing about the family squabbles, but isn’t this carrying things a bit too far? I admit, when I was thinking of this rhyme, I thought the protagonist was Lucrezia Borgia (same initials, so I was close). That was silly of me. Lucretia was the daughter of the Pope, who excelled at finding husbands for her, so she wouldn’t kill him, and she was much too genteel to use anything as flamboyant as a hatchet. She much preferred poison, from all indications. She was married three times, and had a few lovers on the side, so she had plenty of people to practice on without using her parents. Her mother was just one of her father’s mistresses, so the Popemobile must have been a lot sexier in those days.

The Chinese have one character that means “woman.” Two of these characters together mean “an argument.” I have been told that this is because Chinese men tend to bring their wives to live with them and their parents, so this is between wives and mother-in-laws. I’m not so sure.
There are a lot of Daddy’s girls out there, but Mama’s girls are a lot harder to come by. I’m not saying that all women hate their mothers, but their relationships are often somewhat strained. In my own clan, the mother-daughter relationships are strongest in the most religious families. I’m guessing that it is because they do a lot of praying together, so they have mutual interests, and it’s hard to fight with your head down. Outside my family, the only mothers I know who were BFFs with their daughters had a mutual interest in staying drunk together for the biggest part of the week.

When my first wife died, I met her three sisters and found that they all had problems with their mother. Of course, her brother didn’t come to her funeral, either, and he only lived in Minneapolis. He was married to a society girl, and I think he was embarrassed by his parents, who were “hicks.” My second wife also had problems with her mother when we were first married, but I think they were pretty much resolved before she died, although they were never close.

Milkily, silkily
Female Arachnida
Wraps up her mate for her
Offspring to feast.
When she is asked about
Connubiality
She simply says that “my
Husband’s deceased.”

When it comes to crimes of passion, people have nothing on the insects. Some spider females treat their mates rather badly, and the praying mantis has been known to eat her mate while he is still in the act. This is carrying love bites to the extreme. You would think this would discourage the male, but apparently, he just keeps on going as though nothing had happened. The course of True Love never runs smooth, is his attitude. I think there are human males who might do the same thing, if we could just find a woman with sharp enough teeth, and a predilection for intense S&M.

Carefully, prayerfully
South Asian Mantidae
Perched in the branches and
Looking so cute,
Bites off the head of the
Paterfamilias
Washes it down with a
Frog and a newt.

It turns out that the male mantis is the most nutritious meal the female mantis can eat. I suppose it IS a diet of greens in the strictest sense of the word. When they eat their mate, they lay more eggs that hatch more vigorous larva. Mantises have been known to eat hummingbirds, and National Geographic will be glad to show you a picture of that if you have the stomach for it. It’s pretty gruesome, because they start by eating the brain through an eye socket.

The MeToo movement shone a light on some of the worst excesses of male domination. It got rid of a couple of serious predators, and also gave politicians in both parties an opportunity to throw Al Franken under the bus. He was a thorn in the side of the Republicans, and was too progressive for the more conservative Democrats. The MeToo movement has not reached China, because a Chinese girl told me that the government there does not want to interfere in a man’s right to beat his wife. They try instead to get the man to promise to be better next time she does something to anger him, like serving him tea from the wrong side.

There was no MeToo movement here many years ago, when I ran into Old John on a Saturday night. “Ken,” he said, “When I get home, I’m going to give her one right from the floor.” and he demonstrated his uppercut move — a couple of times, in fact.

If I had any sense, I would have called and warned her, but I was young and didn’t know any better. So I went to work on Monday morning, and I ran into his partner. “Where’s Old John?” I asked.

“He’s still in the hospital,” he told me. “He came home last Saturday night, and his wife hit him with a chair as soon as he walked in the door.”

So the course of True Love isn’t smooth for humans, either. Or does this fall into “the best laid plans” category? In any case, Old John was out for a week, and when he came back, he was very quiet.