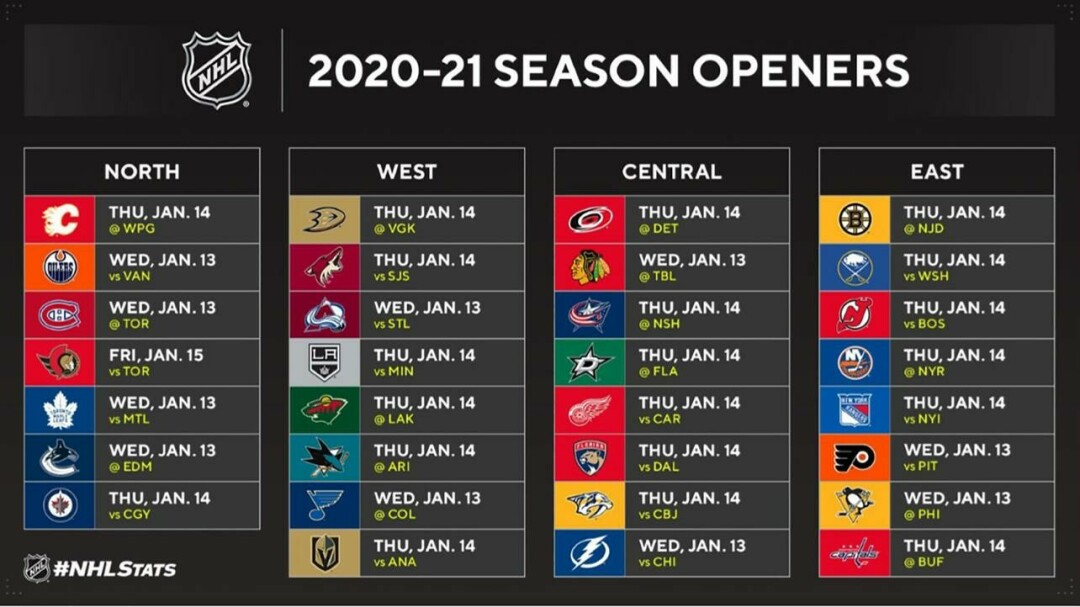 CARLTON PEAK... I’ve been waiting to say this for some time now; NHL training camps will begin this Thursday as the seven clubs that did not get into the Stanley Cup tourney will kick off their camps. For the twenty-four teams that did make it in, camp will begin on Sunday, January third. There will not be any preseason games in these strangest of times, and the agreed-upon 56 game schedule will face off on January thirteenth with five games slated for that night. The season will run through, barring any unforeseen problems, to May eighth. The league has released a schedule, and by and large, it is complete but has no listed game times as of yet.

All regular-season competition will be divisional, and I can see a few “ugly” games here and there as teams embark on their 6th, 7th, and 8th games against one another. It only stands to reason. Are the Wild and Blues going to be buddy-buddy after playing each other multiple times in a short window? I might be wrong, but my Magic eight ball keeps saying no, these teams are not destined to be friends anytime soon, if ever. So, there could be some interesting late-season games awaiting us, particularly if there are playoff positions on the line. Because of the effect of the COVID pandemic on all businesses, the NHL has had to make temporary changes to accommodate the restrictions in place for the public and the business world. The biggest of these alterations is the temporary realignment of divisional play. These short term changes have been made, and I will note them and try to handicap how these divisions will play out as the regular season unfolds.

The first change, and the most reflective of how the virus has impacted business and sports, has occurred north of the border. Due to border crossing restrictions, the seven Canadian teams have all been placed into their own division. This is understandable, and the league had little choice here. The league DID have a choice, though, in what to call this division, and their creativity has failed miserably in simply naming this division the “North.” Someone was probably up all night coming up with that. I had been lobbying for this to be called the “All-Canada” division. It just has an excellent sound and pays homage to hockey’s place in the country’s cultural fabric.

In the North are; VAN, CAL, EDM, WIN, TOR, MON, and OTT. So who is the power team here of this group? I believe that the Leafs have the most talent here and the best player in Auston Matthews. MON had the best offseason in terms of solidifying its roster. CAL obtained an upper-level netminder in Jacob Markstrom. EDM still has the one-two punch of McDavid and Draisaitl but have been challenged to balance their roster. VAN loses Markstrom but lands Braden Holtby. WIN is still trying to offload the young scoring threat, Patrik Laine. And OTT is still improving, but seemingly at a snail’s pace. I like an order of finish of TOR, CAL, MON, and EDM for the 4th playoff spot.

The WILD is moving to the West for this season. That group will feature; ANA, ARI, COL, LAK, MN, SJS, STL, and the VGK. Wild divisional road games will be one to two hours later, so that could affect TV ratings. And if I’m rating the strength of this group, the Wild aren’t in the top three. I see that as being COL, STL, and the VGK. Of the rest of the group, I feel that the Wild have as good a shot at the 4th playoff spot here as anybody, provided they don’t create the usual Wild regular season “problems.” That would be blowing games against teams they should beat and no-showing about five games a season. If they do that this year, they’ll be on the outside looking in. For now, I’ll say they get in—the West order of finish; COL, STL, VGK, and WILD.

The realigned Central has CAR, CHI, CBJ, DAL, DET, FLA, NSH, and TAM. My thoughts here are that the power clubs are TAM, CAR, CBJ, and DAL. The CHI netminding is quite unsettled at this point. DET is still rebuilding. FLA coach Joel Quenneville will enter his second year there, and their massive signing of all-world goalie Sergei Bobrovsky was a total flop last year. And I saw an article earlier today that said that NSH was “back,” and I don’t buy that. My top four there are as stated; TAM, CAR, CBJ, and DAL.

The “new” East has BOS, BUF, NJD, NYI, NYR, PHI, PIT, and WAS. There are some clubs here that have more questions than answers. They are WAS, PIT, and BOS. These three flamed out in the SC tourney last fall. WAS has goalie issues; they landed Henrik “the King” Lundquist from the NYR, who will sit the season out with cardiac concerns. PIT is unsettled in goal after losing Matt Murray, and how does BOS handle some roster changes, which appear to include NOT re-signing their Captain Zdeno Chara. BUF lands Taylor Hall on a one-year deal, and I see them as an “emerging” team at this point. The NJD are still in a rebuild. I see a finish here of PHI, NYI, BUF, and the NYR.

This year’s Stanley Cup tournament will return to the 16 team format, with the top 4 teams from each division getting in. Each series will be best-of-seven, and there will be four rounds. The first two will feature division play, with the four winners advancing to the semifinals after being reseeded for regular-season point totals. And the way this could play out doesn’t mean that it’s for sure there will be a West versus East SC Final. So, it could be chaos, and it promises to be interesting.

AS FAR AS THE tourney goes, we will experience another unusual season due to the virus, and that will play into how the tourney will unfold. There will be no preseason to experiment with your lineup and run different plays and so on. There will be NO inter or intra-conference play. You will have almost no idea how you match up against many teams before the tourney. You could make some educated guesses, but that’s it.

Then, there are the usual upsets, injuries, and the like that can change some team’s seasons, and thus fortunes in a split second. There’s one or two of these almost every year. DOC’s Sports Service has listed odds of COL at +700, the VGK at +700, and TAM at +800 as Cup favorites. The WILD, by comparison, is at +5500, the 27th team listed in the odds. That’s probably about right, although I am still interested to see what the team will have for this season. With Matts Zuccarello out for an extended time, that could open the door for the young Marco Rossi to get on the big roster. Al Stalock is out, too, so the team brings back Andrew “The Hamburglar” Hammond. PEACE