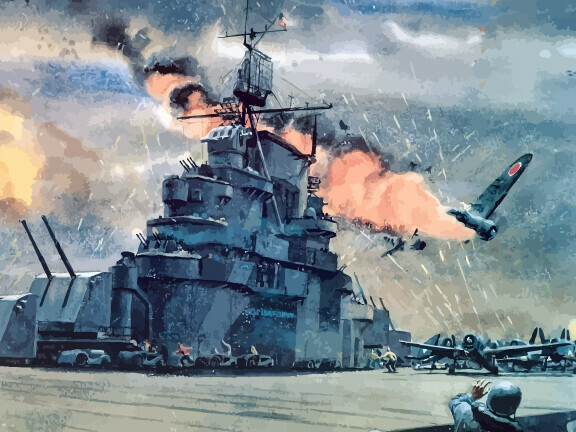 In October 1944, after three years of war in the Pacific, our forces had finally gained the upper hand in the island-hopping war in the largest ocean on earth.

I was 12 years old when I saw films of Japanese aircraft loaded with bombs diving and crashing on our ships, killing sailors and sinking ships.

For me, these suicidal acts were unbelievable at first. But then I learned that the Japanese military culture was different than ours.

About 3,800 kamikaze pilots killed themselves while sinking and damaging many ships and killing at least 7,000 naval personnel.

Emperor Hirohito and the Japanese High Command recognized the only way to win the war was to sink our aircraft carriers and escorts. They asked for volunteers to fly suicide missions. The effort was called “kamikaze,” which means “divine wind.”

The term had been used since the 13th century when a typhoon dispersed and sunk the ships of the Mongol leader Kublai Khan invading Japan.

In November and December 2020 we had another divine wind taking place with King-Emperor Donald, the “Chosen One” according to evangelical Christians, marshaling his suicidal legal forces to overturn an election God’s messenger lost by seven million votes.

The Arizona Trumplican Party has called for its followers to be ready to “give their life for this fight.”
Thousands of militia members in both red and blue states marching and strutting with their AR-15s have been put on alert by a paranoid psychopath. Georgia militia members have been shouting “Victory or Death!” during three recounts.

Blue state governors have been threatened with kidnapping and death attempting to use science to control a pandemic. Secretaries of state and election officials have received death threats by the thousands on social media.

We can’t ignore the evidence of the divine wind and the suicidal kamikaze attacks by Trump’s political forces.

New voter suppression acts have passed in Georgia for the Jan. 5 run-off votes for the two Senate spots.

More than 50 lawsuits have been filed so far. Most of them have been dismissed by bemused judges. Harassment and death threats against election officials and workers have been increasing since the election.

Georgia official: ‘Someone is going to be shot and killed’

We are in the middle of dangerous times: a virus killing 3,000 a day; a country divided by race, income, education; “historical” monuments dedicated to the days of slavery; white minority status coming soon; and a paranoid psychopathic Great Leader who has created a powerful armed cult.

We are on a knife’s edge of losing “it.”

“It” stands for country.

The American Psychiatric Association (APA) estimates that six percent of our population wanders in and out of mental disabilities each year. The APA’s latest Manual of Mental Disabilities has a section defining sociopath and psychopath. Every citizen should read the section and then decide whether Donald J. Trump fits the description.

He hasn’t changed since his parents sent him to military school for discipline. Narcissism constitutes a dangerous love affair – with yourself. Trump says he loves Russia’s Putin, North Korea’s Jong-un and Turkey’s Erdogan. Not true. He loves only himself.

Here’s some evidence (E) of the trouble we are in:

E-1
At a Georgia rally led by Donald Trump Jr, a speaker warned, “We’re getting ready to start shooting.” Gov. Kemp was told by the Great Leader to “take charge,” invoke “emergency powers,” “get tough,” and “get it done,” and to “cancel the vote.” Trump called Republican Secretary of State Brad Raffensperger “an enemy of the people” when he refused to change the ballot count. Then Trump supporters threatened to rape his wife. The Republican manager of elections Gabriel Sterling told Trump to “stop harassing election workers because “Someone’s going to get shot. Someone’s going to get killed.” Georgia attorney Lyn Wood was widely quoted on social media: “We’re going to slay Goliath, the communists, the liberals. Joe Biden will never set foot in the Oval Office.”

E-2
Right-wing radio host Eric Metaxas volunteered: “I’d be happy to die in this fight. Attorney Joe diGenova said Chris Krebs, Trump’s fired cyber security director, should “be taken out at dawn and shot.” Both called for Trump to declare martial law. Other zealots issued death threats against Vermont and Arizona election officials and their families.

E-3
Four members of a North Carolina militia called Iron March have been indicted for altering semi-automatic rifles to fire fully automatic. The four also discussed killing participants in two Black Lives Matter pro-tests held in Boise, Idaho, and spent time engaged in paramilitary training in Idaho. They specifically plotted to assassinate BLM founder Alicia Garza. One of the objectives of Iron March is to create a militia patterned after Hitler’s SS troops. The group uses the Nazi salute developed by Hitler. One of the men is still an active Marine stationed at Camp Lejeune where I was stationed for two years.

E-4
Perhaps you might remember Air Force pilot Scott O’Grady who was welcomed back to this country as a hero after being shot down in Bosnia in 1995. He now leads Veterans for Trump after campaigning for Trump. Trump just nominated O’Grady to be assistant secretary for defense for international security. He has supported numerous ridiculous conspiracy theories and has called Barack Obama and several generals “sworn socialists,” former Defense Secretary and Marine General James Mattis a “traitor,” and claimed Hillary Clinton and George Soros paid foreign countries to campaign for Joe Biden in 2020.

E-5
If you think the Senate of the DSA is “the most deliberative body in the world” – think again. We turned a Guantanamo Bay “terrorist” loose on the world after 18 years of confinement the other day. We never charged him with a crime because we tortured him – and had no evidence. We are currently spending $540 million keeping 40 terrorists behind bars at a facility where we have 6,000 assorted military police, troops and other government employees. Most agree: “It’s a horrible waste of money.” It costs about $1 billion a year to keep the prison open. Obama tried to close it down 10 years ago. Senate Republicans have refused to do it ever since. Senate Republicans should be called part of “the most denigrated body in the world” because of inaction. I had the pleasure of touring Gitmo back before the Cuban Revolution courtesy of the Marine Corps. It’s a beautiful place that should be turned into a world-class resort instead of an island prison.

E-6
Born-Again Christian and graduate of Liberty University Bob Good was recently elected to represent the 5th Congressional District in Virginia. He probably will not improve the House gene pool. At the Trump “Stop The Steal” protest in Washington on Dec. 12, he yelled at the maskless crowd: “It’s great to see your faces, you get it (I don’t think he meant the virus). You stand up against tyranny. Thank you for saying ‘no’ to the insanity. This is a phony pandemic. It’s a serious virus, but it’s a virus. It’s not a pandemic.” More than 3,000 Americans died from the “insanity” and the un-pandemic on “Stop the Steal” day. Among the other speakers were the lying General Michael Flynn, Alex Jones who said the Sandy Hook massacre of 20 first graders and six teachers was done by the government, and My Pillow CEO Mike Lindell who has called Trump “the greatest president we have ever had.”

E-7
We have hundreds of private right-wing white supremacist militias organized in the 50 DSA; among them are The Base, Three Percenters, Boogaloos, Oath Keepers, Proud Boys, dozens called Patriots, several Michigan militias, and hundreds of others with membership estimated at beyond 100,000. There are only a couple of Black militias recently formed on the “liberal side” and then there is Antifa, an anti-fascist group. Michigan militia members who invaded the state capitol and hatched the plan of kidnapping and killing Gov. Gretchen Whitmer are under investigation. Her response: “I’m not going to be bullied into not following reputable scientists and medical professions.” Firearm manufacturers estimate there are at least 15 million AR-15 style semi-automatic rifles loose in the DSA. No doubt militia members own many thousands of them. And, I would like to know where militia members get the money to travel to protests around the country. Who is supporting them? Is it The Great Cult Leader who told the Proud Boys to “Stand back and stand by?”

E-8
Retired Air Force Lt. General Thomas McInerney flew more than 400 combat missions in Vietnam and later became an assistant Air Force vice chief of staff. He joined Fox News as a military analyst upon retirement. He was dropped by Fox in 2018 after he said North Vietnamese torture had “worked” on John McCain, but unfortunately, he kept on talking. He recently claimed the CIA concealed information about voter fraud that changed computer votes from Trump to Biden. In Military Times he wrote “Trump won in a landslide and the Dems left so many footprints that this TREASON must be stopped! This will be the last free election we have had and I predicted it on Nov. 2 on the Steve Bannon Show!”

E-9
General Michael Flynn, Trump’s disgraced national security adviser who lied to the FBI about his talks with a Russian ambassador, is another military “leader” who has no respect for serving in a democracy. He yelled “Lock her up!” at the Republican National Convention in 2016. He told the “Stop the Steal” crowd that Americans would not allow Biden to be inaugurated on Jan. 20, and that Trump has a “10 out of 10” chance of being the next commander-in-chief.

E-10
A domestic terrorist walked into the Washington state headquarters of the Democratic Party, threatened to blow it up with a bomb, waved a “manifesto” of sorts, and started a fire inside the office. He was later arrested by the Spokane police. The city has always been a center of right-wing groups, conspiracy theorists and militias. Local Democratic chair Nicole

Bishop noted: “Sadly, Democratic Party organizations have been subject to this sort of harassment quite a bit since Donald Trump took office.”

Trump’s “Divine Wind” attack on the election is slowly turning out to be a big smelly fart labeling him a big loser.

It’s fascinating that probably the last shots fired an hour after the war with Japan officially ended knocked a Japanese kamikaze suicide bomber out of the skies attacking the USS Heermann, a destroyer.