Fairies, Celtic music and The Ramones 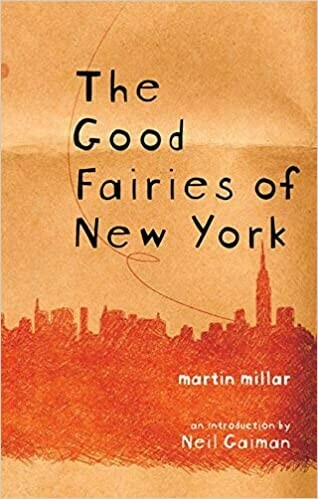 This is a book for every fiddler, who has realized, half-way through playing an ancient Scottish air, that the Ramones “I Wanna be Sedated” is what folk music is really all about, and gone straight into it. It’s a book for every girl with home-dyed hair and fairy wings who can’t honestly remember what happened last night. It’s a book for people of whatever shape and size who like reading good books.

- From the Introduction by Neil Gaiman

I am neither a fiddler nor a girl, but I loved this book immensely. It is one that I’ve read twice, and I will undoubtedly read it again. The story is heartwarming, poignant and very funny. A triple headed Welsh poppy is a central item. It begins and ends where it belongs—as the centerpiece of a Celtic flower alphabet, but in the interim it goes through the hands of nearly everyone portrayed, which includes several humans, two Scottish thistle fairies, and innumerable other fairies of every description.

The two Scottish thistle fairies, Heather MacKintosh and Morag MacPherson, meet when they are entered in the junior fairy fiddling contest. They both play “Tullochgorum” and the judges call it a tie. Unbiased fairies know that the best fiddler is Wee Maggie MacGowan, but Wee Maggie had the measles, and couldn’t compete. She recovers, but it seems that every time she is scheduled to perform, she is the victim of sabotage. Heather and Morag each think the other has cheated, so they first fight, and then become friends. They are both fans of the Ramones, and their dream is to start the first fairy thrash band. They dye their hair and play Ramones tunes on their fiddles while wearing torn kilts.

For Scottish fairies, there are three artifacts which will insure victory for them in any conflict: the MacKintosh sword, the MacPherson fiddle, and the MacLeod fairy banner. The sword is held by Agnes MacKintosh, the leader of the MacKintosh clan, the MacPherson fiddle has somehow been lost, and the MacLeod banner was packed away until our two thistle fairies find it and cut pieces out of it without knowing what it is. The MacLeod sisters, a fearsome quartet wearing their claymores strapped to their backs and daggers on their thighs, are furious, and give chase.

In Cornwall, King Tala’s wizard, Magris, has invented a steam engine, which has prompted the King to set up factories producing goods for sale, requiring that fairies be taken out of their easy existence to work for their living. Among the fairies who dislike this situation are the King’s own children, Tulip and Petal, who run away from home with their friends. They meet some Irish fairies, who help them escape to Ireland, where they meet our Scottish fugitives. They all stop to rest when they find a field of magic mushrooms. Things get a little foggy then, and they all end up in New York.

Fairies in general are pastoral beings, meaning that they are not commonly found in big cities. They are invisible to most people, so they are in danger of being trampled where there are a lot of people walking. Luckily, most of the fairies found their way to Central Park, where there were plenty of bushes to hide in. They are also excellent musicians, and able to play just below the level of human hearing, which affects the mood of humans passing by. Playing a bit of “The Miltdown Jig” and “Jenny’s Welcome to Charley” makes Central Park a much happier place.

In their homelands, fairies are welcomed everywhere, and people gladly leave out a little dram for them. There are plenty of Irish bars carrying Guinness and Jameson whiskey, but sadly, if the Irish fairies want some, they have to steal a thimble full or two for themselves. Luckily there are a LOT of Irish bars.

A few blocks away, there is a theater. Above the theater, there are rooms which the caretaker has illegally rented out to Dinnie MacKintosh, an anti-social, overweight man who is attempting to play a Scottish tune on his fiddle when our two thistle fairies fly into the room and vomit on his carpet.

Dinnie is a not very good bicycle courier who in times of great need, tries to busk on the street with his fiddle, also without much success. He is not very sociable to the fairies, and Morag leaves, but Heather decides she has to stay and help a fellow MacKintosh in trouble. Dinnie says he’s not in trouble, but Heather assures him that he is. She’s heard him play.

Morag flies across the street and meets Kerry, a lovely and talented girl who is building a Celtic flower alphabet for entering in the contest for the East Fourth Street Community Arts Association Prize. She was inspired to do this when she by chance found a triple-headed Welsh poppy. There are lots of boys hanging around her, and Dinnie would like to be, but she’s out of his league. She doesn’t encourage anyone, because she suffers from Crohn’s, an incurable wasting disease of the intestines, which forces her to wear a colostomy bag on her side. Cal, her ex boyfriend who abandoned her when she got sick, had promised to teach her Johnny Thunder’s guitar solos from the New York Dolls album. He is presently trying to stage a production of “A Midsummer Night’s Dream” at the theater under Dinnie’s rooms, where he will play all the music on his guitar. This presentation is also competing for the Arts Association Prize.

There are many homeless people living and dying on the streets of New York. Among them is Magenta, a youngish bag lady who has stolen a copy of “Expedition to Persia”, and now is under the illusion that she is Xenophon, the author. She is fleeing Tissaphernes, the head of the Persian cavalry, otherwise known as Joshua, who is actually pursuing her because she has stolen his recipe for the Fitzroy cocktail.

Heather is determined to turn Dinnie into a human being. He is being threatened with eviction, so she helps him out by picking the lock at the local bank, filling her sporran with money for his rent. The Italian fairies are upset when they see strange fairies robbing their allies’ bank. A Harlem bar owner is surprised with his customer’s sudden taste for Scotch whiskey, but the black fairies have seen where it’s going, and decide they must put a stop to it.

Morag sets the lobsters free at the Chinese restaurant, and the Chinese fairies resent that. Meanwhile, the Chinese spirits are preparing to attend the Festival of the Hungry Ghosts. The ghost of Johnny Thunder decides to return with them. He still wants to know what happened to his favorite guitar, a Gibson Tiger Top, that was stolen from him.

Back in England, King Tala is getting angry. A small rebel group keeps setting fire to his warehouses, and he is still upset about his children running away. He begins to assemble an army of mercenaries to retrieve them, and has Magris conjure up a moonbow across the Atlantic.

The Scottish fairies put aside their concerns when they see fellow Scots threatened by the Cornish fairies, so they send their own moonbow towards Central Park. They have had word that the MacPherson fiddle has been found, which will help to assure victory. Fairies are essentially peaceful, but it seems they are preparing for a major war.

Most of the humor in this book revolves around the fairies perceptions of American life, as opposed to what is familiar to them in Scotland. Martin Millar was born in Glasgow, and is knowledgeable about Scottish politics, Scottish clan relationships, and Celtic music. I suspect that every piece mentioned in this story can be found on YouTube, but I especially recommend Natalie McMasters “Tullochgorum,” which she plays McMasterfully. It is the ultimate test for Celtic fiddlers.