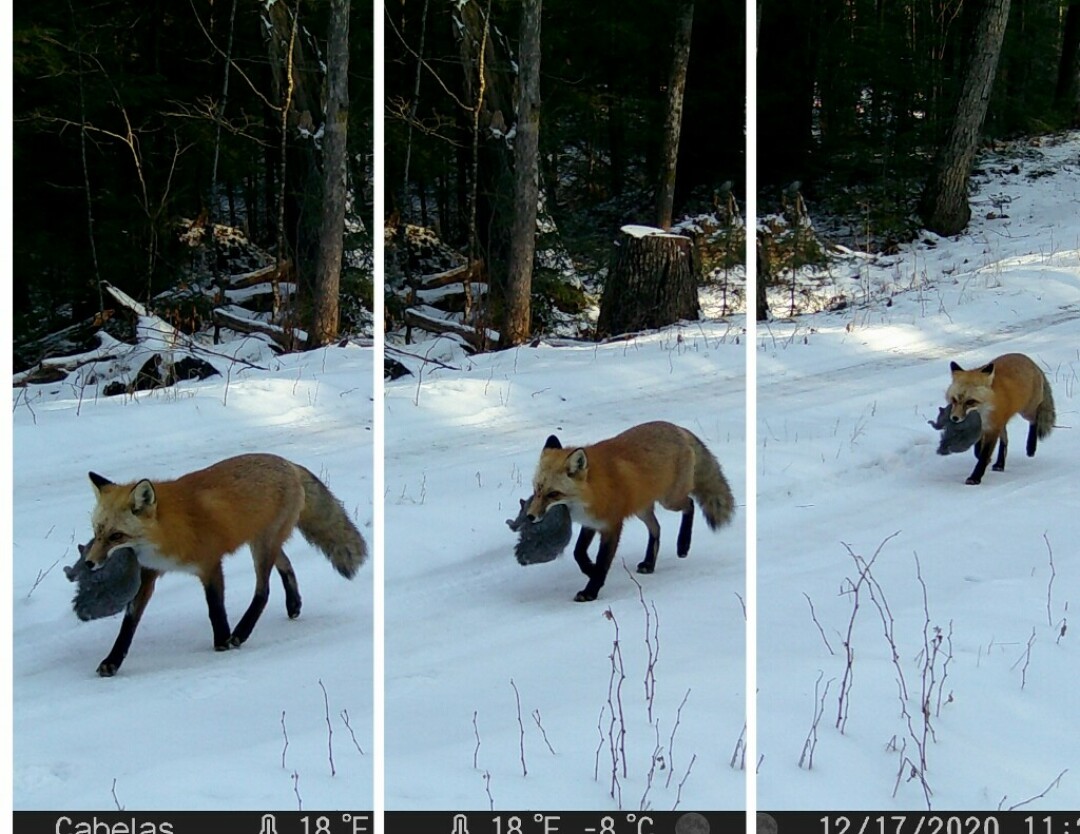 This handsome red fox would have caught his lunch (a gray squirrel) just as I was cooking mine. My trail camera has revealed plenty of action in broad daylight.

My Christmas came early this year. A couple of weeks ago, my dad texted to say that my gift had shipped, and that I should open it right away. So at dusk on Dec. 9, I walked partway down my driveway and strapped my brand-new trail camera to a tree. A thin layer of snow had already recorded this spot as a busy crossroads for critters.

The next morning, I couldn’t wait to go and truly open my present.

While my oatmeal cooled to eating temperature, I threw on a jacket and hurried out to retrieve the memory card. I fidgeted impatiently as my computer recognized the new card and opened up the folder.
There were photos! A second glance was less exciting, though. They were all deer.

Well, the trail cam worked – but I don’t need a trail cam in order to see deer. I replaced the card and let my excitement begin to rise for a second time.

In the meantime, I went for a walk on the lake. Just a sugar dusting of snow on top of glare ice made walking a little tentative, but I was rewarded by the humorous tracks of a coyote slipping and sliding all over, too.

I followed her tracks up the bank and into a little mosquito (and frog) breeding hole temporarily lacking its usual buzzes and peeps. In the middle of the tangled alders – frozen in place – as a large, hairy scat deposit.

Coyote and fox tracks can overlap in size. My neighbor, who also happens to be a professional carnivore tracker for the DNR, told me to look at the heel pad.

Coyotes have a big one, and foxes have a much smaller one, relative to the size of the toes. Using that character, I thought I was seeing tracks of both wild canids on my driveway, but just couldn’t be sure. (Canid = canine = members Canidae or the Dog Family.)

The size of this scat sealed the deal. There was a coyote in my bog. Now, would the trail cam confirm that?

The next brisk morning walk down my driveway was refreshing. It felt good to get outside before sitting down to a day at the computer.

This time when I slid the card into my laptop, up popped the ghostly blur of a wild canid. My eyes (and my Facebook friends) told me fox, but that just didn’t jive with the scat and tracks I’d seen most recently.

Could both foxes and coyotes really be using my driveway so closely in time and space?

You may wonder why that’s even surprising to me. Well, since 2008, when I volunteered with the Yellowstone Wolf Project, and maybe even before that when I was TA for a Wolf Ecology field course, I’ve understood there is a cascading relationship among wild canids.

With fewer coyotes, foxes can increase. By this model, I shouldn’t be finding tracks of both smaller canids in such a small area. I’ve seen wolf tracks nearby – just a mile into the National Forest – but not on my driveway.

What more could my trail cam reveal? 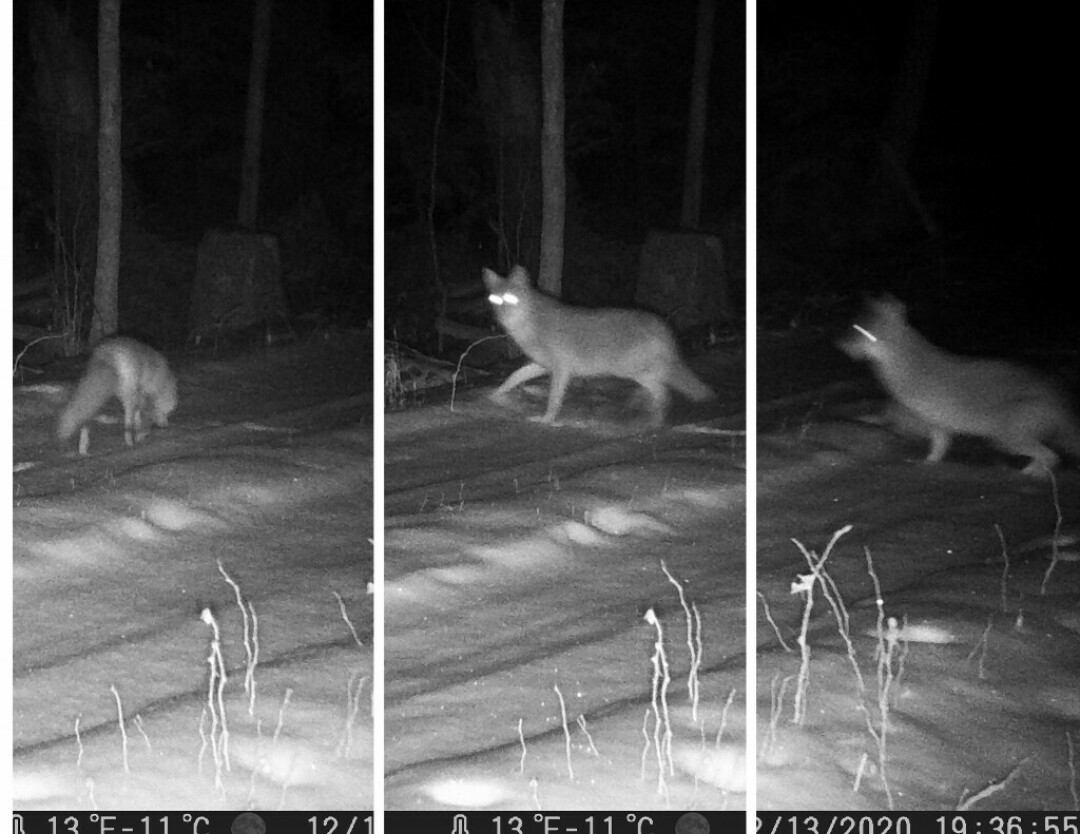 A series of photos from a trail camera shows a coyote bounding across the driveway (two right-hand panels) and a fox trotting along 3 hours later to sniff the coyote’s tracks (left panel). Photos by Emily Stone’s trail camera.

Well, for a couple of days, it revealed a fisher loping down my driveway in broad daylight.
And then, jackpot!

At 7:36 p.m., a coyote bounded across the driveway. Her boxy body, pointed snout and relatively short legs were clear.

Three hours later, at 10:35 p.m. a red fox trotted past – stopped to sniff the coyote’s tracks – and continued on toward the house. The bushy tail seemed almost as big as his body.

Now, challenged by this photo-graphic evidence, I just had to under-stand their relationship better.

Happily, researchers in Minnesota published a paper on the carnivore cascade in 2012, and Google Scholar pulled up a full PDF version available for free.

As it turns out, it’s not as black-and-white as the canids completely excluding each other. I suppose I should have known that.

Even in Yellowstone, I watched both foxes and coyotes scavenge on the carcasses of wolf-killed elk. Each was just wary of their bigger cousin.

In Minnesota farmland, where there aren’t wolves, foxes declined when coyotes increased. In the forests of Northeastern Minnesota, though, where wolves are most abundant, coyote and fox numbers show no relationship, and fox numbers are correlated with their inadvertent protectors, the wolves. When wolf numbers increase, foxes do too. But coyotes are still present.

The data show that an abundance of wolves allow foxes to approach their carrying capacity – which is the number of animals their habitat can support.

Fox populations are controlled by how much food they have, not by how much they are bullied. That said, these relationships don’t show that any of the canids completely exclude each other from the landscape. They can still exist together, just with added stress.

I can’t wait for my trail cam to show me more about their relationship!

So today – my ninth Christmas morning in a row – I took another brisk walk in the gray light of dawn. After a couple of slow nights, my expectations were tempered. I sipped coffee while reading emails and waiting for the photo previews to pop up.

A glance at the thumbnails made me grin. The camera had captured my handsome fox trotting proudly down the drive with a fat gray squirrel in his mouth.

Here’s another cascade: I feed the chickadees. The fallen seed feeds the squirrels. The squirrels feed the fox. And – with my dad’s help – the fox feeds my curiosity. What a gift!