Meet a ‘wine’ made of barley 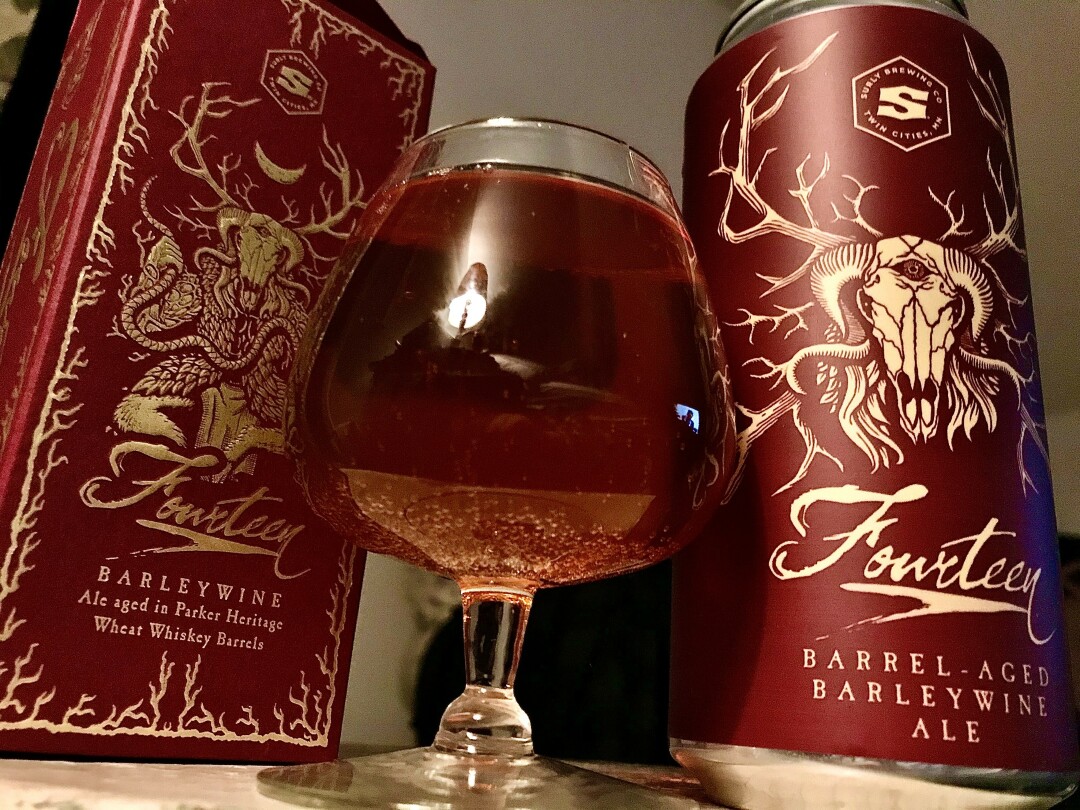 I kept thinking all afternoon about the purple an gold box in my backpack with a cute little bottle of barleywine inside. I was looking for the work day to end so I could take that box home and dig in.

There can be no Christmas, no wintery holidays at all, without barleywine, so I was very happy to find this offering from Surly.

As the name implies, there is nothing else quite like a barleywine. While made of barley, like other beers, it has the higher alcohol content of a wine.

I was first introduced to this unusual style of beer as a young man in England. Barleywines normally come in cute little bottles, smaller than a regular bottle of beer because they are typically twice as potent as your typical lager or ale.

I did not know that when I was introduced to the unique style by some English mates in a little village pub. After I enjoyed my first barleywine so much, they encouraged me to have another, and another...until, finally, I fell off my stool. It was the one and only time that has happened – both letting anyone egg me on to drink and getting so hammered I can’t stay in charge atop a bar stool.

Barleywines are, basically, ales supercharged with big grain bills that result in a sweet malty liqueur, different from any other ale.

While high gravity brews can be traced to ancient civilizations, the actual style known as barleywine is relatively new, introduced by Bass & Co. Brewery in 1903.

The first American barleywine – Old Foghorn – was brewed by Fritz Maytag’s Anchor Brewing in 1975.
Barleywine has an aroma and taste unmistakable and all its own in the world of beer. Its potency has a warming effect that makes it particularly welcome on cold winter nights.

And, so, I was happy to see at my local among a group of specialty winter warmers from Surly, the barleywine they call Fourteen (more on that later). It comes in a neat box that I did not open until I got the package home, and imagine my surprise when, after imagining a cute little bottle inside the box, I pulled out a 16-ounce can.

I don’t know if I can convey the shock of seeing a can in place of the bottle I expected. I had just never before imagined barleywine in a can.

Being a print guy, I fully expected a little booklet or at least a one-sheet inside the box, telling me about its ingredients, maybe a little soething about the barleywine style, and, most importantly, why Fourteen.

But, no, that was not to be. Just the box and the can inside with very little details about the magic ale inside, just that Fourteen is aged in Parker Heritage Wheat Whiskey barrels (whatever in the world “Parker Heritage” might bet).

My mind needs more details than that, so I had to go online to discover some of this stuff, such as this barleywine celebrates Surly’s 14th anniversary. Well, that’s a good thing to know. Can’t think why the brewery did not want to share that in the packaging. Do they simply assume we know all know this fact?

Next, I look up Parker Heritage Whiskey, and have to wonder why they did not want to share more on this unique brown liquor. Parker Heritage is an annual collection released by Heaven Hill (a Kentucky distillery whose brands include Admiral Nelson’s spice Rum, Black Velvet Canadian Whisky, Burnett’s London Dry Gin and Christian Brothers Brandy.

The Parker Heritage Collection is a high-end annual release that raises fund to fight Amyotrophic Lateral Sclerosis (ALS, or Lou Gehrig’s Disease).The series is named for the distillery’s late master distiller Parker Beam, who suffered from ALS. The past seven editions of Parker Heritage have raised more than $1 million for ALS research and patient care. That’s a story you think the brewery would be proud to share.

The barleywine is aged for 10 months in the barrels. Surly acquired the entire run of barrels from the distillery’s 2020 wheat whiskey in order to age Fourteen. They add on the Surly website that Fourteen is a hybrid between the American (hoppy) and English-style barleywine, making it a prime candidate for aging (isn’t that true of every barleywine?.

After getting the over the shock of barleywine in a can, I poured out a portion into a small snifter. It poured a deep copper with a small head that soon dissipated, leaving a seemingly still beer in its wake.
The normal, very distinct and potent flavor is intensified here with the barrel aging imparting a slightly bitter tannin finish. The tannins almost make the palate react as if you were drinking a sour, with lots of prickly assaults to the tongue.

It is also most definitely boozy. It tastes strong and leaves a neat alcohol aftertaste. Did I just take a shot of rye?

I guess I thought of rye because there is a certain spiciness embedded in the flavor of this barleywine.
And just now as I took a sip with my nose stuffed well into the snifter, I took a good sniff and smelled the sweet, earthy smell of a brewhouse in full production mode, with that lovely grainy smell!

Yes, I just confirmed my first impression that this acts as a still beer when I poured more into my snifter. It audibly fizzed in the glass, frosting over the surface with a white head that instantly curled up and disappeared, with just a few groups of tiny bubbles clinging around the perimeter of the surface. You also get a fairly furious but very brief carbonated fizz on the top of the palate – almost a tickle - when you take a sip, but that, too, quickly dissipates.

Did I mention this stuff weighs in at 11 percent? I found mine at Lake Aire Bottle Shoppe.