Unlearned lessons from WWI: The Christmas Truce of 1914 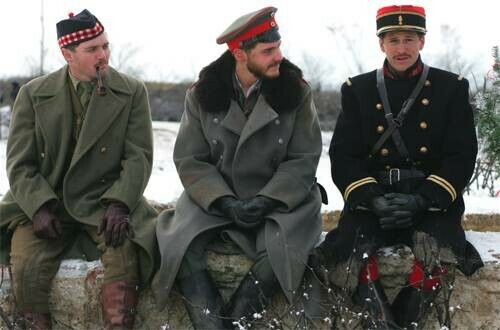 In World War I, as happens to be true in most American wars, the Christian church leadership joined in the patriotic fervor with very un-Christ-like, nationalistic and racial/religious domination stances.

Astonishingly, religious leaders on every side of the conflict truly believed that God was on their particular side. And so the pulpits all over Europe, including British, Scottish, French, Belgian, German, Austrian, Hungarian, Russian and Italian reverberated with flag-waving fervor, with clear messages to their doomed warrior-sons that it was their God-given Christian duty to march off to kill the equally brain-washed young Christian soldier enemies, who were also certain that God was on their side.

Five months into the miserable death and destruction of the perpetually dead-locked trench war (featuring the now-infamous mass slaughter via artillery, machine gun and poison gas weaponry), the first Christmas of the war on the Western Front came around.

Christmas was the holiest of Christian holidays on all sides of the war, but in this time of homesickness and having to live in the cold, rain and snow, the first Christmas of the war had special meaning.

December 24, 1914, reminded the soldiers of the good food, warm homes and beloved family relationships they had left behind – and which they now suspected they might never experience again. The physically exhausted, spiritually deadened, combat-traumatized soldiers on both sides of No Man’s Land desperately sought some respite from the water-logged, rat-infested and now increasingly frozen trenches.

The frontline soldiers on both sides were at the end of their emotional ropes because of the unrelenting artillery barrages. If they weren’t killed or maimed by the bombings, what would eventually destroy many of the survivors was the “shell-shock” (now known as combat-induced posttraumatic stress disorder – PTSD), with the horrifying nightmares, sleep deprivation, suicidality, depression, hyper-alertness and other mental and neurological distresses.

Other common “killers” were the bad food, lice, trench foot, frostbite and gangrenous toes and fingers.

Suicidal “over-the-top” assaults against enemy machine gun nests were stupidly and repeatedly ordered by senior officers like Sir Douglas Haig, who didn’t have to participate in the bloody assaults.

Sir Winston Churchill, in his British naval command role at the time, had obviously learned nothing from Haig’s disastrous tactic when, a year later, he also ordered repeated assaults against Turkish machine gun fire at the infamous massacre of Australian and New Zealand troops at Gallipoli, a blunder for which the disgraced Churchill resigned his commission in the British Admiralty.

The day-to-day horrors of trench warfare were punctuated by the screams of agony coming from the wounded soldiers who had to be left hanging on the barbed wire or lying in the bomb craters in No Man’s Land – their deaths often lingering on for days. The effect on the troops in the trenches who had to helplessly ignore the pleas for help was traumatizing. For any number of reasons, the morale of the troops on both sides of No Man’s Land had hit rock bottom during the months approaching Christmas.

Christmas in the trenches

So, on December 24, 1914, the exhausted troops settled down to open Christmas gifts from home, expecting to have some respite from the war for a day or so. A magnanimous (and deluded) Kaiser Wilhelm had even ordered 100,000 Christmas trees with millions of ornamental candles to be sent up to the German front, expecting that such an act would boost troop morale.

Using the supply lines for such militarily unnecessary items seemed to be an acceptable investment for the over-confident emperor, but his generals disagreed. Nobody, however, suspected that the Christmas tree idea would backfire and instead be a catalyst for a famous event in the history of peace-making that was nearly censored out from recorded history.

That spontaneous event, the Christmas Truce of 1914, was expressed in a variety of ways at a multitude of locations all along the 600 miles of trenches that stretched across France, but it was an event that would never again be duplicated in the history of warfare.

The tradition that has emerged from this true story was that, in the silence of Christmas Eve night, the Germans started singing Christmas carols, with the British, French, Scots and Canadians doing the same, the two sides joining together bilingually when the Germans sang “Stille Nacht.”
Before long, the divine spirit of peace and “goodwill toward men” prevailed over the demonic spirit of war.

While participating in the group singalong, the men sensed their common humanity, and the natural aversion to killing emerged, overcoming the brain-washing they had all been subjected to since basic training. And for a precious day or two, these men rose to a level of humanity that would not allow them to continue killing other humans even if ordered to do so.

Individual unarmed soldiers, disobeying orders from their superiors, cautiously stood up and walked out of their trenches into No Man’s Land. Nobody began shooting and slowly both trenches emptied out and a unique Christmas eve celebration began that had never happened before and – if the world’s military establishment has anything to say about it - will never happen again.

Soldiers that were deadly enemies just moments before shared chocolates, cigarettes, beer, wine, Schnapps, pictures from home and soccer games. Names and addresses were exchanged, and every soldier who genuinely experienced the dramatic event was forever changed.

Of course, on their way each soldier had to step around shell holes and over the frozen corpses of their dead friends, which were given respectful burials the following day; former enemies helping one another with the solemn job. 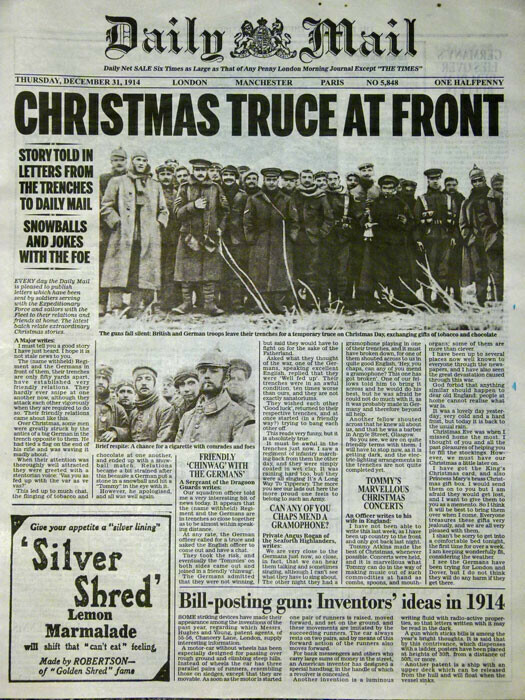 Fostering peace on Earth in time of war is considered treason

Fraternizing with the enemy (and refusing to obey orders in time of war) has historically been regarded by military commanders and politicians as an act of treason which has always been severely punished, sometimes by summary execution. In the case of the Christmas Truce of 1914, trying to avoid drawing public attention to this potentially contagious incident, most commanding officers threatened various punishments but only a few executions took place.

One punishment that many of the newly antiwar German soldiers faced was their transfer to the Eastern Front where they would then be expected to kill and die in the equally suicidal battles against Orthodox Christian soldiers from Russia.

The prize-winning movie (almost winning the Academy Award for Best Foreign Film) that beautifully characterizes the spirit of the Christmas Truce is Joyeux Noel (French for Merry Christmas). Joyeux Noel tells the moving tale that has been adapted from the many surviving stories and letters home from soldiers who had been there.

This unique story of war resistance needs to be retold over and over again if our modern-era of false flag-generated wars of empire and corporate domination are to be effectively de-railed. These never-ending wars – always followed by armed occupations that inevitably generate armed resistance and revolt later - are fought by naïve but thoroughly indoctrinated, macho adolescents – many of whom are from devout Christian families.

These not quite emotionally mature adolescents are at high risk of becoming spiritually damaged by active engagement in the “killing fields.” Indeed, combat soldiers are often doomed to a life overwhelmed by the realities of combat-induced PTSD (or sociopathic personality disorder), with suicidality, homicidality, loss of religious faith and traumatic brain injuries.

Of course, militarists of every era in history do whatever they can to prevent soldiers from experiencing the humanity of their enemies. Shouldn’t that be the job of the chaplains, who are supposed to be nurturers of the souls of those soldiers who are in their care?

Evidence suggests that military chaplains avoid counseling soldiers about Jesus’ Golden Rule, his clear command to love their enemies or the ethics of the Sermon on the Mount. I’m sure that there would be consequences for a chaplain if one was discovered doing that.

Military chaplains are part of the apparatus of war that pays very little attention to any of the Ten Commandments, especially the ones that say: “thou shalt not kill” or “thou shalt not covet thy neighbor’s oil.”

In their defense, military chaplains, in their seminary training and, likely even in their Sunday School upbringing, may have never heard about the profoundly important gospel truths about non-domination, non-retaliation and the unconditional love of friend and enemy.

A couple of these theological blind spots are illustrated at the end of Joyeux Noel in a powerful scene depicting a confrontation between the Christ-like, antiwar Scottish chaplain and his pro-war bishop just as the humble chaplain was administering “last rites” to a dying soldier. The bishop had come to chastise the chaplain and relieve him of his duties because of his “treasonous and shameful” behavior on the battlefield (ie, being merciful to and fraternizing with the enemy).

The authoritarian bishop refused to listen when the chaplain proclaimed that he had just performed “the most important mass of my life” and that he wished to stay with his men, most of whom were losing their Christian faith. The bishop angrily denied the chaplain’s request and sent him home.

The bishop then delivered a rousing pro-war sermon to some fresh troops that had been brought in to replace the ones who were now refusing to kill anymore. The words of the sermon were chosen by the film-writers directly from a homily that had been delivered by an Anglican bishop in England later in the war. The subtle response of the chaplain to his sacking was very well portrayed by the filmmakers.

Some of the lessons of the story of the Christmas Truce are illustrated in John McCutcheon’s important song, “Christmas in the Trenches.” Here are the lyric. Pay close attention to the last line:

Christmas in the Trenches
By John McCutcheon

Oh my name is Francis Tolliver, I come from Liverpool
Two years ago the war was waiting for me after school
From Belgium and to Flanders, Germany to here
I fought for King and country I love dear

I was lying with my mess-mates on the cold and rocky ground
When across the lines of battle came a most peculiar sound
Says I now listen up me boys, each soldier strained to hear
As one young German voice sang out so clear

He’s singing bloody well you know, my partner says to me
Soon one by one each German voice joined in in harmony
The cannons rested silent and the gas clouds rolled no more
As Christmas brought us respite from the war

As soon as they were finished and a reverent pause was spent
God Rest Ye Merry Gentlemen struck up some lads from Kent
The next thing sang was Stille Nacht, tis ‘Silent Night’ says I
And in two tongues one song filled up that sky

Then one by one on either side, walked in to No Man’s Land
With neither gun nor bayonet, we met there hand to hand
We shared some secret brandy and we wished each other well
And in a flare lit football game we gave them hell

We traded chocolates, cigarettes and photographs from home
These sons and fathers far away from families of their own
Young Sanders played the squeeze box and they had a violin
This curious and unlikely band of men

Twas Christmas in the trenches and the frost so bitter hung
The frozen fields of France were warmed, the songs of peace were sung
For the walls they’d kept between us to exact the work of war
Had been crumbled and were gone forever more

Oh my name is Francis Tolliver, from Liverpool I dwell
Each Christmas comes since World War I have learned its lesson well
For the ones who call the shots won’t be among the dead and lame
And on each end of the rifle we’re the same holidays.