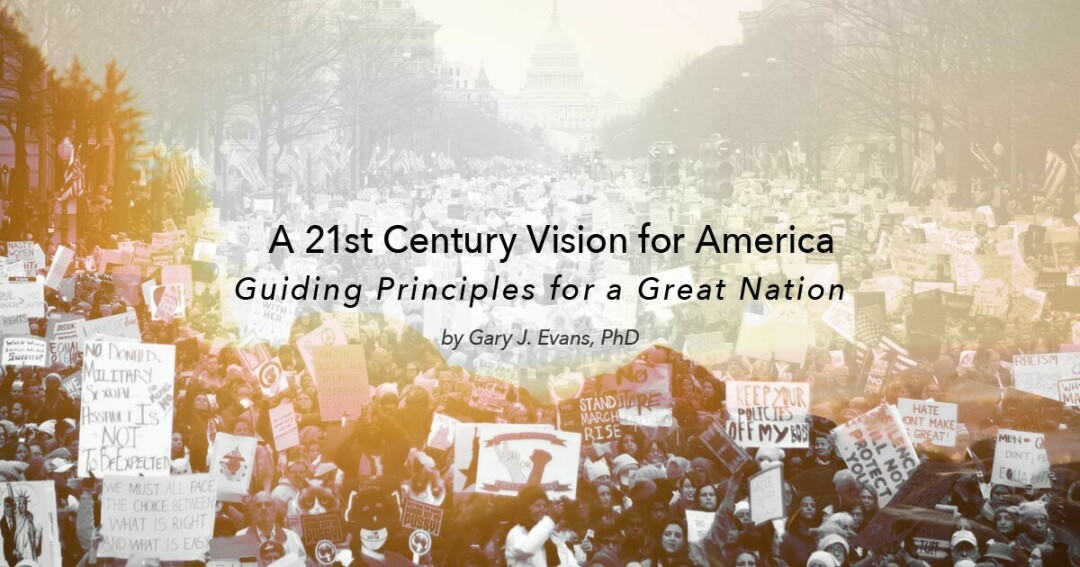 I recently stumbled onto a website that asked a number of “why not” questions.

"A 21st Century Vision for America: Guiding Principles for a Great Nation" is the work of Gary J. Evans, PhD and a business management consultant. It is a product of his “deep concern about the current state of American politics.”

Dr. Evans creates a practical, plain language vision of “our country as most Americans would want it to be.” He describes “an America that cares about people, protects our rights, provides opportunity for all, nurtures its lands and waterways, and serves as a good global citizen.” The America he envisions “serves as a beacon and model to the rest of the world, reminding everyone of what is possible when people of good will come together to do what is right.”

It should be noted that Dr. Evans is not a radical socialist. He is a capitalist business consultant. He advocates minimizing “interference in the free market.” But he also says America’s economy must work to the benefit of all and not just the corporate giants and the very wealthy.

Using brief statements and bullet points, Vision for America covers 25 important topics. Much of what it describes does not currently exist. Rather it creates a vision for what a better America would be and how it would work. He does this with statements describing a future America.

In his America everyone has affordable health care, free education, a decent job, and no one goes hungry or lacks shelter. There are no barriers to voting. Elections are fair, auditable, and trustworthy. Everyone has equal rights under the law, no one is harassed by police, and our prisons are much smaller. Taxes are fair, easy to file, and adequate to support necessary public services.

In his America, the U.S. cooperates, negotiates and works with international institutions to protect us rather than being the world’s policeman. “We use non-military means to create and maintain peace keeping the whole world safe.”

Regarding our divisive politics he says, “...all political parties [are] to serve American citizens, rather than special interests. When party and elected officials set aside hyper-partisan politics, everyone wins. We expect elected officials to respect and consider the views of opposing parties, and to operate in a manner consistent with good government practice.”

Dr. Evans has many more good aspirations for the country. I don’t agree with everything he says, but we all would be MUCH happier, healthier and better off if we implemented his vision.

Speaking of happiness, a recent study at Baylor University provides evidence to support a better vision for society. Research by Patrick Flavin, Ph.D., professor of political science, concluded, “Americans are happier in states where governments spend more on public goods, such as libraries, parks, highways, natural resources and police protection.“

Everyone needs and uses public goods. Public goods and services are typically not profitable and won’t be provided by private enterprise. But they re necessary and everyone benefits from them directly or indirectly.

For example, we invented the idea of national parks and forests. Yellowstone was created in 1872 and was the first national park in the world. Today it is a boon for the local economy and a destination for tourists from all over the world.

Public goods and services are essential to the well being of individuals and society.

As I have written about in the past, our best achievements as a nation – our true moments of greatness – were when we made choices that were good for people. When we invested in people and public goods we prospered economically and progressed as a civil society.

In the past, when the United Sates did what was right, it was admired and emulated. The ideals of the Declaration of Independence inspired many countries to overthrow monarchies in the early 1800s.

The Constitution became the model for similar documents around the world. The Bill of Rights was copied (and expanded upon) by other countries. We helped create the United Nations and the Declaration of Human Rights. America was once the destination for immigrants seeking opportunity and freedom. The Progressive Era and the New Deal were periods of reform based on these ideals

America was once the leader in environmental protection. America was great when it created Social Security, Medicare, and funded hospitals that served rural communities, minorities, and the poor. America was great when we stood for civil rights, equal opportunity, and welcomed “the huddled masses yearning to breath free...” There was a time when America was a beacon of hope despite our many failures to live up to these ideals.

President-elect Biden campaigned on a vision for rebuilding the country. He has detailed plans for taking action on many issues. Biden has an excellent, science based plan to combat the pandemic. Other topics include healthcare, clean energy, creating jobs, climate change, ending gun and other violence, ending the wars (Google “Joe’s vision” to see them all). After you wade through the campaign rhetoric you will find many good proposals. Some undo the mistakes of the last four years, some return to policies of the past, and a few create new visions for the future.

Even under the best conditions campaign promises and party platforms seldom become reality. Everything Biden tries to do will be opposed and obstructed by the Republicans. The corporate lobbyists will riddle it with loopholes. But the country will be MUCH better off if Biden can implement even some of these plans.

President Biden will need help to implement his vision. He will also need public pressure ensure his vision is not forgotten after the election. He will need pressure to ask “why not” and to dream big.