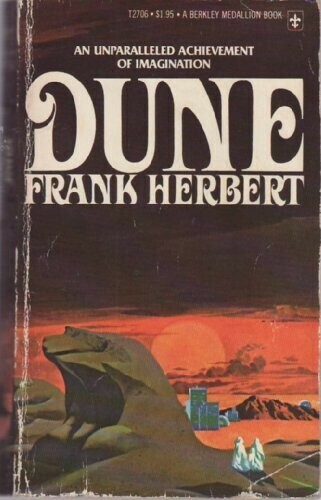 This is a classic of science fiction which I read about half a century ago, so you may ask why I should be talking about it now. The reason is that I have just been made aware that a movie has been made which is awaiting the easing of the pandemic. Prominent actors include Josh Brolin and Jason Momoa in leading roles. The makers of this blockbuster movie assure everyone that this version will not confuse the critics the way the 1984 movie did, because it will be made in two parts. “Dune” has the potential to be another “Star Wars” franchise if the movie is done right. It is the first of a 6 book series.

The 1984 movie starred Kyle MacLachlan, an unknown at the time. Google says he is best known for his acting in “Twin Peaks,” a series that escaped me entirely, but he is now playing the eccentric mayor of Portland in Fred Armisen’s “Portlandia.”

I was surprised by the critics’ reactions, because I thought it was an excellent adaptation of the book. It didn’t confuse me, because I had read the book first. So this is my recommendation to you: Get the book — it’s still in print — and read it, if you intend to see this movie. There’s time now with the pandemic, and I assure you, you will enjoy the film much more for doing that. Despite the producers’ assurances,

“Dune” is a very complicated book, and it will be well worth the time. One of the problems with the 1984 movie was the number of words which need to be explained; many that are specific to Dune, but also many, like “jihad,” that are of Middle Eastern origin. A complete glossary can be found on the internet.

The story is set 8,000 years in the future, after humans have reclaimed the galaxy from an age of machines. Hoping to recover what they had lost in those years, men are trained in mathematics, producing mentats, human computers, who work with probabilities within their male order, the Bene Tieilaxu, while women are trained in the use of psychic abilities. It is a feudalistic society, ruled by an Emperor from the Earthlike planet Kaitain. Swordplay is de rigueur rather than light sabers, and court intrigue abounds. The Emperor has a feared group of elite warriors under his command known as the Sardauker, which are the most well-equipped and trained troops in the universe. His power is somewhat constrained by the Landsraad, the body of ruling families similar to a Parliament.

The House of Harkonnen rules on the industrial planet Giedi Prime. At its head is Baron Vladimir Harkonnen, a deformed and despotic sadist, aided by his two evil nephews, Glossu Rabban and Feyd-Rautha.

On the water world Caladan, the rulers are House Atreides, headed by the popular Duke Leto Atreides, his concubine Lady Jessica, and their young son Paul. Lady Jessica is Leto’s mate, but he can’t marry her because, being in this feudalistic society, he has to be free to marry someone for political alliances.

Jessica is also a member of the Bene Gesserit, a sisterhood which has been conducting a breeding program for centuries, seeking to produce a superhuman Kwisatz Hadarach. They apparently have the ability to control the sex of their offspring, because Jessica was ordered to have a girl, but instead had Paul, because Leto wanted a son and heir. He is still a part of the breeding program, so the Bene Gesserit retain an interest in his development. There are religious overtones to this institution, as the senior members are referred to as reverend mothers.

The Atreides have developed a sonic weapon called a “weirding module,”which is their secret weapon. Paul is adept in its use.

The other members of the Atreides household are Duncan Idaho, Leto’s right-hand man and Swordmaster, Thufir Hawat, a mentat, and Gurney Halleck, Paul’s tutor and mentor. All of these people play important parts in the subsequent story.

The most important substance in the universe is the spice melange, which is only produced on Dune, otherwise known as the planet Arrakis. Melange is addictive, and is said to extend life and enhance psychic powers, particularly those that allow people to see into the future. Users of melange are characterized by having luminous blue eyes. It is most importantly used by the “Navigators” employed by the Galactic Spacing Guild. These “Navigators” can fold space/time, and bring spaceships between worlds safely and instantaneously. They are prescient from their consumption of melange, and a power in the universe, because they control all space travel, and so the distribution of melange.

In the 1984 movie, a Spacing Guild Navigator is portrayed having an audience with the Emperor. He appears to be an alien, immersed in a tank. One source from the internet says the Navigators are modified humans, another calls them aliens, so this issue remains to be clarified.

The Emperor gives control of Arrakis, and therefore the production of melange, to the Atreides, and Leto realized that he will have to move there in order to do that. He contacts Dr. Kynes, a spice mining leader who has a native wife and daughter and is known to them as Liet. Mining of the melange is conducted using giant “crawler” ships that can move from place to place. They are always in danger of being attacked by the giant sand worms that inhabit the planet. The sand worms are huge, and resemble the desert monster that swallows Jabba the Hutt in “Star Wars.”*

The last group of people are the Fremen, the “native” people of Arrakis. They are humans who have adapted to the harsh desert environment after centuries of occupation. The planet has no rainfall, and is endless sand with large rock enclaves called seiches. The Fremen wear stillsuits, which maximize the preservation of water. Spitting or crying is considered a sacrifice, because they waste moisture. The human body is 90 percent water, so the dead are rendered to recover that water.

The Fremen have a Bene Gesserit reverend mother, and a prophecy anticipating the arrival of the Kwisatz Hadarach, which says that there will come a man who will be “The Chosen One,” their messiah, who will free them from foreign rule.

Gholas are important later in the Dune story, so I’m not sure if any will appear in the first movie. Gholas are produced by the Bene Tieilaxu in their Axioti tanks. Similar to clones, except that clones do not have memories of a former life; gholas can be regrown from a single cell, and later have their life memories implanted, essentially restoring the dead to life again.

Herbert’s concerns about ecology in the present day world are the major influence for this book. Melange is a stand-in for oil, as the critical resource. At the time this book was written, the government was trying to stop sand dunes from encroaching on highways on the Oregon coast, and deserts around the world were expanding because of human activity.. Secondly, he warns of the dangers of following a charismatic leader. Dr. Kynes warns the Fremen: “No more terrible disaster could befall your people than for them to fall into the hands of a Hero.” Finally, he was concerned about religions which insist that they have all the answers. The Bene Gesserit claim they are not a religion, but their practices include beliefs and rituals taken from several very different religions.

* Yes, Star Wars fans, it was actually Boba Fett who got swallowed.