Not your typical holiday movies

Can’t watch Scrooge or It’s A Wonderful Life again this season? There are alternatives 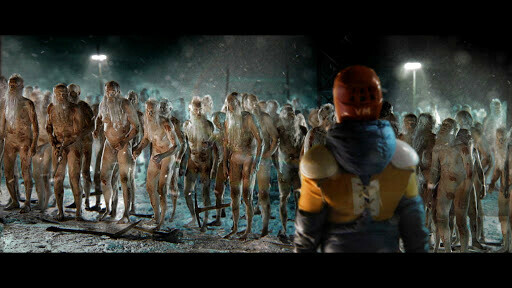 I’ve got nothing against Frank Capra’s 1946 holiday fantasy film. I’m sure it brought tears to my ears the first few dozen times I saw it. And as a fan of Dickens, I love his holiday redemption tale, but I do not need to see any of the many, many filmed versions, and that includes the nostalgia value of the animated version starring Mr. Magoo that I grew up on (I can’t imagine the networks are still showing that one).

If, like me, you grew weary in the last century of Ralphie’s incessant effort to shoot his eye out in the leg lamp movie but still like to get in the holiday spirit with a movie or two, the world of streaming offers a host of holiday-themed movies that should satisfy.

Let’s take a look at three very different genre pictures with the holidays at their core, beginning with a 2010 offering from Finland called Rare Exports: A Christmas Tale.

This wonderfully creepy movie could easily be classified as fantasy, horror or sci-fi.

Young Pietari lives in a stark, womanless landscape, the son of a reindeer hunter. He and his father live in eastern Finalnd, near the Russian border. 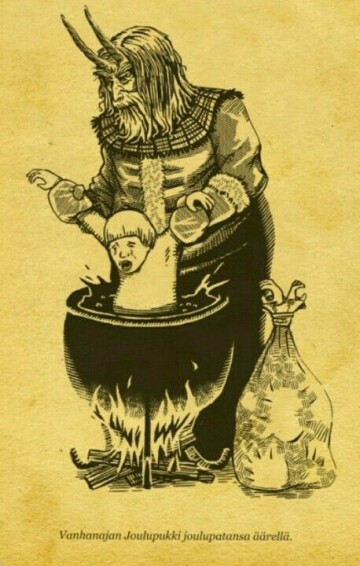 Pietari shows this image to his friend Jusso while explaining the history of evil Santa.

The story begins 24 days before Christmas, as Pietari and his slightly older friend Jusso have cut through a fence around a mountain that an American company has been drilling. The two boys hear the mining company CEO tell his assembled crew that the ultimate goal is to rob the grave of whatever is buried in a block of ice within the mountain.

Pietari, a student of the old myths, knows what they have found. He believes the company has discovered the ancient evil Santa that was frozen in ice and buried under the mountain by the indigenous Sami people.

He tries to explain to Jusso: “The real Santa was totally different. The Coca-cola Santa is just a hoax ... He tears naughty kids to pieces.”

When Pietari and Jusso find slaughtered the precious reindeer herd their fathers were going to round up,
it confirms Pietari’s suspicions that evil Santa has been unleashed on the world. When his friends start disappearing, Pietari sets in motion a scheme that not only stops the evil Santa from pillaging but creates a business opportunity for his father and his colleagues to recoup the $85,000 they lost in the slaughtered reindeer herd, but I don’t want to give the titular kicker away.

Despite seeing much of this story through the eyes of a child, it is not a kid’s movie – too many naked bad Santas and slaughtered reindeer for that – but for those who enjoy a very different take on this most sentimental of holidays, this movie is for you. 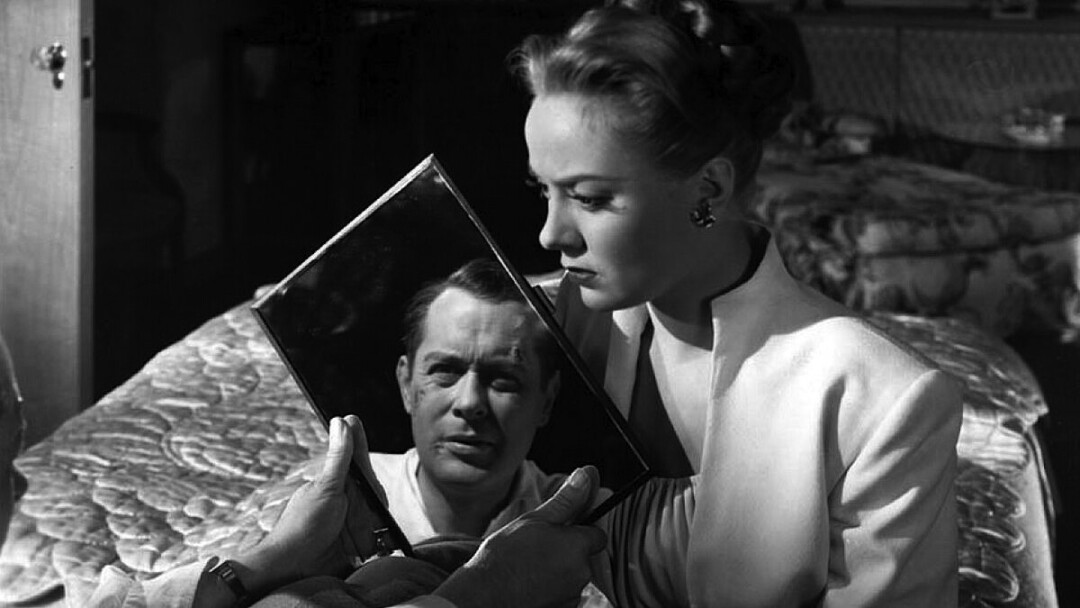 I’ve long been a fan of film noir for its chiarascuro ethos in cinematography and storytelling, and because it is a true American genre. Before streaming made films so readily available to fanatics, I kept a list of film noirs that I wanted to see, and one of those was the 1947 film adaptation of Raymond Chandler’s convoluted 1943 novel The Lady in the Lake, featuring his hard-bitten PI Phillip Marlowe. At the time I was trying to see it, I did not know it has a Christmas theme.

What I did know is that an unusual device was used in its making. The movie stars and is directed by Robert Motgomery (father of Bewitched star Elizabeth Motgomery). It was the star’s last of 18 movies for MGM.

The conceit in this telling of the story is that we see everything in the movie through Marlowe’s eyes. We do not see him unless he is talking directly to the camera in character, as he does to introduce the film, or if he looks into a mirror.

That alone made me want to see this, and then I finally found a DVD copy in the 1990s and was happy to add it to my list of alternative holiday movies as well.

The movie opens with a choral singing of “Jingle Bells” and other familiar Christmas tunes, just to put the audience in the right mood for this story of murder and deceit.

As the choral sings, a series of Christmas cards are lifted to finally reveal a gun.

The femme fatale in this case is played by Audrey Trotter, a pleasing and familiar face in the film noir genre. She is editor of a publishing house that has decided to publish a piece of crime fiction (“If I Should Die Before I Live”) Marlowe has written in an effort to find an easier and more lucrative career than private investigator.

But it turns out she cares less about the Marlowe’s short story and more about involving Marlowe in finding her boss’s missing wife. And thus we are off on wild goose chases, fists in the face and dealing with corrupt cops.

In 1945, Chandler had written a screenplay based on his own novel for MGM, but Montgomery didn’t use it.

In fact, the original story takes place in summer. Why did Montgomery frame it as a holiday tale?
Well, the world of film noir is a seedy one, and juxtaposing it against the time of light and hope and whatever else the holidays symbolize for individuals makes for a visceral experience. Forty years later scriptwriter Jeb Stuart and director John McTiernan found the formula effective for Die Hard. 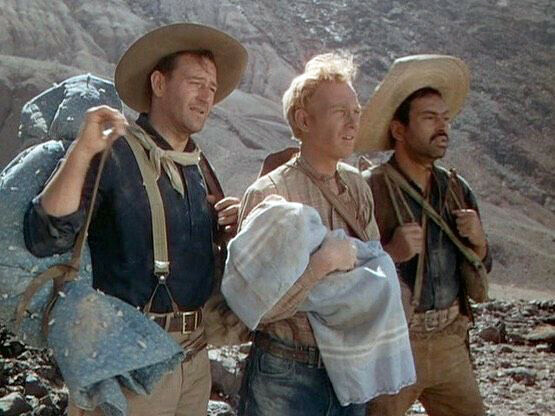 That other great American genre – the Western – also has a great holiday representation in John Ford’s 1948 3 Godfathers.

This was the fifth film made from the 1913 novelette by Peter B. Kyne, and the second time it was shot by Ford. His first version was a silent made in 1919 and called Marked Men. The first version was shot in 1916. It was remade again in 1930 by William Wyler, when it was called Hell’s Heroes, and again in 1936 as 3 Godfathers.

Ford dedicates his 1948 version to the recently deceased actor Harry Carey, who starred in Ford’s 1919 version of the movie. For this new version, Ford cast Carey’s son, Harry Carey Jr., as one of the 3 Godfathers, along with John Wayne and Pedro Armendariz. This trio is a Western version of the three wise men.

They rob a bank in Welcome, Arizona,lose the money in the escape from town, and take to the desert to escape the posse led by Sheriff Perley “Buck” Sweet (one of the best roles ever for Ford stalwart Ward Bond).

The 1936 version starring Chester Morris in the Wayne role is tougher and less sentimental than Ford’s version, so also well worth tracking down.

All of the above movies are available for streaming on Amazon Prime.

And just in case three is not enough, here are a few more oddball holiday movies:

Black Christmas (1974): Nine years before Bob Clark made the iconic A Christmas Story, he made this sorority sister Xmas slasher that was reportedly Elvis’ favorite movie, period.

The Man Who Came to Dinner (1942): The great cast of characters in this dazzling holiday comedy includes Monty Wooley as the titular character, Bette Davis in one of her most endearing roles, Ann Sheridan, Billie Burke and Jimmy Durante.

The Thin Man (1934): Dashiell Hammett’s novel launched a movie franchise starring William Powell and Myrna Loy as the hard-drinking and wisecracking husband-wife detective team, Nick and Nora Charles (their humorous banter is said to be based on the real-life conversations between Hammett and Lillian Hellman). Time has been very kind to this film. It still bristles with wit and that it takes place during the holidays is an added bonus.

We’re No Angels (1955): Humphrey Bogart, Aldo Ray and Peter Ustinov star as prison escapees who decide to help a struggling family after being invited to share their Christmas dinner. It was directed by Michael Curtiz, who previously directed Bogart in Casablanca. (Skip the 1989 version starring Robert DeNio and Sean Penn).

The Apartment (1960): Have to include something from the great Billy Wilder, and the holiday bacchanal that sets the scene here for sad sack Jack Lemmon and just sad Shirley McClaine makes this one fit nicely into the pack of obscure holiday films.