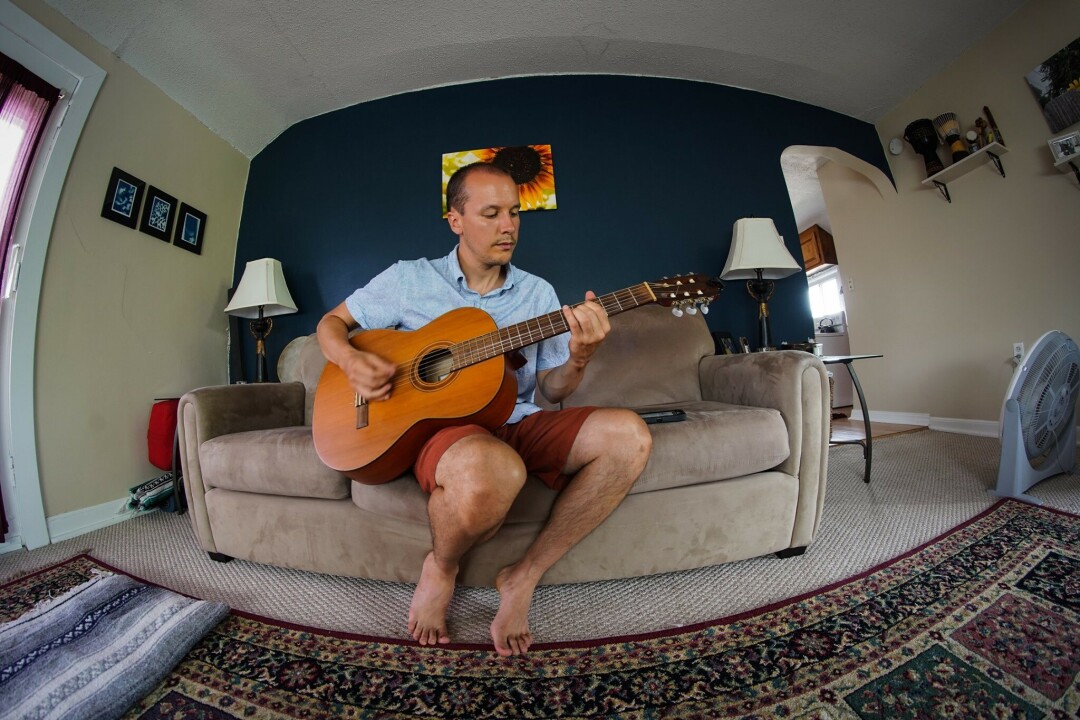 This is a COVID era release, recorded in a home studio with one guy playing all the instruments. Coffman was previously (just last week, it seems) the lead singer-songwriter of The Cuckoo Bees, a trio that in 2018 released its first and likely only album, “Weeping Willow.”

He’s gone solo, not just because of COVID but “due to life events and new career paths,” he told the Reader by text message. (They actually broke up in 2019. No one told me!) He references their brief legacy in the song “Marigolds on Monday” with the line, “I was once a cuckoo bee.”

Four of the eight tracks are new and four are remakes of songs from “Weeping Willow.” “I wanted to redo a few songs from the Bees album and do them as simpler arrangements,” he wrote. “I think also because it wasn’t long after we released the Bees album that we broke up and so I didn’t want that all to be for nothing, and maybe I could breathe new life into some of them. Also, I wrote them and there’s no rules. Haha.”

The first haha is the album cover, which shows a naked Coffman (side butt shot) with his head in the kitchen sink. It’s not clear if he’s throwing up or washing his hair, though the first option gives the album title a new meaning. But the image has no implication other than, as he explained during his livestream album release show Nov. 30, his photographer/girlfriend dared him to put it on the cover, “so I had to.”

There’s nothing vomitable in the music, which, like the Cuckoo Bees, is pleasant and sunny, marked by Coffman’s gee-golly-whiz voice. It’s also damnably intelligent, even magical, with an undercurrent interweaving dark and light. The lyrics are inventive and poetic, sometimes in a Dylanesque (Bob) way.

The title cut, written for a friend’s wedding, starts out as a simple, 1950s-style piece, slowly paced like Elvis’ “Heartbreak Hotel.” Coffman sings in a deliberate, unhurried manner, “Wherever you’re going … can … I … go … too.” It builds as the bass, drums and overdubbed vocals join in and turns into a foot-stomping singalong. (If Coffman ever achieves Justin Bieber-level success, this number will have the girls wildly screaming.) The video with stop-motion construction paper cutouts (made by Alyssa Johnson of Blind Spot Creatives) is one of the sweetest things you’ll ever see.

“Tango Til They’re Sore” is a Tom Waits cover, but it sounds very much like a Cuckoo Bees song, a vaudeville jaunt like the Bees’ “No Sad Song” and “Humblin’ Cold.” No surprise here, since Waits was a major influence on the Bees.

“Mother Earth” urges us to burn our money, give up our cell phones and return to nature, though I doubt the author himself has gone that far. It’s also curious that a song about Mother Earth is electric blues rock, but it’s catchy.

“Marigolds on Monday” is an autobiographical song, a tribute both to his youth (“Once I was an extraterrestrial being, I was nine years old”) and his grandparents. (“Grandpa was a worker bee, tougher than the sun.”) There’s some startling imagery, such as his grandfather on his deathbed pointing out the window. (True story.) The song goes through four movements, starting out floaty and amorphous and ending as soaring, funky gospel. It’s pretty much a masterpiece, the best reason to buy this album.

The next four songs are the remakes from the Cuckoo Bees album, for reasons best known to the artist. (Are self-remakes becoming a thing? The last album I reviewed, by The Dark Underbelly, also did this.) Do the songs gain anything by not having Matt Mobley’s upright bass and Mikayla Haynes’ vocals, by jettisoning the clarinet from “I’ve Been Thinking” or the lush orchestration from ”Weeping Willow”? That’s a judgement call. The willow song, also a tribute to his grandfather, packs an emotional punch in either version when he’s merely singing “ooooh.” The Cuckoo Bees album is still out there, including on Amazon Music Unlimited, so you can check the originals for comparison.

I’m completely sold on the new version of “Midnight Calling,” which is unexpected since it was my favorite Cuckoo Bees song and I didn’t think it could be improved. It’s not an improvement so much as a different but equally fine version, kind of like James T. Kirk versus Jean-Luc Picard. Whatever type of guitar he’s using, or whatever he’s done to enhance it, it has a lovely, bell-like resonance.

One thing he has not jettisoned from his Cuckoo Bees days is the xylophone, which I found to be an irritant on that album, but he brings it back here for several songs. So one way or another, the xylophone is integral to the Cory Coffman experience. I’ll put up with visions of dancing skeletons just to hear the rest.