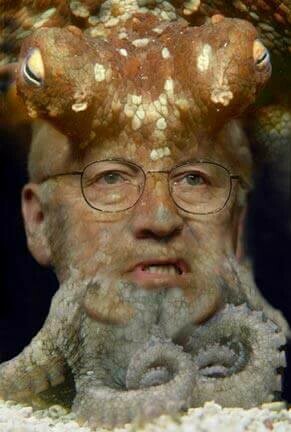 I don’t know if Charlie Manson ever killed anyone himself, but he masterminded the deaths of several people and served a life sentence for it. Dick Cheney had help, but there is no question that he was the mastermind behind the Iraq War, in which over 4,000 American military lost their lives and many more were crippled. Figures are disputed for Iraqi loss of life, but estimates vary from 100,000 to over a million. For this, Cheney’s old company Haliburton got a no-bid contract and first dibs on Iraqi oil, making $39.5 billion from the deal.

Cheney received lots of opportunities from the media to repeat his lies about the reason for the war. Then he became the first man in history to become heartless, both literally and figuratively, having brought back torture for prisoners of war and with his heart replaced by a pump. Bush, who seemed to be taking his orders from Cheney, suddenly balked at giving a full pardon for Scooter Libby, who had thrown himself under the bus for Cheney.

From the hole in which he’d decided to hunker
Dick Cheney crept out to assess his new place.
He sighed as he slithered back into his bunker,
“Not even a guy I could shoot in the face.
No war with Iran, no pardon for Scooter,
All of the chickenhawks growing neurotic
No prisoners to torture, no captives to neuter.”
No fun for a paranoid heartless psychotic.

Cheney did shoot a man in the face, and then proved that, even though they always say, “No man is above the law,” there are some that apparently are, as we have seen again with Donald Trump. All that is required is to know the right people.

There were still sensible Republicans when Nixon and Agnew both had to resign for their “ethical lapses.” There might have been decent GOP candidates to replace them, but Democrats insisted on having someone who would be unelectable, so Gerald Ford, whom LBJ described as playing too much football without a helmet, got the nod. Ford lived up to their expectations, giving Nixon a full pardon and then losing to a peanut farmer. Jimmy Carter proved to be too nice for the job and Ronald Reagan, a man no one has ever claimed was a good Governor of California, won in a landslide, to become our first acting president.

Weficit, deficit
Reagan the President
Led all the working class
Down in a ditch.
Signed off on policies
Mephistophelian
Took from the destitute
Gave to the rich.

And from this election onward, I have developed my Theory of Celebrity Elections. My theory is that in any American election, the winner will be whichever candidate is the most well-known celebrity. Had the Democrats been able to convince Paul Newman to run, he would have beaten Reagan. Newman was a liberal. but he was also an A-list actor, while Reagan was at best B-list. Sonny Bono not only won an election but when he died, his wife, whose only qualification was that she’d been married to Sonny Bono, won his seat. Sonny would never have been elected in the first place if Cher had run against him.

George H. W. Bush, whom Ann Richards said was “born with a silver foot in his mouth,” was next in line, and people knew his name as a VP. He also lived up to his reputation by promising no new taxes, but seeing that Reagan left the economy in a shambles, he couldn’t live up to his word and was defeated by Bill Clinton. Clinton was a policy wonk, but his most feared weapon was his wife Hillary, who disturbed conservatives by saying that she wouldn’t stay in the kitchen like she was supposed to. They got Ken Starr to look for ethical lapses by the Clintons. He didn’t find any, but he did find moral lapses by the president, which he liked even better. Following that debacle, conservatives pilloried Hillary for honoring her wedding vows.

Higgeldy, piggledy
Yale University
Gave a diploma to
George W. Bush.
Moved by his impulse for
conviviality
Needing his Daddy to
Give him a push.

The next election pitted Al Gore, former VP, against George Bush, president’s son and almost namesake, so their celebrity status was nearly equal. This was borne out in the election, in which Bush won the popularity vote in the Supreme Court. He demonstrated his incompetence in his first term, so he was naturally given another, because by this time, nearly everyone recognized his name. Like Reagan, he left the economy wrecked for the Democrats to fix.

Obama was a Black man, which people immediately recognized as something unique in American politics and therefore the clear choice. Unlike his predecessor and successor, we did not have to cringe when he went overseas, because he kept his hands off the German Prime Minister, and didn’t push people out of the way for group photos. Another odd fact about Obama was that, unlike the Nixon, Reagan, Bush and now Trump eras, none of the officials in his administration ever went to jail.

My celebrity scale for political candidates in general is: show-biz personalities, professional athletes, political families and then famous names for whatever reason. Supermodels could be formidable if only they would admit to being over 35. Of course, A-list movie stars top the list, especially if they have just starred in a popular movie. Rock stars with TV shows outrank rock stars who just do talk shows. In the proper setting and with less well-known people to run against, Ted Bundy could be our President now. There was a long list of Republican candidates in 2016, but Trump was a shoo-in as a TV celebrity. Pat Sajak might have beaten him had he run, depending on whether more primary voters watched “Wheel of Fortune” or “The Apprentice.”

The Democrats had a similar problem in 2020 with a glut of candidates and no familiar family names. Unfortunately, Bernie Sanders chose to run again and he had a familiar name, but also had the term “socialist” attached to him, which has been an anathema to people who, starting with Henry Wallace, had been told that socialism is just communism light. Joe Biden was then the clear winner, as a former VP outranks a socialist senator on the celebrity scale. In the national election, the celebrity scale appeared to break down, since a show-biz personality outranks a VP, But in this case, Trump’s handling of the pandemic convinced enough people that maybe incompetence is not a particularly good attribute to have in an emergency. Still, the TV persona was difficult to overcome.

OUR WITCH DOCTOR IN CHIEF
Dumpty suggests disinfectant injections
To save us from COVID’s pernicious infections,
Or a frontal attack to defeat it outright
By blasting our lungs with salubrious light.
A blithering idiot, gone round the bend:
When in the world will this lunacy end?
(From “Trumpty Dumpty Wanted a Crown” by John Lithgow)

It should be noted that the celebrity status of professional athletes depends on the sport, where the athlete played, and in the case of superstars, how their names have remained in the public eye after they retire. A Red Sox player will not get many votes out of New York, for instance, and vice versa. A golfer probably could do well nationally, whereas a team sport player will only do well regionally unless he has been retired long enough for fans of rival teams to get nostalgic.