The swinging door life of Sagittarius 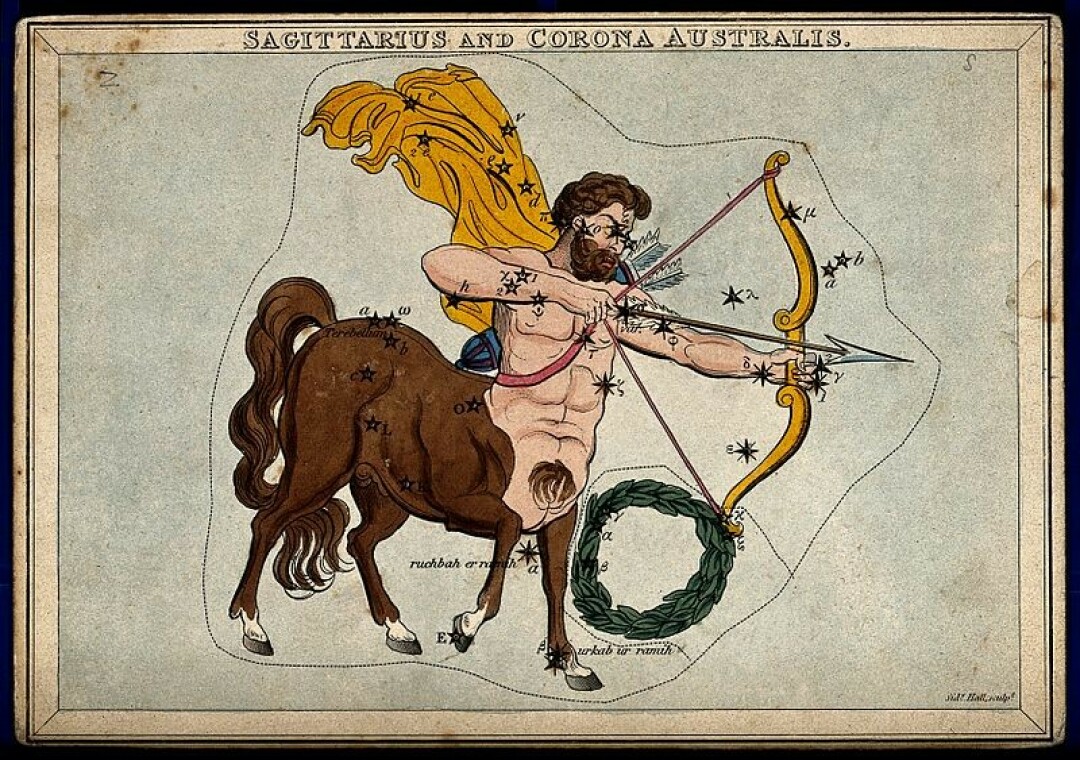 ELEMENT: Fire. Sagittarius is forever glowing like a bunch of fireplace embers. They seem comforting, but you better stand back, or they’ll scorch your ass.
QUALITY: Mutable. So much so, that they don’t even know who they are. Their life is a swinging door (to the bedroom).
SYMBOL: The Archer. Sagittarius is the hunter of the zodiac. Bargain hunter, and sexual predator.
RULER: Jupiter. They are larger than life. Brutally frank, and chronically making you wince.
FAVORITE PASTIME: Opening mouth and sticking foot in. Speaking without thinking.
ROLE MODEL: Sheldon Cooper
KEY PHRASE: “Bazinga!”
BODY PART: Lower back, which is constantly aching from being such a pain in the ass.
POSITIVE QUALITIES: Adventurous, philosophical, confident, wise, generous, expansive, optimistic.
NEGATIVE QUALITIES: Tactless, restless, unreliable, self-righteous, boastful, moralistic, insensitive.

This sign of the zodiac is not stable. Not even close. They subscribe to the “Grass is always greener on the other side” credo, so they are constantly “scoping” out new prospects to swoop in on.

They are into short- term sensation, and not long-term commitment. They have a constant need for mental and physical stimulation, and while their higher mind searches for the meaning of life (Stephen Hawking), their other half represents their instincts and passion (Lindsay Lohan)…*burp*

The wild nature of Sagittarius tends to express itself in their love of freedom and their refusal to conform to day-to-day social conventions. They are the ones that streak the family reunion party….(hysterical, right?)

Sagittarius lives in the ninth house of Philosophy, Adventure and Long-Distance Travel.
In astrological myth, this Mutable Fire sign is described as a gregarious, honest, fun-lover who was born with a philosophical outlook and a yen to wander.

The rotten truth is this tactless, vociferous bore harrumphs through the world with one foot caught in a bucket and the other lodged firmly between their overdeveloped jaws. Both sexes think they know everything and spend their time trying to educate the rest of us.

They don’t do subtle. The Archers have outrageous horse laughs, and a court jester smile. All you have to do is poke them with a stick, and you will release a ton of repressed rage.

All of that suppressed fury is why Sagittarius makes the world’s best serial killer. Lucky for you, the “Sag” blows their top infrequently, and instead of physical violence they will just put their fist through your closet wall…(nice)….and then shout vulgar swear words about your family….(equally nice).

This is the most volatile of the Fire signs. The act of arriving is not the point; the adventure, the unexplored mystery, and the idea of the unobtainable goal is what really fires their imagination.
Sagittarians are by nature highly intuitive, and they have a great gift for spotting new opportunities wherever they arise. They are impulsive and bold, and they like to try their luck, even if it might seem a little risky. Boredom is the great enemy of the Sagittarian, and they can become very disruptive if they feel trapped or fenced into a situation. Routine will kill them dead.

“My divorce came as a complete surprise to me. That will happen when you haven’t been home in 18 years.” Lee Trevino (Sagittarian)

Before you decide that you have found your soul mate in a male Sagittarian, understand that he is much like his mythological symbol, the Centaur. He will spend most of his adult life in continual heat. Sure you fell for his adorable smile, and his ability to quote Lord of the Rings while simultaneously pulling your panties up out of your jeans – be wary!

As your partner he will of course be a great friend, but you won’t see him very often, unless it’s to shower and change his clothes….this is when you will feel as if you are still single.
He actually wants you to have a life separate from his, since that will allow him to hang out with his buddies and drink beer, and maybe take the waitress home. He might even follow his favorite band around the nation….shame on you for caring where he is!

He was born to be a bachelor, so he really doesn’t care about the stuff going on in your life….how you look, if your arm fell off….your weight ballooned up to 300 pounds….he’s fine with it. He is far too busy solving the world’s greenhouse gas problem.

“How can you talk if you haven’t got a brain?” asked Dorothy. “I don’t know. But some people without brains do an awful lot of talking, don’t they?” answered the Scarecrow.

Your Sagittarius girlfriend is the original squeaky clean stereotype. She believes in honesty, isn’t into pitying herself, and is genuinely friendly. She reads everything, and likes to travel. You might even start to picture your idyllic life with her….family get-togethers and big dinners with lots of laughter and fun…..but wait….

She will not show up, because there was a fundraiser for homeless squirrels. She is chronically late for EVERYTHING and tends to fall down…..a lot!

It’s the neverending need to be somewhere fast, that gets her into trouble. Most Sagittarian women are easily spotted by their arm cast or leg crutches.

If you ever inadvertently piss her off, she will spend the next half year entertaining friends and family with tales of your stupidity and shallowness. Everyone, of course, will be howling with laughter at your expense, and you will have learned another valuable lesson of the Sagittarian…public humiliation is her way of punishing you for being such a jerk.

The Sagittarian’s way of honesty is saying things like “For a fat person, you sure don’t sweat much.”
And talk about clumsy….more accident prone than any other sign. The Sag has a constantly bruised head and scabby knees. But that’s OK with them, since they would rather be crippled for life than do anything the easy way.

No matter how ridiculous the Sagittarian’s remarks may be, there’s usually not a shred of malice in his or her soul. Knowing this will help you not to throw a frying pan at their head. You will break down their exterior, if you are brave enough to call attention to their constant blunders….this will be easy as one occurs every 10 minutes or so. Since the Archers are very quick on the uptake, and hate to hurt anyone’s feelings, with some patience on your part and minor effort on theirs, you can probably stretch that timeframe to about an hour.

Lady Ocalat is a professional astrologist, reiki master, minister, paranormal investigator and tarot reader. She can be reached at 218-722-2240, or at Lady Ocalat’s Emporium in downtown Duluth. ladyocalat.com, ladyoparanormal.com