A football season to forget? 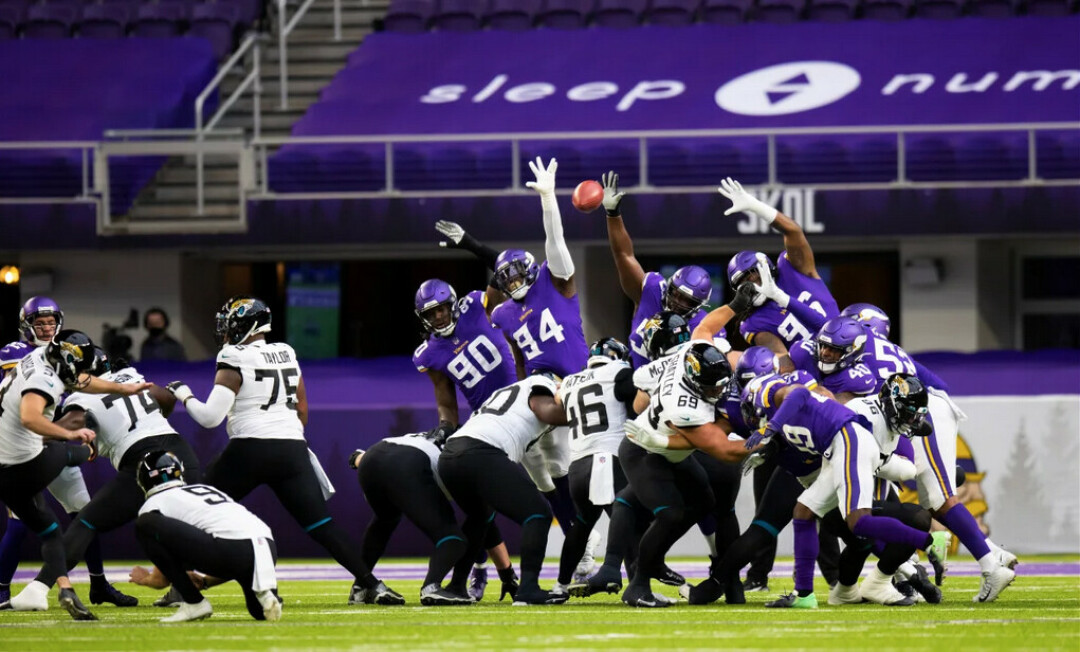 "In watching the Vikes and Jacksonville slog it out ... " (Photo: Vikings.com)

LARSMONT – With all of the various public health protocols in place, along with the requests to quarantine and social distance, I’m trying my best. I mean, I live kind of a quiet existence the way it is. So it hasn’t been a drastic change for me.

The one thing that has hit me the most is that I am not getting my daily nutritional requirement of Ice Hockey due to all of this. So I’ve been filling in with a bit more football than would usually be on my plate, which is fine.

I have long loved football, even if there are things about it that grind me. For starters, at this point, I likely lean more toward college football than to the NFL. I still have some issues with the way the league does business, and considering some of the political hills they choose to stand on, that is probably going to hold firm.

For the collegiate game, a couple of issues rankle me to this day, one of which is that the NCAA still has NOT put together what I consider to be a real playoff for what could be deemed, to be an honest, playoff-tried and actual D-1 National Champion.

I’ve heard the phrase used that the current format (computer devised basically) is the best thing they can come up with. That’s just so much nonsense I can’t begin even to apply verbiage to my response.

The current format cannot and never will accommodate a significant upset’s aura, factor in a critical injury, coaching blunder, home field, and so many other factors that a real tourney can.

Next up is that an annual survey of the top 25 rankings at the beginning, mid-point and end of every season will show pretty much the same teams year after year. There is a newcomer on rare occasions, but usually, the same powerful, well-coached and well-funded clubs are at the top of the heap, almost always.

Is this compelling to any non-die-hard fans of the game? Not in my book. But not wanting to penalize excellence, is there any way to achieve some parity here? That’s a pretty hard question. Where would you even begin to try to make the college game more competitive overall?

In this past weekend’s competition alone, nine FBS games were canceled due to COVID-19 out of 55 scheduled tilts, and of the games played, I counted 19 blowout games. That’s a bit short of half. It’s unacceptable.

Of the canceled games, the Gophers vs. Northwestern game was among them. With the Wildcats enjoying a strong showing so far and sporting a #14 national rank, the Gophers may have dodged another not-so-pretty loss.

On the other hand, young teams need game experience, and these situations will negatively impact the future of building programs.

It’s easy to see the dramatic effect the pandemic has on the season and likely will for the foreseeable future. And it’s a shame the country, via inaction, didn’t get on top of this and act prudently and forcefully at its first opportunity. Much grief could have been spared for citizens, businesses, and the sports world alike.

THE NFL HAS PLODDED forth with its season. There have been a few reschedules, but the league remains determined to get in all of its games before holding a reformatted playoff leading to the playing of Super Bowl LV.

Of my pro ball viewing, mostly centered around the Vikings, I have noted a voluminous number of what I refer to as “slop games.” I’m sure it’s unavoidable in this playing environment whereby your roster for a given game is wholly based upon the number of positive COVID tests that week or day. So, I understand, but I don’t automatically forgive.

In watching the Vikes and Jacksonville slog it out, one thing that stood out was the sheer number of what I was always taught were “concentration” type of penalties or gaffes on routine plays. They are just unacceptable at the pro level. They drive coaches nuts.

In examining the Viking’s schedule, there have been a solid three “slop” games (ATL, DAL and JAX), with the team returning a 1-2 record in such games. I’m not going to analyze the coulda-shoulda factor with this year’s edition of the group because there’s nothing to gain from it.

However, in a season with at least some indifferent expectations, due to several factors, it isn’t hard to say that the current 6-6 record of this club could be 9-3 or in that vicinity. But that’s why they play the games, they say.

At this point, the team is suddenly being discussed as a playoff club again. And based on this whacked-out season, it could happen. Of course, I wouldn’t get my hopes up for some run by the club. They don’t possess that type of roster depth.

To win one playoff tilt if they qualified, the team would have to conjure up a bit more “Minneapolis Magic.” That’s just the way it seems this year.

As far as eyeing up any playoff procrastinating, at least everyone else is up against the same quirks the Vikes are this year. At this point, the NFC’s power seems to be, in my order, NOL, NYG, GB, and, believe it or not, the Vikes.

That is all based on the last five games. SEA and the LAR were strong early and have cooled. No one else in the conference stands out.

Over in the AFC, there are a couple of what can solidly be referred to as “power teams.” PIT is undefeated, and KC is a healthy 11-1. BUF, MIA and CLE are all 4-1 in their L5. However, I do not feel that any of them make their way through to the title game.

Over here, it probably goes right through KC and then PIT. Time will tell. And I’m leaning to KC when it gets down to brass tacks.

Would a KC vs. NOL Super Bowl be a good matchup in that game? I think so, but it would depend on how good of shape NOL QB Drew Brees is in when he returns from injury. He is still out with a multitude of disorders, his ribs being the biggest challenge. Others are touting the Packers as a team that could get in.

I’ve seen them a few times. It’s possible; then again, I’m not sure. When you have Aaron Rodgers calling the signals, you are going to have some success. Can the rest of the club pull their weight? That’s the unknown factor.

THE NHL IS STILL IN talks to determine a beginning date for the its season. The hoped-for Jan. 1 start date seems to have evaporated, with a new projection of the 15th as the earliest the league could commence operations. Either way, let’s GO! I have seen a few college games, and I am ready for some pro action! PEACE