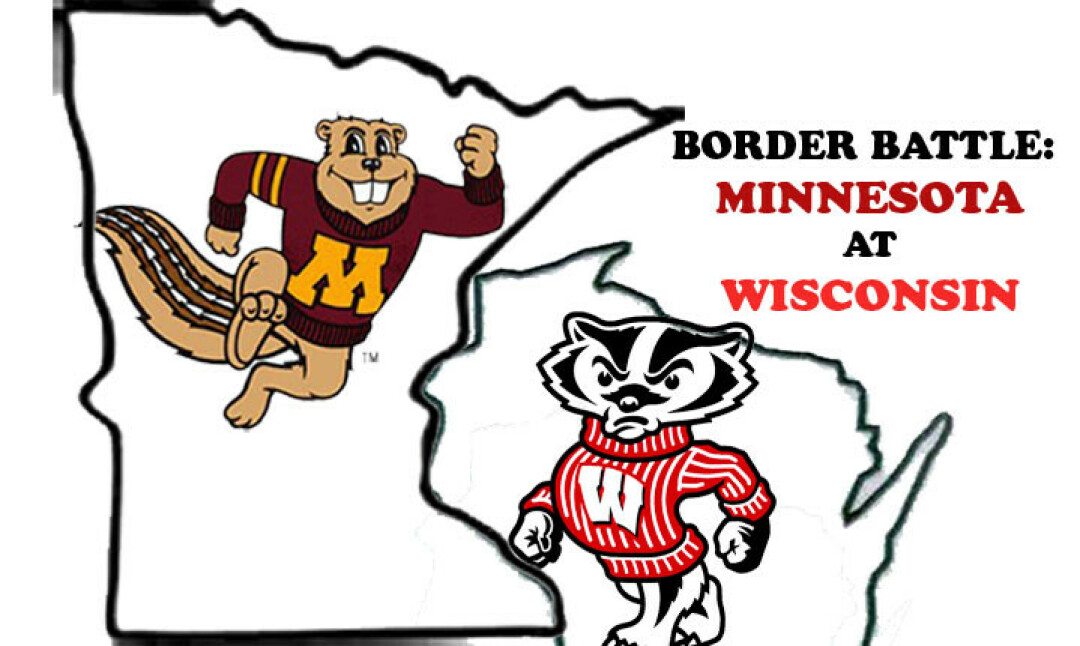 With multiple positive COVID-19 tests among both clubs, the BIG 10 and the schools stepped in and canceled the contest. At least 40 positive results emanated from the Gophers team. It has been reported that the school is working toward getting the team back into a negative testing stance so they can carry out the remainder of their schedule.

I can’t say with any honesty that the Gophers had a chance of besting another healthy edition of Badger football this year, but that’s how the pendulum has swung over the decades with this nationally storied rivalry.

The Gophers have a substantially different roster this year as opposed to last season and the season before when they last won against Wisconsin.

The two schools have met 129 times, with the Badgers getting the nod at this point with a 61-60-8 record. The Badgers have the longest win streak in the series at 14 games.

All in all, it has been a remarkable series and rivalry. It’s only a shame that it had to be shelved this season, even if I didn’t like the Maroon and Gold chances at a win.
* * *
THE NATIONAL HOCKEY LEAGUE continues forth in discussions with the NHLPA in an attempt to iron out the logistics involved to be able to have a 2021 regular season of competition.

With a beginning date of Jan. 1 in the works, time is growing short.

Oddly, some dialogue I have sifted through is in regards as to whether there will even be a season. That centers around the fact that the season will probably be played out before empty arenas. And that could whittle down league revenues from about $5 billion to a mere $1.5billion, leaving some owners to ponder what the point would be of having a season. I hope that isn’t what happens.

From my business perspective, it would be better to minimize losses by having a season and keep your product relevant, as opposed to maximizing them and not.

There are still other issues to resolve, but revenues and salaries will be the most prominent bones of contention. In favor of some intelligent dialogue, both sides understand all the variables quite well and are trying to understand the whole picture without just descending into bitter vitriol.

The two parties seem to have finally been able to do so after years of some painful labor and CBA negotiations. I credit Commissioner Gary Bettman and NHLPA Head Don Fehr for that. They have developed a cordial but still businesslike relationship that has benefitted both sides and their group’s images. This stance is finally positive.

* * *
IS IT TOO EARLY to predict what a Minnesota WILD roster might look like on opening night? I’ll answer my own question; yes, it probably is. However, it never hurts to think ahead, and that’s what I’ll try to do here.

Training camps could conceivably open up in two weeks, so we should be examining this. Most diehard fans are not unaware of the changes that have been made to the roster in the offseason. It’s definitely going to be somewhat of a different looking team this year. Here is what the current depth chart looks like, and you will see that there actually may not be any spots open for a new player here or there, but we’ll see:

Any possible roster expansion due to the pandemic situation hasn’t been settled as of yet. So I don’t know if there will be one or not, as in the recent playoffs. It would probably be prudent to plan for one.
This list does not include any prominent incoming rookies who undoubtedly will have an opportunity to grab a roster spot once camp begins. Center Marco Rossi comes to mind. But it isn’t a given that he would land a spot unless his camp performance dictates that he cannot be held back. But with the club in a semi-rebuild mode, it would be prudent to allow him to get some seasoning.

The Wild will not be Stanley Cup contenders this year, so let the kid build up his game. I’ve seen this team rush too many players through their development because of the big club’s roster deficiencies. It is time to end that practice if the team wishes to get serious. There is a right way to go about building a Champion and a wrong way. Let the kid learn how to be a pro in an unhurried environment.

So, with the names named, what would opening night look like? (barring injuries, etc.) I believe you will see Talbot and Big Al between the pipes. Your six D-men will be as listed; Suter, Spurge, Brodin, Dumba, Soucy, and Hunt. On the right side will be Fiala, Zucc’s, The Bugler, and Hartman. On the left will be Kaprizov, Parise, Greenie, and Foligno. I believe these spots are what will be. Now comes the challenging part, plugging in your Centers. Or, maybe it’s not. Remember, I think Rossi will have to come in and raise some eyebrows to make the club. Can he? I think it’s entirely possible due to his skill set, but it hinges on GM Bill Guerin’s vision for him. So who gets a coveted Center spot?

This is subject to change, of course, but; Johansson, Ekker, (I love this kid and his commitment to becoming a pro player, the RIGHT way) the newly acquired Nick Bonino, and I’ll go out on a limb here,  the last three choices here are Rask, Mayhew and Rossi. The indisputable truth here is that due to Rask’s contract, he will likely be the one staying over Mayhew or Rossi unless Guerin wants to bury Rasks’ deal in the minors, which hasn’t been in the Wild business playbook in my memory. In an additional downside, the contract has this season AND next left before it expires. What the team has received from this player has been a mixed bag. You can see the potential on some nights and not on others. He’s 27 now; he should be at his peak every night. I’m not too fond of it, but I’m going to have to go Rask here. Rats! PEACE