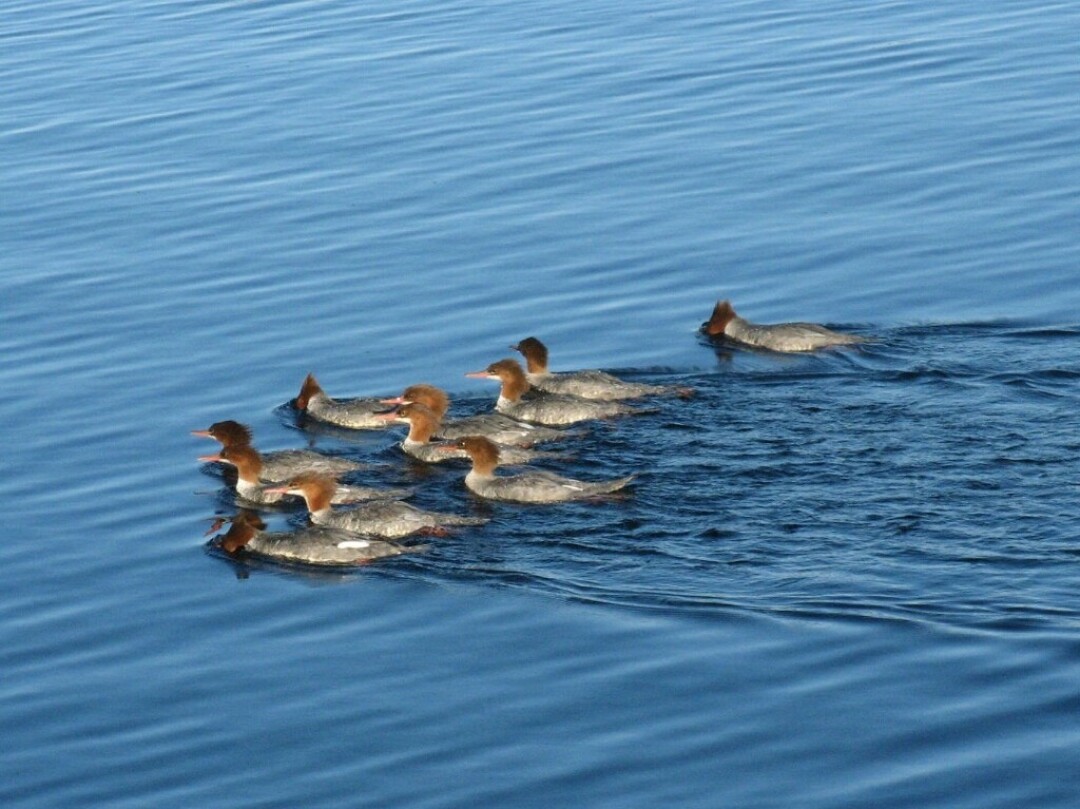 In gray afternoon light, with clouds hanging low and damp, and snow clinging to the lace of barren trees, little specks of slush began to splat on my windshield. I turned on the wipers at the same time I glanced at the car’s thermometer: 33 degrees. The road still looked wet, and I was glad that I’d timed my trip to arrive home before sunset.

Then a partially frozen lake loomed out of the gray, and I did a double take as dark shapes emerged from the gloom. A raft of waterfowl floated in the mist. The stark contrast of black-and-white on their feathers made my heart leap with the barely formed thought of “loon!”

It’s been less than a month since I spotted my final loon on Lake Namakagon – a brown-and-white juvenile gaining a little more strength before flying to the west coast of Florida – so how could I miss those Northwoods icons so much already?

My hope was fleeting, though. The only recently spotted loons in this area have been a solo Pacific loon, a single red-throated loon, and a few common loons, all up on Lake Superior.

Curiosity brewing, I found a driveway where I could safely turn around, got my camera out of the back seat, turned the radio down, and started the hazard lights blinking. Through the sleet, and through my zoom, I could see black heads and white bodies with black backs. Definitely not loons.

On my computer screen, the waterfowl gave up their mystery easily. Among the highly visible birds with striking contrast, gray individuals with brownish heads materialized in the fog. All of their beaks swooped out in a concave curve that tapered to straight, pointed tips and showed just a hint of reddish orange in the low light.

Have you figured it out yet?  They were common mergansers.

Common, yes, but also fascinating. Like so many birds, the breeding habitat of common mergansers extends across the lush summer of Canada and Alaska, and only just barely dips into Northern Minnesota and Wisconsin.

Even though we’re on their southern edge, they are easily spotted and fun to watch.

Most paddling trips in our region – whether on lakes or rivers – seem to turn up at least one family of mergansers. And by family I mean either a male-female pair before she’s laid eggs, or a mom and her dozen or more chicks after the father is long gone.

Male mergansers typically abandon the crew during incubation. Maybe they can’t take the stress of what happens when the chicks fledge: only a day or so after hatching high up in a tree cavity, the still-flightless chicks just flail their stubby, down-covered wings and jump for it.

Mother merganser ushers them all to the nearest lake, and the chicks immediately dive in and start fishing for breakfast.

In contrast, a dedicated pair of loon parents provides every single morsel of food to their chicks for the first few weeks, and patiently teaches their babes to hunt after that. Because of these time-consuming investments, loons rarely have more than two chicks.

Merganser chicks are much more self-reliant. The female provides protection and guidance, but because she doesn’t also have to provide calories, her brood can contain as many as 17 chicks.
O

ne photographer on Lake Bemidji in 2018 captured a photo of 76 merganser chicks with a single adult female. This wasn’t just one family, though, it was a group called a “crèche (if you say it, make it rhyme with the word mesh), basically a daycare for ducks from many broods who are dropped off into the care of an experienced matriarch.

In such a group, mergansers often dive in sync, and send the water roiling with their hunting.
I’ve spent many a Boundary Waters afternoon giggling as they pop back to the surface like adorable bobbers.

Aquatic insects are enough of a mouthful for the first two weeks of life, and then the chicks switch to catching fish, too.

Besides strong swimming muscles and webbed feet, mergansers rely on a serrated beak to help them catch slippery fish. This adaptation has earned them the nickname “sawbill.”

As you might guess from the timing of my sighting, mergansers are one of the last waterfowl to migrate in the fall.

Other ducks who are still here – in hot ponds, flowages, or other unique, continuously ice-free waterways – will probably stick it out for most of the winter.

Ryan Brady, a bird biologist for the Wisconsin DNR, told me that, “Usually the big rafts of them, especially when including a bunch of males, indicate the end of migration is near.”

Even though the mergansers and I share a love of Northwoods lakes and rivers, I can’t help thinking of two important differences between us.

First, I’m jealous that they get to travel together in a large group.

Second, they’re headed to warmer climes, and I’m fervently wishing that the lakes will soon be solid playgrounds, and the slush I keep seeing on my windshield will turn into many inches of fluffy, skiable snow.