‘A raucous bunch of Marines’ 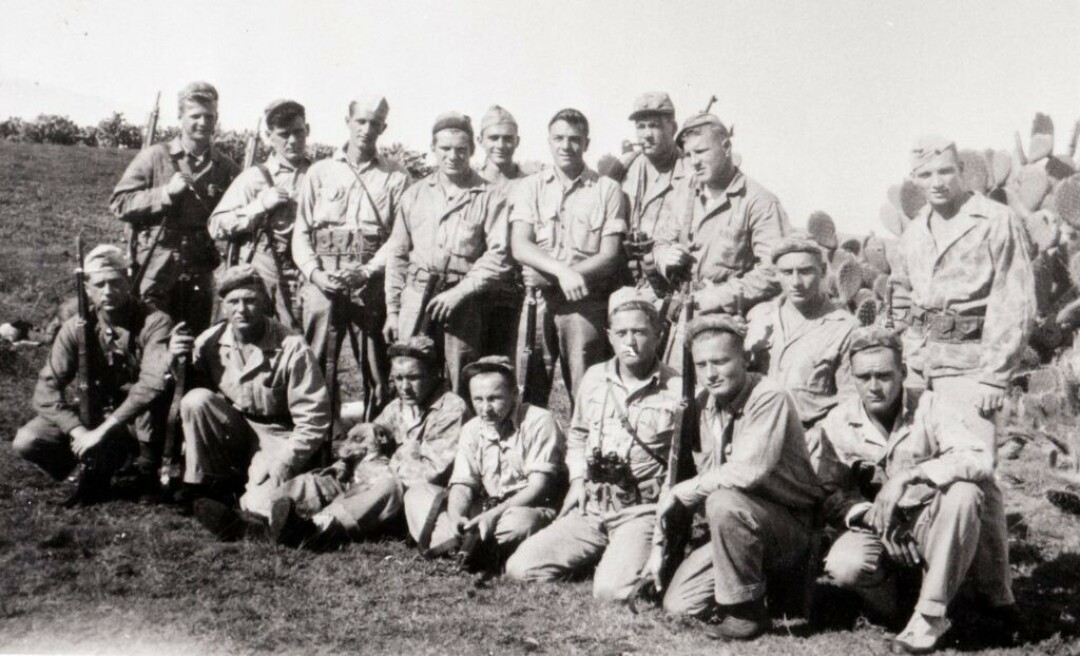 You only have to look at Sturgeon Bay newspaper archives of the 1960s to learn that Frank Tachovsky was a mover and shaker in the city.

He was on his second term as mayor when appointed to serve as the city’s postmaster in 1966, which forced him to give up his mayorship and his day job as a print salesman at the Door County Advocate newspaper. But he continued to be a participant in city affairs and a familiar face in the newspaper, whether it be as chair of the United Way Fund Drive or playing on a winning golf foursome.

Tachovsky held such roles in the community because he knew how to get things done. It was his specialty at home in Sturgeon Bay, just as it was when he commanded a group of roughneck Marines in a scout and sniper platoon in the Pacific theater during World War II, a unit that was proudly known as the 40 Thieves.

“Dad never talked about it so you never asked questions,” said Frank’s son, Joe, who was prompted to learn more about his father’s military service after his dad died on September 10, 2011, at the age of 96.
“It actually started at his memorial service when a gentleman got up to speak,” Joe Tachovsky said.

That gentleman was Sturgeon Bay native William Parsons, whose eulogy told of meeting Frank in 1955 while both were attending the University of Wisconsin-Madison. Despite Frank being an older, non-traditional student, 18-year-old Parsons and Tachovsky talked because both were from Sturgeon Bay.

Parsons, who was in Naval ROTC at the time, didn’t know much about the older man, but became curious one day when he saw a normally stoic Marine sergeant brighten and become animated in Frank’s presence. So Parsons asked the sergeant how he knew Frank and got a lesson in showing respect to an American hero.

The sergeant described Frank as the bravest man he knew and proceeded to tell a story about Frank leading a platoon on Saipan when a Japanese tank broke through their lines and pinned down the platoon, until Frank stopped the tank with a bazooka, which the sergeant said saved his life and every other member of the platoon.

Joe Tachovsky was surprised to learn that his late father was a World War II hero. He started poking around among his father’s belongings, places he never would have dared to look while his father was alive. He found a treasure trove of wartime memorabilia, including more than three years of correspondence between his dad and his mother, Roxie, as well as citations for a Bronze Medal and Silver Star and platoon rosters.

“Then I started searching online and found an article from September 1944, from Leatherneck magazine, that talks about this platoon that dad led,” Joe said.

The title of that article was “Tachovsky’s Terrors,” and tells the story of 29-year-old 1st Lt. Frank Tachovsky’s unorthodox group of battle-tested troops, who called their commander “Ski” (the author wrote it as “Skye.” He also referred to Frank’s wife as Mrs. Florence Tachovsky when her name is Roxanne).

“It piqued my interest,” Joe said. “I started to locate all the surviving members of the platoon and just wanted to talk to them. It ended up being a series of interviews because the more I learned about the platoon, the more the men wanted to talk to me and felt comfortable talking to me.”

(This interview was conducted in 2017 when three members of the unit were still alive; today just one of them is still with us.)

As he traveled the country to talk to the remaining members of his father’s platoon, and learned more about the men, his father and the hardships they endured, he saw a story coming together.
“People don’t understand the horrors of it all that these men had to live through and what they had to sacrifice of their lives and their youth for our victory,” he said.
During World War II, Japan considered the island of Saipan to be part of the last line of defense. Tachovsky’s 40 Thieves were instrumental in winning the Battle of Saipan (June 15-9, 1944), which is considered one of the bloodiest World War II battles, resulting in 2,949 U.S. Troops killed and 10,464 wounded.

Today, there is only one surviving member of the 40 Thieves, which makes this documentary-style book even more important. Readers can learn more about their war story challenges, the important women in their lives, and see historic black and white photographs. 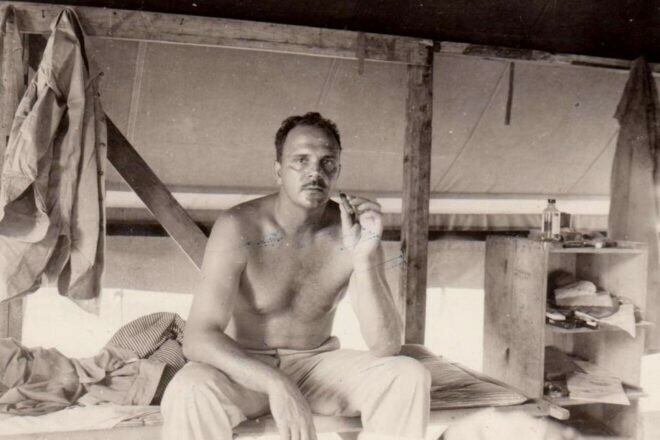 Joe Tachovsky is a successful Minneapolis-based restaurant consultant. “When you graduate with degrees in English literature, art history and theater arts, it pretty much qualifies you for a life in the hospitality trade,” he said.

He could feel the story of his father’s 40 Thieves calling to his creativity.

“It would have been so nice to have known some of this stuff when dad was alive so I could ask him pointed questions about different circumstances, but that wasn’t the case,” he said. “Thank god the seven guys that were alive were just treasure troves of information. I never really thought about it becoming a book until things started coming together. It has everything you look for.”

His first draft, submitted to a well known publisher, was written exclusively in the words of his father’s platoon members.

“Because that’s what made it riveting to me,” he said. “I’ve adapted their memories into narrative and dialogue, trying not to make stuff up. A lot of the dialogue is verbatim from these guys. They remember scenarios and vignettes. It’s amazing how ingrained these episodes are for these men.”

But the publisher told him oral histories don’t sell.

“So they wanted it written more as a story and more of the narrative, which kind of flummoxed me for a while. I finally figured out how to go about writing it, making it into a narrative but staying true to the words of the men.”

Ultimately, Joe teamed up with fiction writer Cynthia Kraack to complete the recently published (June 2020) 40 Thieves on Saipan: The Elite Marine Scout-Snipers in One of WWII’s Bloodiest Battles.
During his interviews with them, the old men of his father’s platoon went being interview subjects to his friends.

Back in 2017 he traveled to Missoula, Montana, the home of Marvin Strombo, who then at 93 was the oldest of the three surviving members of Frank Tachovsky’s platoon (Strombo died this past June at age 96).

During the Battle of Saipan in 1944, Marvin took a saber and Japanese flag from a dead Japanese officer.

In March of 2017, Tachovsky volunteered to help Strombo return the flag to the dead soldier’s family by delivering it to the Obon Society at the Columbia River Maritime Museum in Astoria, Oregon. Marvin included a note for the soldier’s descendants that read, in part, “I have always believed that it did not belong to me, it belonged to you. I pray this flag finds its way home and, if you are reading this, it has.”

As Joe grew closer to these survivors, he also felt himself coming to a better understanding of his father.
“It makes you appreciate these men so much more and how difficult it was for them to come home and the nightmares that they struggled with,” he said. “Dad never slept at night, through his whole life. He told me that’s because the Japanese were active at night. I remember my mom saying, ‘Your dad’s asleep. Don’t touch him.’ Why? You just didn’t. You did what you were told to.

And the 40 Thieves part of the story? How did a group of Marines come to be known as 40 Thieves?

“They were a raucous bunch of Marines,” Joe said. “Stealing was second nature to Marines of that era and these guys must have been the cream of the crop at what they did.”

One incident recounted when the men are in training mode in Hawaii has them steal a pig from a Hawaiian farmer so they could have a pig roast.

Joe mentions that before serving in the Pacific, his dad was stationed in Iceland with a fellow by the name of Leon Uris, who went on to become a best-selling novelist after the war. His first book, Battle Cry, recounted stories of the 6th Marine regiment in the Pacific.

“He writes about the exploits of a group of thieves in the 6th Marine regiment and that they were legendary,” Joe said. “I wrote down some of the exploits that he was talking about, and I would go to my little old guys and say, ‘Do you remember anything about stealing an Army major’s Jeep?’ And they said, ‘It was an Army captain’s Jeep and we beat the hell out of that thing.’”

In addition to the book, Joe has been telling the Marines’ story online at 40thievessaipan.com.
“I keep on updating things that occurred in their timeline,” he said.

What began as a search for an untold part of his father’s life has become a much bigger project for Joe Tachovsky.

“I’m not doing it for me,” he said. “My dad always maintained that we don’t do enough for our veterans.

I’d certainly like a good chunk of the proceeds – praise be to Jesus that there are some! – go to a foundation like Wounded Warrior or some organization that really helps these men and women who put their lives and bodies on the line. Another guy said the disabilities that you come home with, the physical disabilities, the loss of an arm or leg, you can learn to live with, but the mental disabilities, the loss of your soul, can haunt you for the rest of your life.”

Much of this story originally appeared in Door County Living magazine, and is reprinted with permission from the owners of that publication. 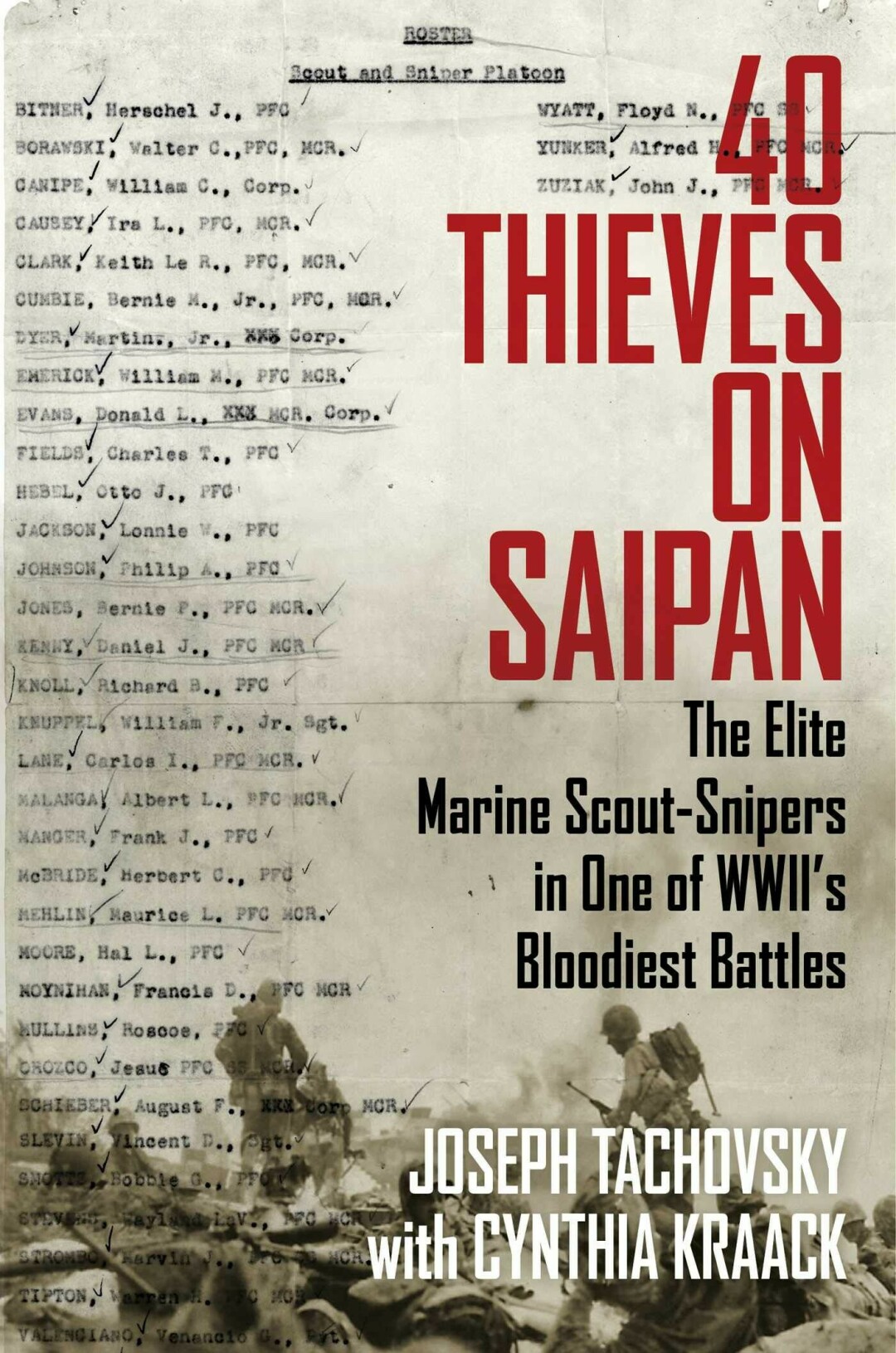