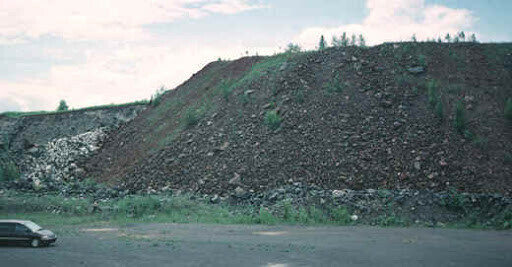 The flat-top hills on the Iron Range were built of overburden and waste from mining pits. Holes turned into Hills. Hills and Holes have much the same source, hey?

Ever wonder what happened to honest criticism? How did it get lost and become replaced by fan critique?

This type question crops up quite often when I read much-praised and highly successful works gloried among the well promoted best seller bunch.

I jaw grind at the frequent appearance of what I see as considerably less than award-winning work.
The other night while reading the effort of an author highly ranked by the NYC congratulators I came across an example of why trusting your own mind should not be waved aside in favor of glory-waving reviewers.

The award winner (who is no Michael Campbell) described (loosely) two armed guards next to a door cut in solid rock. I hope I haven’t lost you on the guards’ number of arms (4) because it tickles me more to see a useless description of rock being solid.

Is there any other kind? Rock solid is an acceptable description. Solid rock is not, at least to me.

Was the rock metamorphic granite or a friable sandstone? Both, as rock will be, definitely solid and telling the reader something more than a dash of generic nothing.

Publishers and reviewers do, I think, rely on us to be generous and not too critical of their anointed successes. In my view use of solid rock is not as telling as a reader’s forgiving nature to accept a vague nothing as if it were something.

To me the above example suggests the human social need to get along and go along is stronger under normal circumstances than a need for accuracy. Is it a tribal sort of thing?

We go along with the conventions of the group we see as ours. If our group calls for competition most of us act that way same as groups who see people as slaves of their God act in that way.

In past articles I pointed to some distinctions between East and West, but these are not strict differences and don’t seem to build as tall a hill as group affiliation.

Hupersons (to bring Trudeau some joy) tend to club together around common likes in language, music, sport, and food, etc. Shared “likes” can be innocent fun or be taken very seriously as you’d find violating a norm in some clubby communities.

Group or club approval is important to most of us. Whether we go with the flow because it’s easier or to avoid trouble is no matter. We go where we must.

Because I’m a naturally annoying sort of individual I switch around (for the sake of diversity if that will please you) so here I am in paragraph next back at the question of Eastern and Western views. Again, not definitive or causal, but interesting to think about.

Having much the same roots as the East, the West had the Renaissance, Enlightenment, Reformation, and Age of Reason as elements I find not near as culturally well set in the East.

American democracy tried to put reason and equitable application of law in place of earlier forms of justice done according to tribal rules. Pejoratively we might know this as Southern Justice, the kind that knows how to deal with outsiders, and also practiced in Portland and Seattle.

If the critter calls for special rules for certain people it is Southern (aka Eastern) in how it works.
If you’ll follow my line a little longer (boredom isn’t actually harmful, it’s only dull) I have to suggest the Western way is at least more frustrating if not more difficult to follow.

In the Eastern or tribal model you can fairly well figure who’s in or out and move accordingly with punishment or reward.

It’s a damned challenge to follow the Western model trying to figure out what’s fair, just, or reasonable. The other way is simpler. You look at language or style or color and you see which way to go.

Why just recently the lightweight mayor of a major U.S. city declared democracy was back because her party (tribe or etc.) won. If a particular side winning is democracy then the planet has been forever democratic. (Hmmm, there’s a thought.)

It’s especially interesting to me because the mayor is from a city well known for corruption at all levels. Patronage jobs were a fact of Chicago life. I know from having had relatives involved.

Not politically important, they weren’t paid much for doing next to nothing, but being paid at all is enough to signal corruption. Being non-qualified along with not being paid much is rather democratic in a way that seems fair to all.

When reason faces unreason who does the work? Who will be defeated by implacable unreason? Being reasonable, one side has a hell of a challenge sorting out claims of bias and community norms and unfair treatment. The easier way hold fast to the certainty that democracy or justice wins when they do. Not so easy finding satisfaction in defeat. Not easy at all, but necessary unless defeat means subjugation.

Like the old deity Janus, Justice has a second face known as revenge. The real and often personal cost of reason comes from angering the tribes. Unpopularity carries a steep price, one easily ignored unless you’re the one earning the wages of the maligned.

Parting thoughts: Not keen on turkey (Polish ham is OK if you’re serving) I’m not an eager Thanksgiving Day celebrant. But, I like the idea of pausing to be thankful.

Whether your thanks are real of fake is up to you, but even false gratitude beats a meal of resentment.
This Halloween I couldn’t help connect superstition over carved orange pumpkins and dread of another orange-head boogey or the irony of a whitened replacement.

In the cause of justice no injustice is too great, for others to bear.