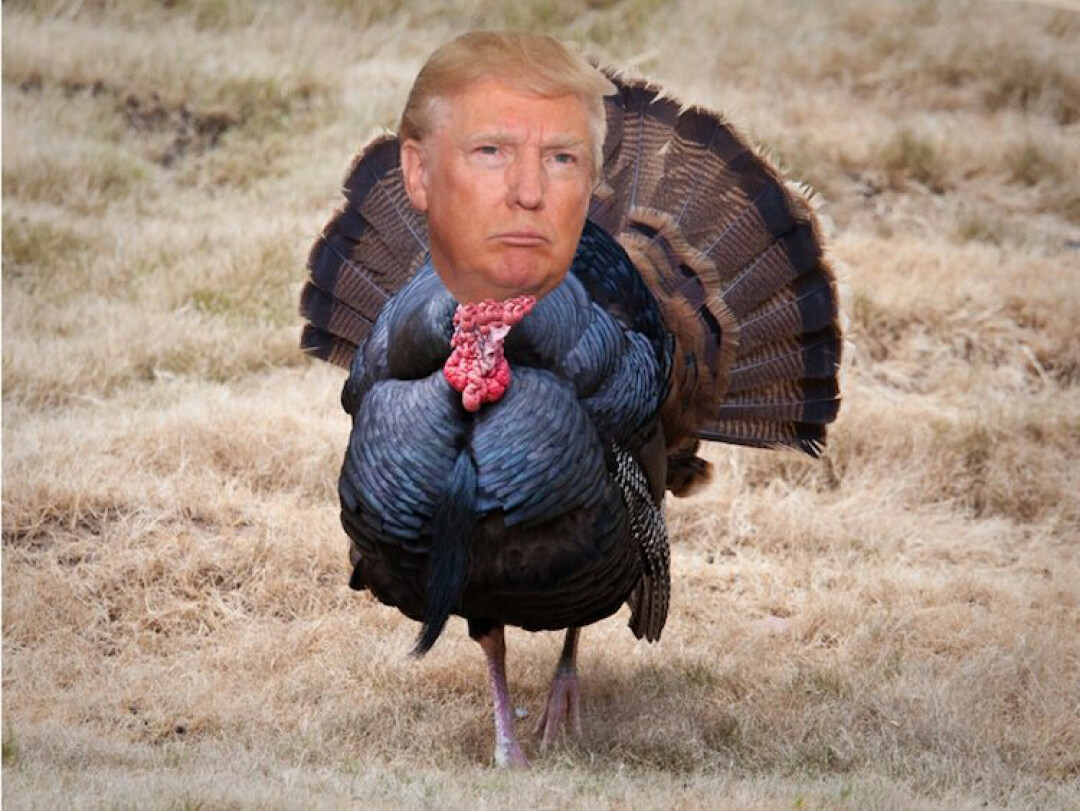 Remember George Washington who could tell no lies?

Both of these truth-telling Presidents set aside days for Thanksgiving, the former as a day to give thanks for our new Constitution and the latter to celebrate a Union victory at Gettysburg.
They set a standard for decency and integrity that has stood the nation in good stead ever after.

To our nation’s great peril future generations will have the example of Donald Trump, who has set a standard for prevarication that would be the envy of Goebbels’ Ministry of Propaganda and Stalin’s NKVD. Trump’s legacy will be that of a cult of personality.

What reward has Donald Trump earned for his retirement?

Since my childhood American Presidents have been pardoning turkeys at Thanksgiving for the crime of being succulent with mashed potatoes, dressing and gravy. After the last four years our liar-in-chief, more corpulent than succulent, does not merit the same consideration.

The defeated Donald Trump is like a husband who murders his wife because she will no longer put up with his cheating. But the unfortunate spouse in this case is the United States. An angry Trump is pouring sand into its gears for electing Joe Biden.

What else could you expect from a President who separated brown children from their parents, quashes payments to stave off economic collapse and misinforms loyalists about face masks leading to a quarter million American deaths?

Some of us remember the clemency of President Ford who pardoned Richard Nixon. At age 23 I was one of the few Americans who agreed with Ford’s compassion, which would cost him the election two years later.

Nixon came closer than Trump to admitting his sins and I felt that jail time for the soiled ex-president would sow more discord than letting him sulk quietly at his home in San Clemente.

I don’t feel that way about Trump. The violence to the law committed by Nixon pales compared to Trump’s. Republicans took the lead in shoving Nixon out of the Oval Office.

Trump’s army, like Stalin’s NKVD, calls the shots and anyone who dares question their savior is quickly brought to heel. It is a very public Fifth Column.

Trump should fare no better than Confederate traitor President Jefferson Davis, who was imprisoned in Ft. Monroe, Virginia, after he was caught as he tried to escape justice wearing wife’s shawl.

The courts have yet to rule on Trump’s transgressions and I am content to grant him his freedom while he defends his Presidency. It will be like old times for Trump who, before he was President, had 3,500 lawsuits under his belt. His billions, his lawyers and his threats kept him reasonably insulated from his many victims.

These were petty offenses like stealing the livelihoods of people building his properties, selling useless university degrees, robbing his brother’s children of their father’s inheritance and cheating on his taxes.

As President the damages grew exponentially while he tweeted daily lies to his adoring followers.

His asinine claim of having the election stolen from him ignores his desperate attempt to bankrupt the Post Office to prevent mail-in ballots or forcing voters to choose between the risk of being infected with Covid 19 and their civic duty to cast a ballot.

As for the nation’s security only God and Vladimir Putin know what secrets he hid from America when he prevented American translators from being present during his private conversations with Russia’s dictator. When Vlad is gone some Ruskie translator could make lots of money telling the world about those conversations.

Donald Trump seems to have weaseled out from the evidence he withheld from the Congress during his impeachment. He’s denying Americans the orderly and tranquil change of administration they deserve. His lies and self promotion enjoy limited free speech rights that are not dampened in the least by the surge of corona-virus deaths.

But Trump’s insidious election tampering can be measured by one earlier fiasco. His vote suppression rivals the Southern states of 1860. They wouldn’t let Abraham Lincoln’s name be placed on their election ballots. But when they lost the South didn’t protest that the election was unfair. The South knew that Lincoln had won. They simply seceded from the Union.

So pixilated are Donald Trump’s purple Kool-aid drinkers that they can’t believe four years of tweeting middle fingers to America could possibly have caused Trump to lose by six million votes. His heavily armed supporters conspired to kidnap Michigan Governor Suburban Housewife while they mulled the Isis-like idea of decapitating her on television. Is it any wonder that mask-wearing “suburban housewives” everywhere abandoned Donald Trump in droves?

A pardon for this turkey would be an outrage. His far more likely future is that of a cooked goose.

Harry Welty barely hides how pissed off he is at lincolndemocrat.com.