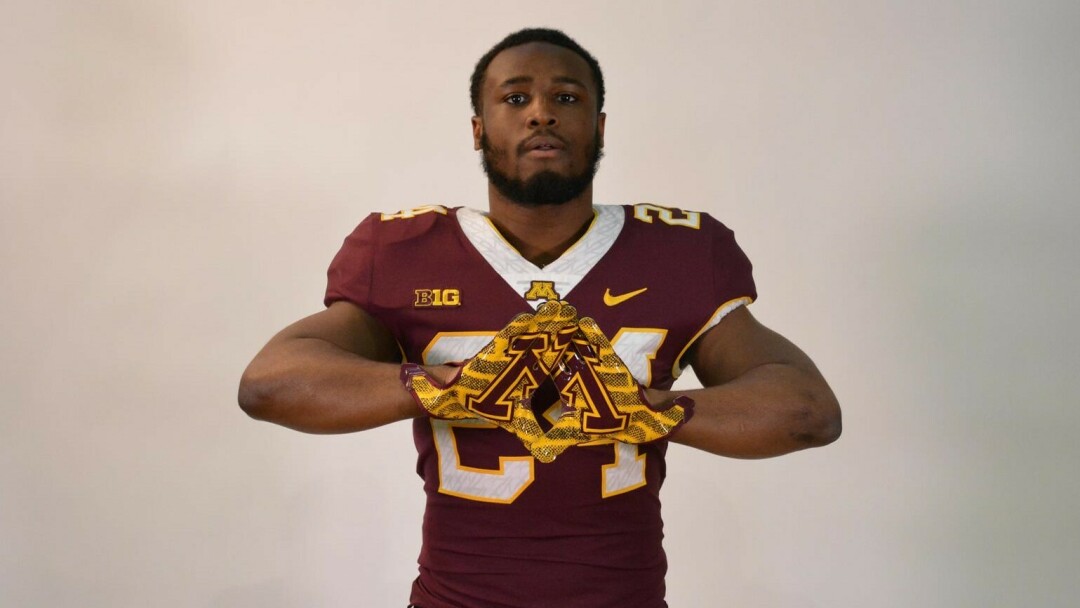 Mohamed Ibrahim has gone into beast mode with the Gophers and appears to be unstoppable at this point.

Carlton Peak – You know, this in-between NHL season thing is already wearing on me. Oh, there’s news, signings and trades going on, but I should be enjoying my minimum two-game per night intake right now, but it isn’t available.

There is plenty of football to observe, so that’s good. But neither the Vikings nor Gophers are providing any high-level gridiron thrills at this moment.

I must say, though, that for the Vikes to go into Lambeau Field a couple of Sundays back and lay one on the Cheeseweasels was epic. That brought some immediate smiles. My brother Paul had said all week that he had a feeling about the game, and he called it. I wasn’t as optimistic going in as he was.

The Gophers, after a promising early Game one performance against Michigan, promptly fell apart. The Wolverines made some adjustments, the Gophers did not, and got their posteriors handed to them.

Considering the personnel losses from last year’s club, though, this can’t be a surprise. Also, the Gopher special teams are a mess right now. They are down to their fortieth string kickers and punter due to injuries and have had to make adjustments in the kicking game that hasn’t worked to their advantage.

The Gophers traveled out to Maryland and did not fare well there either. It’s not a stretch to say that the special teams cost them this tilt against a suddenly powerful Terrapin club.

The Gophers went back and forth with them, had to fight to get the game to OT, and then lost when a PAT attempt missed to keep the contest alive.

The Terrapins put a knockout blow upon the Penn State Nittany Lions’ skulls on Saturday in a 35-19 beatdown. Oddly enough, the surging Terrapins have not cracked the top 25 ranks as of yet.
Saturday, the Gophers were in Champaign and beat the hapless Fighting Illini 41-14.

Or should I say that Mohamed Ibrahim beat the Illini? This player has gone into beast mode and appears to be unstoppable at this point.

Does he have a pro future? I’m not sure about that. He is undersized and isn’t a speed merchant. If he gets the edge before the defense against him does, he’ll be off to the races for a bit. But he can usually be tracked down, and that goes back to his overall speed.

It is safe to say, though, that when the rock gets handed off to him, there will be some excitement.
And the team is doing this without a complete offensive line due to injuries. If all breaks well for the Gophers, they could finish out the schedule with a 3-2 run. That would give them a 4-4 final record.
Time will tell for the Gophs.

With consecutive wins for the Purple, they are suddenly being discussed for a playoff berth.
I don’t see that myself, and if they were to get in, it would be a one-and-done situation for them.
While the recent heat applied to the backsides of GM Chris Spielman and Head Coach Mike Zimmer has eased a smidgin’, I don’t believe they’ve been removed from the stovetop yet.

But, if anything, the Wilf family are loyalists who like stability in their most important spots. The roster is in transition, and this type of won-loss record wasn’t unexpected. I say build for the future and look ahead.

I HAVE GIVEN THE NHL offseason a lot of thought, and this theme has occurred to me. There might be nothing to it because I believe Gary Bettman operates this league with as high a degree of integrity as is possible.

On the other hand, I wonder, is the annual Entry Draft Lottery rigged for specific teams to obtain the overall number one selection spot?

I mean, that could be far-fetched, of course, but here is how my theory unfolds – The value of the TV contracts between the various sports leagues in the U.S. and the networks are determined by the size of the markets the teams are in. That isn’t the sole factor, but it carries significant weight.

The NHL has teams in 14 of the top 20 (soon to be 15 with Seattle) of those markets (6 of 10 in Canada).
To keep the value of those deals as high as is possible, you would want as many of those upper ranked teams to perform well and keep the interest in them high. It is equatable to more dollars in the TV deal.
The current lottery-style draft commenced with the 2004 entry draft. Since that time, 9 of 17 Number one picks have gone to the top 20 TV market clubs.

Do the math and odds favor my theory? Well, not in an overwhelming fashion.

I admit that my suspicions were aroused when the NY Rangers got this year’s overall Number one. Especially in a year with a generational talent available in Alexis Lafreniere. That could set the Rangers up for seasons to come. And solidify their league positioning in the biggest TV market in the country.

The Blackhawks were languishing in hockey nowhere land for seasons and then got the #1 pick in Patrick Kane. They already had Jonathon Toews with the #3 overall in the previous draft. They’ve mostly consumed hockey gravy ever since.

Pittsburgh is the 24th largest TV rank, but obtaining Sid Crosby in the 05 draft kept them in PITT and delivered multiple Cups. The club already had Evgeni Malkin (2004 draft, #2 overall) to give the Pens their dynamic duo.

You can draw this parallel to Canada as well. In six years, the Edmonton Oilers drafted first overall four times. Edmonton is the fourth largest Canadian TV market, is one of the country’s essential hockey locales and in its importance to the league. But since the Oilers can’t seem to get out of their own way and build upon their roster, it has done them little good.

In Ontario, Toronto is the most significant Canadian TV market by a long stretch. It doubles the size of the Montreal market. So is it a surprise that the Leafs obtained high-quality player Mitch Marner in the 015 draft at fourth overall?

And then followed that up with the Number overall in Auston Matthews the very next draft? All clubs need at least a one-two punch to get to Cup contender status, and my theory is rife with examples of that.

Is this a coincidence?

It could be, but then again, I believe my theory deserves at least a more in-depth look. It stands to reason that teams will be located in population centers.

It doesn’t stand to reason that those teams will dominate selection in a somewhat weighted but otherwise “neutral” process.

My eyebrow is now raised.