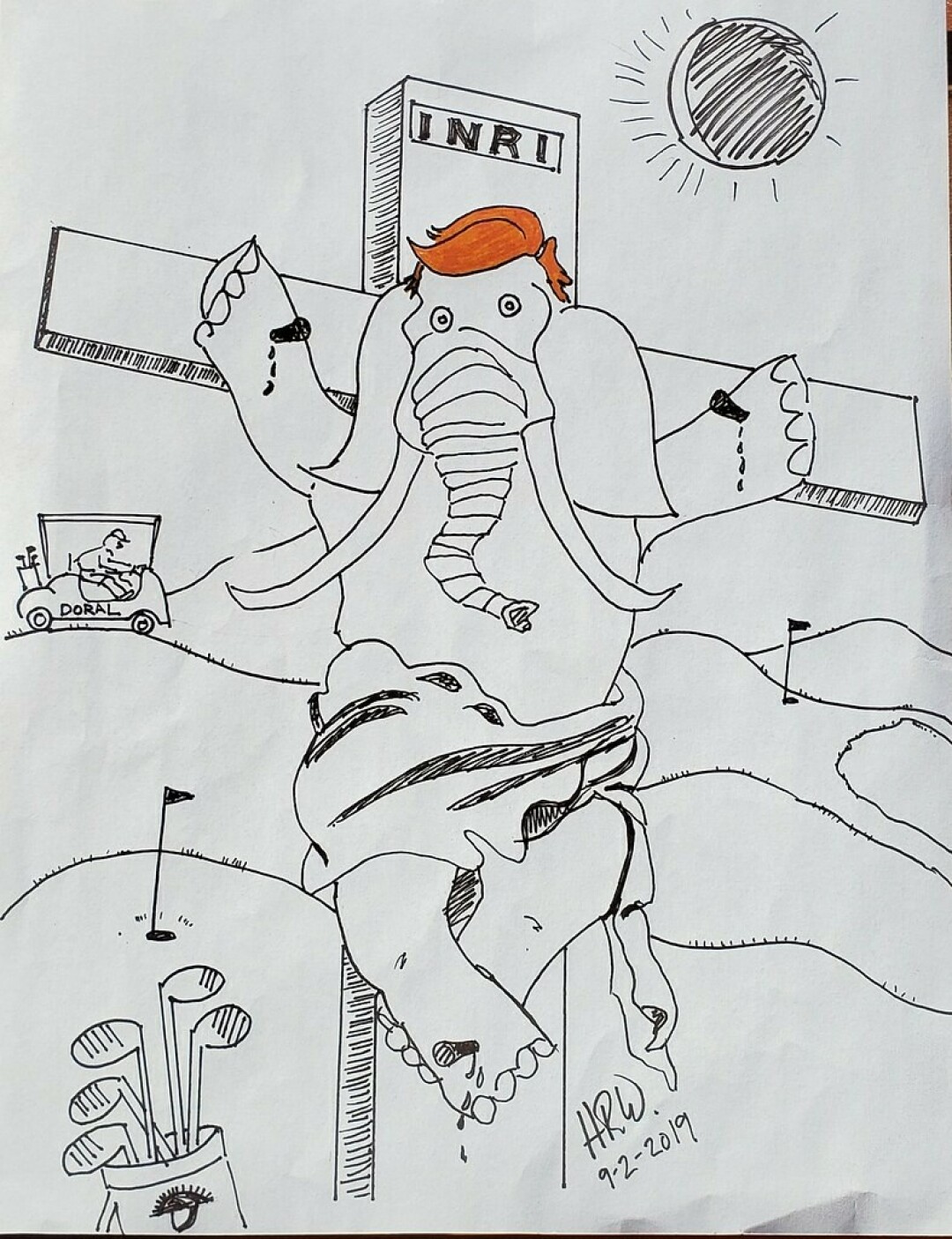 A yellow-headed Republican is a poor substitute for Jesus on the cross. Illustration by Harry Welty.

No, Mr. Trump. You did not win the election. America won. So far.

And as with other wars victory has come, is still coming, with great loss of life. The war you have waged for your reelection and against truth and science will have cost more lives by the time Joe Biden is sworn in than any war of combat in our nation’s history. Your reelection campaign has been a crusade on behalf of those most loyal to the Trump fad especially evangelical voters.

Christian fads are nothing new. Before Christianity became Rome’s state religion, some early Christians yearned to die in the Arena in an ostentatious display of martyrdom. Distressed church fathers tried unsuccessfully to discourage them.

Closer to our time itinerant preachers would give such invigorating shows of hellfire piety in Indiana’s backwoods that a very young Abe Lincoln would mimic their fervor to entertain his friends.
When my children were little, evangelicals ruined Halloween by calling trick or treating an act of Satan worship.

At the coming of the Millennium evangelicals warned of the “Rapture” that would leave the Earth littered with the cast off clothing of the saved and a sorry lot of the damned who would be “Left Behind.”
In my youth preachers burned Beatles records across the South when John Lennon joked that the Beatles were more popular than Jesus. And they were!

Today’s preachers should be burning the Art of the Deal. Instead, they treat our reality show “billionaire” President as the epitome of their prosperity gospel. Now the rich can be sure of passing on to heaven, never mind the camels which are stuck in the eye of a needle.

Here’s the truth that could set so many free – Donald Trump is not the second coming of Christ. He is much more likely to be found in the Book of Revelations, if you know where to look.

A second Civil War will not happen. Farmland and city can not be as easily sundered as two swaths of territory north and south of the Mason-Dixon Line.

There was no blood shed on election night 2020 despite Trump’s encouragement.

He has been an incompetent dictator. Mitch McConnell-led Republicans are not incompetent. They have perfected all the political mechanics to tilt elections in their favor: gerrymandering, voter suppression, untraceable dark money and the iffy restraints of social networks.

To enforce their tinkering they have guaranteed 40 years of Republican packed courts.

And most troubling, after Trump new candidates will have a much longer leash to sell snake oil. 240 years of America’s presidential succession is under threat here as it is in many nations that once followed the American example – the American experiment.

Until Alzheimer’s overtakes me I will not forget how silent the Republican party has been in the face of Donald Trump’s violation of common decency, his narcissistic refusal to concede defeat and his 20,000 lies.

I listened carefully to Joe Biden’s speech after Pennsylvania’s votes were assured. He spoke hopefully of our “Possibilities” which reminded me of Hubert H. Humphrey’s definition of politics as “the art of the possible.”

Biden drew on the popular religious anthem “On Eagles Wings” to bear up America.

I liked what I heard. The following morning at our church’s television worship I heard the lyrics to another hymn that America should keep in mind: “When I look into the face - of my enemy - I see my brother - I see my sister.”

That’s a New Testament message that evangelicals could and should champion. Or they could remember what Abraham Lincoln, the war President and founder of President Trump’s political party, said: “My concern is not whether God is on our side; my greatest concern is to be on God’s side … ”

My daughter recently learned that her 10-year-old son had stopped reciting the Pledge of Allegiance in School. Instead he stood in mute but respectful silence. After last week’s election he confided that he could once again begin reciting it.

Jesus said, “The truth will set you free.”

When not writing in his blog Harry Welty can be found standing in front of mirrors sticking his tongue out. Sometimes you can catch him doing it at lincolndemocrat.com.