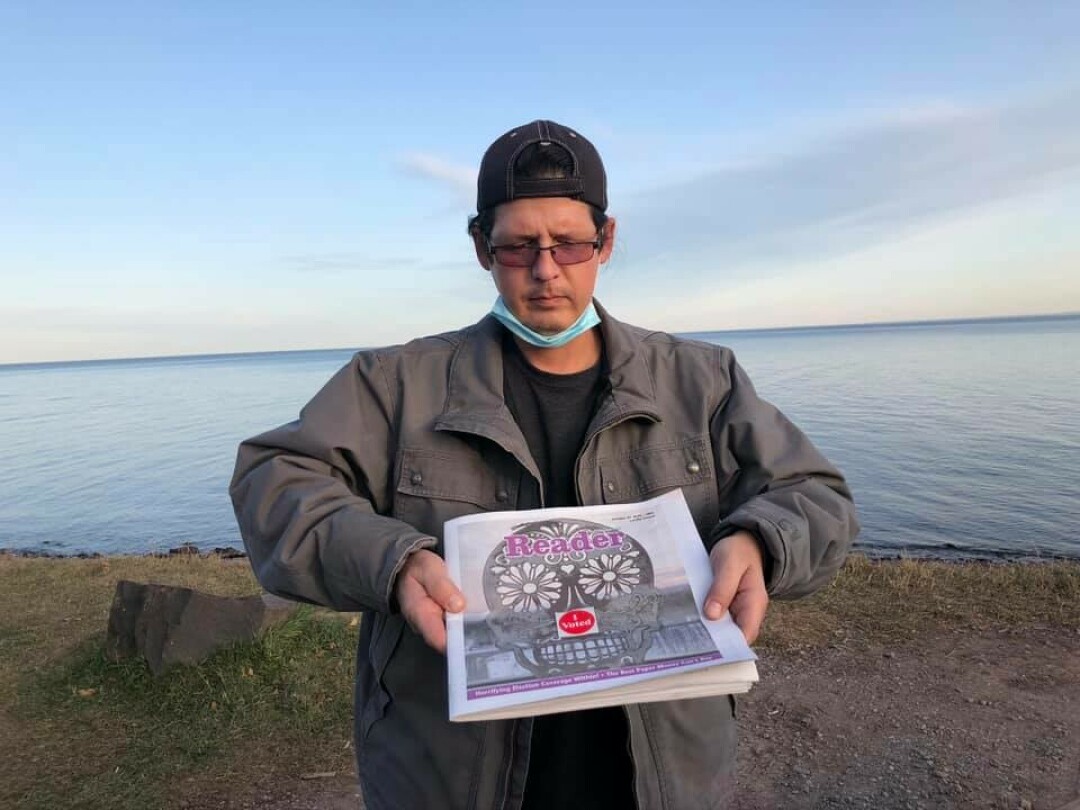 Gene McKeever sent this photo of his nephew who voted for the first time in the November election.

So long to a tinpot dictator!

Well now we know. Trump’s supporters did not just vote for him because they were abandoned economically, or because of the psychological pull of authoritarian propaganda, but because they share his values. After 4 years of corruption, racism, lies, incompetence, cronyism, misogyny, bullying, ignorance, the coddling of violent extremists and the destruction of countless environmental safeguards, his supporters said, “that’s all fine by me, lets have 4 more years.” Majority-rule democracy is under attack, and we are on the verge of becoming a banana republic with a tinpot dictator. Divided we fall.

Gary Kohls continues his campaign of misinformation and disinformation about SARS-COV-2, testing and vaccinations. His November 5th column begins with the lie that “the elusive (and therefore dubious) SARS virus has not yet been isolated in the lab, much less been reproducibly grown in living tissue culture.”

Fact: On January 20, 2020, CDC received a clinical specimen collected from the first reported U.S. patient infected with SARS-CoV-2. CDC immediately placed the specimen into cell culture to grow a sufficient amount of virus for study. On Feb. 2, 2020, CDC generated enough SARS-CoV-2 grown in cell culture to distribute to medical and scientific researchers.

Kohls then proceeds to describe our current situation as an “alleged pandemic which has relied on testing with the equally dubious PCR test kits...” The test kits are properly described as RT-PCR, which stands for Reverse Transcriptase Polymerase Chain Reaction. It’s the PCR portion that Kohls has issues with. It is an extensively tested technique for identifying short chain sequences of DNA. Kohls claims “the PCR test’s inventor has repeatedly asserted that his test CANNOT be used for diagnostic purposes.” Fact: PCR and RT-PCR are widely used around the world for diagnosis of viral disease. The test is extremely accurate and sensitive.

The test inventor, Dr Kary B. Mullis won a Nobel prize for his work. He died in 2019 before the pandemic started so he had nothing to say about SARS-COV-2. He additionally never said the test could not be used for diagnostic purposes. That notion circulated this past summer on Facebook and fringe websites – the very places Kohls does his research. There are several debunkings of this by responsible organizations such as Reuters.

Kohls then expresses doubt that asymptomatic people with a positive test are truly infected, calling it “conventional wisdom.” Conventional wisdom actually did not expect high asymptomatic infection rates based on experience with SARS-COV-1. These people go on to develop antibodies so we do know they were infected. Kohls must know this.

All of this is in the first four paragraphs of Kohl’s article. It’s clear Kohls has no training or expertise in virology or diagnostic testing. He then goes on to disparage the proposed vaccine protocols in his typical tendentious fashion, taking issue with statisticians who design the trials because he knows better. He suspects they’re crooked and own company stock. He doesn’t like the risk reduction statistics in particular but doesn’t tell the reader that continuing information is accrued from vaccinated people far beyond the phase three trial.

On the date of publication of Kohl’s article there were 123,718 newly diagnosed Covid-2 cases and 1,154 deaths. The world needs an effective vaccine as soon as safely possible. Some risk attaches to any new vaccine and can only be discerned by trials and follow up. The world also needs accurate information. Robert Boone, that’s your responsibility. Kohls is intellectually dishonest and needs to go.

We already are socialist

Socialism was “lingua franca” throughout 2020 election.

Because too many people do not know the etymology and/or meaning of this Latin word, it is confused with Communism. I studied Latin in the seminary and so did many people my age and older in public schools, but unfortunately Greek and Latin are not studied any longer, except in some universities, etcetera. Politicians and parties are using socialism to confuse and scare the people.

Our system is socialist and capitalist – all public services/programs like education, medical assistance, medicare, public works, postal service are socialist. The private enterprises are capitalist. I support both. I am for socialism where it belongs and capitalism where it works.

Why should private medical insurance have a monopoly?

As I said, I am not against capitalism. Why are so many politicians against competition in medical services?

So I waited until I was eligible for The Socialist Medicare. My monthly medicare and supplemental insurance premium was and is only $150 per month.