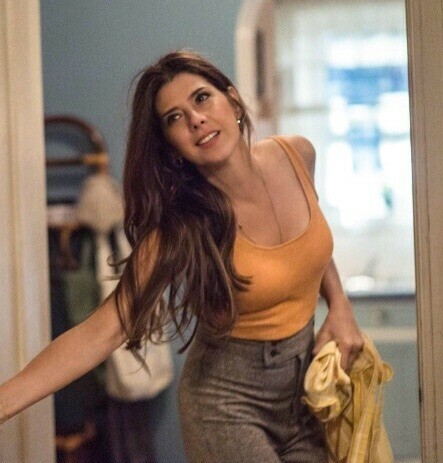 Aunt May, is that you?

OK, serious poetry students, it’s time to review the rules for double dactyl poems. Groan if you must, but knowing and abiding by these rules will help you avoid a visit from the Double Dactyl Police, because if you thought the nuns were hard on your knuckles, try replacing that ruler with a truncheon.

A dactyl, you may remember, is a three-syllable word with the emphasis on the first syllable, so a double dactyl goes DUH da da DUH da da. “Simple,” you might say. “All I need is a six-syllable word.”

Not so fast. A name like Ludwig van Beethoven works out great. But Christopher Columbus is also six syllables and would only work out if you pronounced his last name COL-um-bus, which nobody has done since his mother called him in late for lunch.

So the first line of the poem must be a nonsense phrase with the requisite number of syllables, and the second line should be a double dactyl name. This is an inviolable rule, which should only be broken by professionals or habitual scofflaws, as in this poem:

Flickery, dickery
Professor Hawking
Reflected on black hole’s
Absence of light.
Stars which approach them
Cosmicologically
Give up their masses
And vanish from sight.

Note that Hawking’s name is illegal in this context. He is deceased now, so he would never know if we added another syllable to it. I’m open for suggestions.

Finally, there must be a double dactyl word somewhere in the body of the poem. It is usually the penultimate line, but I am told it can be pre-penultimate or post-penultimate if you can’t otherwise manage it. And here is the tricky part: it should not be a word that has already been used by some other poet. The answer to that is easy: stop reading double dactyl poems. Then you can claim ignorance if you are called on it. Playing dumb is the first line of defense for a guilty poet. Some really great words are double dactyls, so you can count on it that many poets are going to glom onto them. Scientific terms are popular, and many of the fields of study that end in -ologist will work:

Higgledy, piggledy,
Australopithicus
Leaving his bones on
The African plains
Would be amazed to see
Paleontologists
Making a living by
Picking his brain.

You have to be careful the field is legitimate. If you use, say, astro-proctologist in some mass market magazine, you may get called out by some officious egghead.

Sometimes you can get away with using a compound word without any nitpickers noticing:

I wrote this for my little boy, who’s a big Spiderman fan and is also pushing 50. I blame myself. When I told him I was writing this piece he asked, “Are you going to write anything that will embarrass the family?” I replied, “No, son, you’ve taken pretty good care of that job.”

One of the most important uses of poetry is to provide people with a smattering of history they might otherwise be unaware of, or to illuminate the lives of actual historical figures. Once again, poetic license comes to the rescue, as it so often does:

Benechi, Wenechi
Luisa de’Medici
Bouncing through Florence
As big as you please,
Says that her diet is
Mediterranean
Served on a burger with
Bacon and cheese.

Her actual name was Anne Maria Luisa de’Medici, which sounds Spanish, but she was an Italian girl as far as I know. I imply that she is fat, but I can’t prove it. But then, neither can you, probably, unless you want to be a big dick about it.

THE TWIN PORTS REVIEW OF BOOKS

As an occasional subscriber to The New York Review of Books, I have often wondered why those snooty Easteners think they have a monopoly on reading books. The pandemic has forced even anti-intellectuals to consider reading books again. The question is: what books? At my age, my attention span dictates my choices. The first criteria is that it needs to be a book with short chapters. None of those “significant” books which require too much thinking either. With this in mind, I have set out to find the books which will satisfy that quest for culture I’m sure all of you have been pursuing, while not overloading your brain with “facts.”

Because I plan on doing a lot of reading, I am doing a lot of book shopping online, primarily in the used book market. These books can usually be obtained very cheaply. There have been a few clunkers in the books I have read so far, but there are also some treasures. Here are two of those: 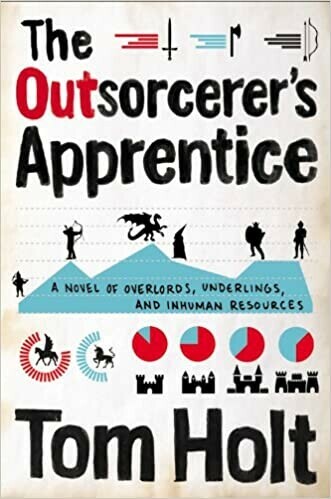 The Outsorcerer’s Apprentice
By Tom Holt

If you are familiar with the theory of the multiverse (and you should be if you watch Star Trek, The Flash and a hundred other shows on the syfy channel), and you understand what infinity means, then you know that with all those universes, there are bound to be some where the physical laws differ from ours. For some, these physical laws may permit effects that appear magical to us. Suppose for a moment that a man could produce a portal to such a universe, and that while exploring it, he found a forest in which the trees talked. An ordinary shlump would probably find the tree’s conversations endlessly interesting, but a man with a true entrepreneurial spirit would recognize this as a business opportunity of a lifetime: A perfect scenario for a call center! The trees are happy to have something to do; they are tired of hearing the same old neighbors talking about the same old boring tree topics. They work for literally nothing - a little fertilizer and an occasional watering, and they’re on the job 24/7. A capitalist’s dream! No overtime pay, and a workforce that doesn’t even take vacations!

This book has it all. A Goblin King that drinks margaritas out of the jewel-encrusted skull of his predecessor (the jewels spell out WORLD’S BEST BOSS), wolves that can’t be talked out of dressing up like old ladies, and a girl in a red hoodie who worries about the viability of the wolf pack population and the woodcutter’s economic model. An Elven orchestra plays “Ode to Spring” until a br-ring is heard, and they stop while a beautiful female voice says “Thank you for calling Klamath Industries. Your call is important to us. Please stay on the line and a representative will be with you shortly.” The conductor drops his baton, and “Ode to Spring” resumes. Dwarves, elves, dragon killers and other gullible humans abound.Everything works like clockwork until the wizard’s nephew uses his portal and then tries to make a doughnut. 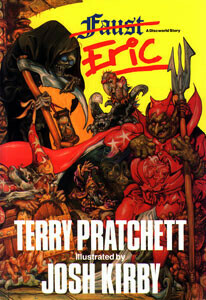 Eric is a precocious 13-year-old Demon summoner who gets, by mistake, Rincewind, a somewhat incompetent wizard. Despite that little hitch, he is still determined to get his three wishes, and like most stories in which people get three wishes, actual results do not necessarily correspond with his expectations.

Eric lives on a world which is an analog of Earth in some respects: There are meso-American Indians (sort of), Greeks and Trojans (kind of) and a Ulysses-like character who is just trying to get home from the war. He’s only 200 miles from home, so how hard could it be?

An even more sympathetic character is the Demon who guards the Gates of Hell. He feels completely out of the loop. Who, exactly, is he supposed to keep out? Who in their right mind would try to enter? He’d like to just go home and enjoy a flaming hot beverage, but he seems to have been forgotten under the new management.

Hell is an enormous place, so obviously, Satan can’t do it all by himself, he needs a manager to handle the day-to-day business. The manager, who loves to get his hands dirty, decides that the old concepts of Hell are not working. Souls don’t have nervous systems, so while the flames and the boiling blood are dramatic, they are incapable of inflicting pain. Hell needs to consider ways that will really torture the sinners. The worst thing to happen to a human, he concludes, is to be bored to death. This is truly evil: since they are already dead, that path is not open to them.

So here is the scenario: imagine a group of humans chained to a very uncomfortable davenport, while a Demon and his succubus wife show them pictures from their last vacation.

This is a diabolical book on more than one level. It is only one book of a 23-book series which is designed to keep Mr. Pratchett in the lap of luxury for some time to come, unless you’re like me and can find his books on the used book market.

(Editor’s note: Unfortunately, Sir Terry Prachett died in 2015, so it’s highly unlikely anything is keeping him in the lap of luxury these days.)