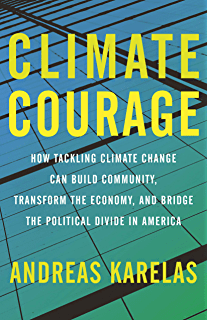 On Sept. 30, the Pew Charitable Trusts published an article entitled “Rising Waters Threaten Great Lakes Communities.” The article reported that Duluth had seen $26 million in damage due to storms on Lake Superior striking the city’s eight-mile lake walk and the water treatment plant. Duluth’s mayor, Emily Larson, talked about the difficulty of providing all of the city’s essential services and, at the same time, addressing the costly undertaking of dealing with climate change. “So many communities are stuck band aiding and doing their best, because no one has set the table to talk about it honestly,” stated Larson.

Larson is right. It is a struggle to find the necessary funds to fulfill all of the city’s services and also figure out how to finance any climate change initiatives. Having worked with two city governments in the past myself (Louisville and Raleigh), I know that it’s a challenge for many cities to successfully budget for basic services and still be able to deal with a major crisis.

And the mayor is also right about setting the table for an honest discussion about climate change. In fact, Duluth needs to have that talk soon. The problem is that the city government hasn’t set a table and therefore, the greater community can’t even be invited to sit at that table for an honest conversation. There are a number of community stakeholders who are concerned and knowledgeable about climate change but the city doesn’t appear to be interested or wants to hear what they have to say.

When I think about the climate challenges facing Duluth, I am reminded of what two different cities did to engage and embrace the greater community. In his book Hot: Living Through The Next Fifty Years On Earth, Mark Hertsgaard interviewed Ron Sims, who was the chief executive of King County in Washington. With a municipality that included Seattle, Sims wanted to develop a climate policy that included social justice and pro-business economic development. Sims believed that many U.S. municipalities were setting themselves up for failure because they continued to support “sprawling growth patterns” that would only result in more people driving and more greenhouse gas emissions.

Not only was Sim committed to having climate change central to the mission of every department in county government but he also realized that government alone couldn’t successfully address the climate. Sims helped convene a conference in Seattle by bringing schools, churches, the business community and general public together to identify and address the impacts of climate change. After the conference, in collaboration with the Climate Impacts Group, a group of scientists from the University of Washington, Sims and his staff published a guidebook on climate adaptation as well as how to prepare and implement a climate action plan for houses, business and various organizations.

Steve Lerner, in his book Eco-Pioneers: Practical Visionaries Solving Today’s Environmental Problems, highlighted the work of David Crockett who served as a councilman in Chattanooga, Tennessee. Concerned about the city’s economic recession, Crockett worked with a series of environmental groups, as well as schools, builders, hospitals, bankers and craftsmen, on an integrated planning process for a high- growth suburban area near the city where they thought the development was getting out of control. Through “Chattanooga Venture,” a project that brought together thousands of local citizens, Crockett and others wanted to create a “defining place for sustainability.” From working with Chattanooga State College to establish an Environmental Science and Technology Division, and training local students to fill environmental technology positions, to rebuilding the sidewalks with beveled paving bricks that allowed rainwater to be absorbed into the ground and planting trees along the streets and around surface parking lots to provide shade, clean the air, and moderate temperatures, and establishing a business incubator for startup enterprises, there was a growing consensus to revitalize the city, preserve natural resources and reverse the exodus of people leaving the city for the suburbs.

So, to the mayor, city council and all of our community leaders, let’s start setting the table for an honest and constructive conversation about climate change and how Duluth can become a more resilient, sustainable and environmentally just city. And that means inviting groups like the Sierra Club, Minnesota Interfaith Power and Light, Duluth for Clean Water, Citizens Climate Lobby and Duluth Climate Emergency as well as groups representing the most vulnerable people in our city, including the Damiano Center, One Roof and the Community Action Agency, to the table.

As Andreas Karelas talks about in his new book Climate Courage, climate solutions start by sitting at a table, where we look each other in the eye in order to listen, learn and establish trust. Well, Duluth, it’s time to set the table.

Tone Lanzillo is the coordinator of the Duluth/365 project, asking people to engage in climate change actions within the next 365 days. For more information email risson1954@gmail.com.