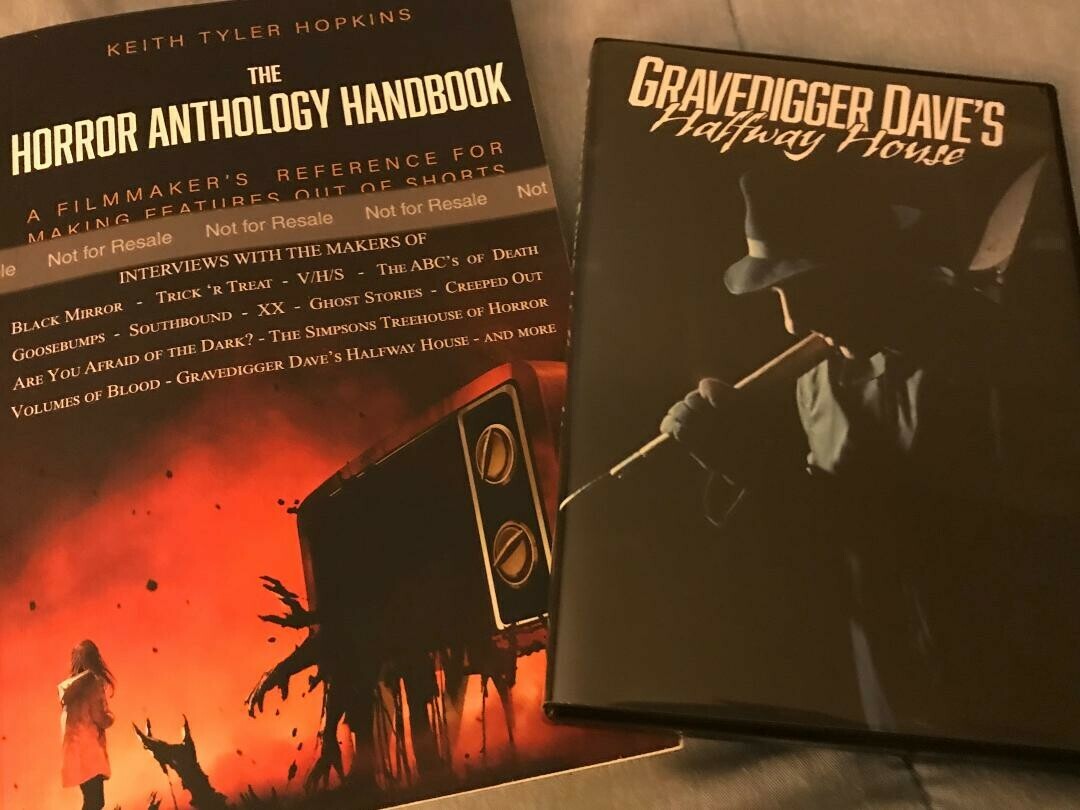 The genre of horror stands unique, besides perhaps science fiction, in how it works well as a short story. Many horror fans are aware of anthology films like “Creepshow” and television series such as “The Outer Limits.” Edgar Allen Poe is well known for his short horror stories and in more contemporary times, Clive Barker's “Books of Blood” stands out as a collection of short and terrifying works. If there was ever a collection of short romantic comedies, they have never reached the popularity of the horror anthology.

In the case of Duluth filmmaker Keith Tyler Hopkins, it was his memories of sitting by a campfire as a Boy Scout with friends and their fathers telling ghost stories in the dark that began the inspiration, to not only make a film anthology of ghost stories himself, but to also put together a book about horror anthology for filmmaking.

In 2019 Hopkins released his own collection of Northern Minnesota specific ghost stories to film in a feature, “Gravedigger Dave's Halfway House.” With the help of a grant from the Minnesota State Arts Board, Hopkins visits locations such as The William A. Irvin, the old Nopeming Sanatorium, The Duluth Train Museum and The Norshor Theatre among other sites to share stories of hauntings and paranormal activity.

The film is broken up by the "host," Gravedigger Dave, as he tells these stories to a little girl in a shack that lies somewhere between the living and the dead. Many of the stories are actual interviews with paranormal investigators, property managers and others who have witnessed unexplained events. There are also a couple of stories with actors portraying horror-inspired encounters. The feature itself is of interest to anyone wondering about haunted phenomenon in Northern Minnesota.

Before taking on the task of making his own horror anthology, Hopkins felt research was needed. I his book, “The Horror Anthology Handbook: A Filmmaker's Reference for Making Features out of Shorts,” he writes, "After realizing how much work it'd be to deconstruct an entire horror subgenre in this manner, I took to the internet looking for a book, thinking there must be an author out there that'd done the work for me. I searched high and low. Nothing."

Ultimately this realization gave him the idea to get to work on making his own book, specifically on horror anthologies. Getting ahold of people in the film industry isn't always easy, but Hopkins managed to contact and interview directors, producers, and actors from works such as “Black Mirror”,” Trick 'r Treat”, “V/H/S”, “The ABC's of Death”, “Goosebumps”, “The Simpson's Treehouse of Horror”, “Southbound” and more.

Reader: It's an impressive list of moviemaking talent you got into contact with for your book. Who were you most excited to have get back to you?

KH: I was most excited to interview the editor of “Trick ‘r Treat,” Robert Ivison. This movie has become a cult classic over the years, and is known for its complex plot structure. In our conversation, I learned a lot about how “Trick ‘r Treat” went from the version that was in the script to the version that wound up on the screen. It went through several structural changes, and that gave me a lot of comfort as a new anthology filmmaker. Even filmmaking veterans sometimes discover that they have to restructure their movie in the editing room.

Reader: Who do you feel your book will appeal to most? Who do you hope picks it up and what might they gain from it?

KH: This book is for horror fans and filmmakers alike. Horror fans will get behind the scenes from stories from a wide range of productions, like “Goosebumps”, “V/H/S” and tons more. Filmmakers will learn from the experts how to take their early short films and assemble them into a quality feature film.

Reader: Overall, between the movie and the book, it seems like you took a real journalistic approach yourself in putting these together. Was that the plan all along or did things just end up working out that way?

KH: That’s actually something I haven’t thought about until now, but it makes complete sense. I’ve spent most of my career working in local news. While I don’t consciously apply any journalistic standards to my horror projects, I shouldn’t be surprised if they feel a bit “newsy.” I love real stories experienced by real people. In “Gravedigger Dave,” that led me to interviewing Northlanders about legendary local hauntings. In “The Horror Anthology Handbook,” that led me to interviewing filmmakers about their work. I suppose it’s all in an effort to inform people while being entertaining at the same time. We have a ton to learn from the horror genre if we know where to look.

Reader: With the virus has there been any changes in submitting “Gravedigger Dave's Halfway House” to film festivals and the like that you feel you and others have missed out on?

KH: I am so lucky for the way things turned out in that regard. The movie premiered theatrically on March, 1, 2020 to a sold-out crowd. This was one of the last weekends in which a sold-out movie theater was an acceptable place to be, and my movie was the last movie I saw in theaters before the shutdown. It became available for streaming on Amazon in late March, which was always my intention, but I had no idea that everyone would be stuck at home with nothing to do besides watch movies. I wish I could say it was strategic planning, but it was just pure chance. I feel terrible for the filmmakers who missed out on theatrical and festival opportunities this year. I hope they’ve been able to pivot, either by releasing their work online or securing screenings for 2021.

Reader: Besides sitting beside a campfire, tell me some more background behind deciding to take on these projects. When did this path begin for you and what are some of your plans of hopes for the future?

KH: As a low-budget filmmaker, short films are the best way to hone your craft. They don’t take a lot of time and they typically don’t cost a lot of money. After having made several paranormal short films I began to take an interest in how they might fit together in a more expansive narrative. Once this interest took hold, I began watching a ton of anthology films and interviewing a ton of anthology filmmakers. It has become a passion of mine and I plan to continue making anthology films and writing nonfiction books about how other filmmakers have gone from making shorts to making features. I’d love to interview George Lucas about “THX 1138,” which started as a short film before being made into a feature. We’ll have to wait and see if he returns my call.

Reader: Is there anything else you'd like to mention on the book, film, and what you have going on?

KH: I’m so thankful for the local support for my projects. This is a great place to live for an independent artist and I certainly do not take it for granted. My next project is Gravedigger Dave’s Anthology Festival, for which I’m taking open submissions for short films that will be compiled into a feature length anthology. So far filmmakers from over 20 countries have submitted, and I’m very excited about how diverse this project will be.