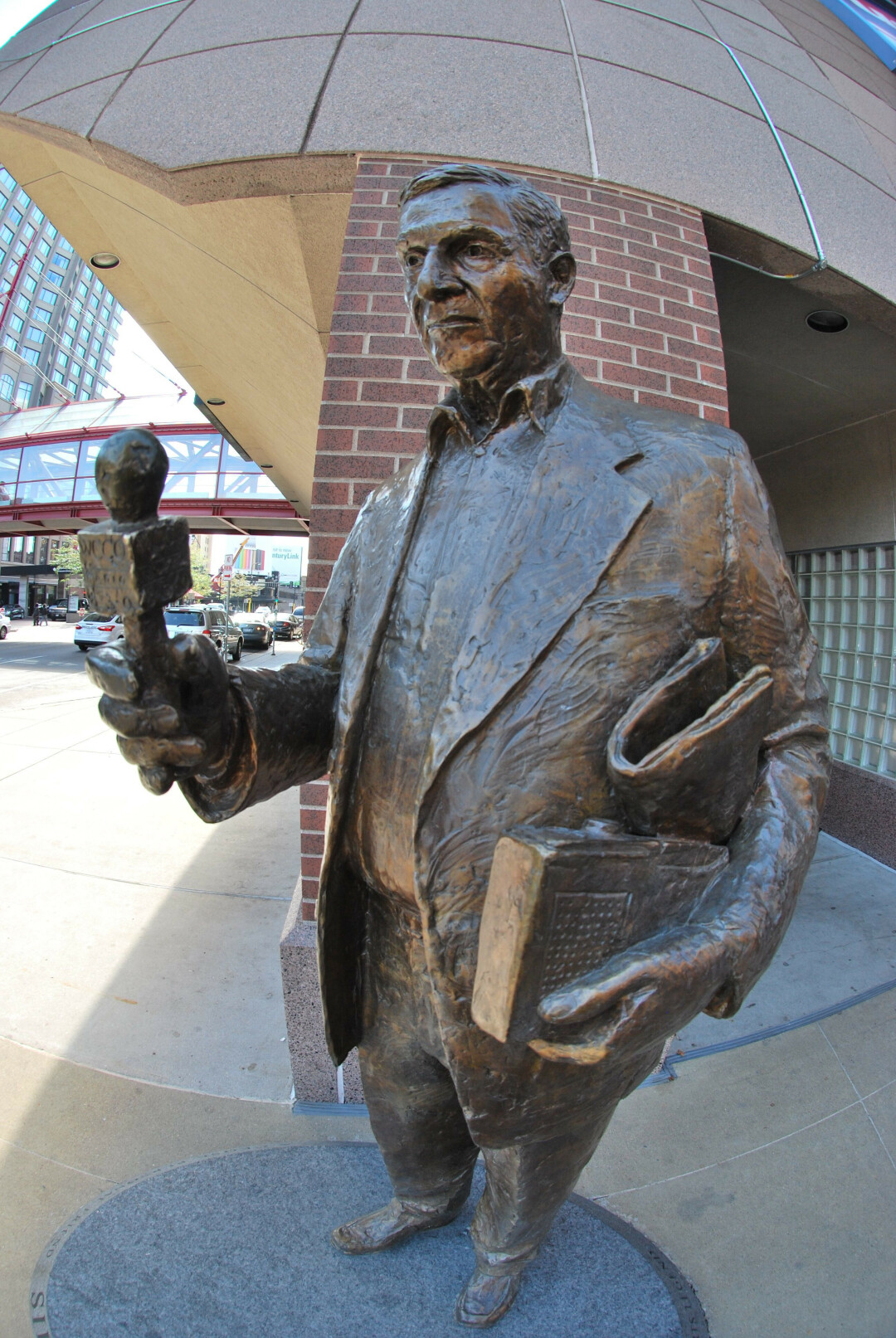 Bronze statue of Sid Hartman by the  Target Center, Minneapolis.

West Duluth ... It was around 1964 or so that I got my first paying job. It was delivering newspapers for the Minneapolis Star & Tribune. It was a very popular newspaper, even in St. Paul on West 7th Street, where I grew up. In a neighborhood full of apartments, I could drop 80 papers in the morning in about a half an hour and return home to sleep a little bit longer before going to school. Or I could stay up and get that final bit of homework leftover from the night before I didn’t quite finish. And it was a unique place to grow up.

For instance, my last stop of the day was at the grocery store-bakery across the street from where we lived. Based on a prior arrangement with the paperboy I took the route over from, I would order one extra paper per day. It was for the bakery. For my last stop, I’d go into the alley and pound on the solid back door twice. There was no doorknob on the door; only the hole leftover from where one would go. Someone would come to the back and say through that hole, is that you paperboy? At that point, the door would open only slightly, and I would hand off a folded-up paper, and a small white bakery bag with a couple of fresh goodies came back the other way.

In my three years of delivering papers, I never saw who was on the other side of that door. In three years of dropping papers every morning, I had some fantastic fresh baked goods with my daily breakfast. And from a financial standpoint, I’m sure I was coming out on the better end. I chuckle at some of the things I recall from my youth. My mom got me into going through the paper every day at four years of age. I wasn’t reading yet, but the “funny pages” made me smile. As I did learn to read, I read the paper every day, front to back. As I got older, I would sometimes go through up to 5 papers a day, obtaining out of town papers at magazine-newsstands. Those are becoming a thing of the past now.

And yes, I was reading Sid Hartman’s columns back then. They were a must if you wanted to know what was going on in the sports world. Even back then. The man has been known coast to coast for a great deal of his sports journalism career. Sid passed away earlier today at the age of 100. In a great tidbit about Sid, he was still working and writing for the Star Tribune. When I was a kid, the Tribune came out in the morning, and the Star came out in the evening. At various times, I delivered one or the other or both. I was an enterprising young lad. They eventually merged in the eighties.

I can’t remember if Sid wrote for one or the other or both. But I do remember reading a lot of Sid Hartman sports opinion growing up. In fact, if you loved sports as I did, it was a daily requirement to read Sid’s work. He knew everyone; he outworked every other writer in town and was usually the one who got the most “scoops.” You couldn’t not read Sid every day he was published. That was Twin Cities sports law.

He had a unique writing style. He’d write about the games but finish each column with some personal tidbits about his favorite local athletes. And he didn’t stop there. Over time he developed a lot of relationships with visiting star players and coaches. He wasn’t much into hockey, but Twins, Vikings, Gopher sports, and eventually, the Timberwolves were his favorites. But whether he preferred a sport or not, his sports celebrity Rolodex probably had more info in it than anyone else in the country in his business.

He didn’t like St. Paul too much. And some of his opinions regarding the business side of sports didn’t always align with mine. But the guy commanded the respect of subjects and readers alike. He had mine. When I lived in the Metro as a kid and young man, I went to tons of sports events. Through the courtesy of friends and others I knew, I could beat the crowds by entering through the media gates. I can’t recall ever going to anything without a Sid sighting. He had to be one of the, if not THE hardest working man in sports writing.

I’ve had a friend who lived into his upper nineties and had his mental faculties to the end. I had another friend who lived to be 102 and was exactly two weeks short of her 103rd birthday when she passed. She was as sharp as a tack. (Huge STL Cardinals fan too) Sid never faltered either. He was one of the fortunate ones. Not everyone possesses that great aging gene that allows one to be mentally on top of things right through to that moment they cross over that bridge. But Sid had it.

And I consider myself fortunate that he did. I can’t say that I’ve read every single Sid column over the years, but I’m confident I’ve read over half of his career work. He’s credited with 21,235 columns. That’s a lot of writing and a lot of reading. To remain sharp with mental clarity to the end would be a gift. Sid received that, and if his writing was a gift to his followers, I could only say that I’ve gotten a lot of them over all of these years. His departure saddens me and that, due to these times, he won’t get the sendoff he deserves. I’d bet anything the US Bank Stadium would fill up for a Sid Memorial service. To do something you truly love and get to do it all of your life is a blessing and a half. I’d say that Sid got double. Thank you, Sid. RIP.

JUMBO JOE THORNTON has signed with the Maple Leafs. Why? He is from the area, so I can see why he would want to do so. But at the age of 41, does Joe put the Leafs over? I don’t see it. But he was a half a point per game player last year. His experience and leadership qualities might be a positive to a team having problems getting over. But I’m just not feeling it. It’s the Leafs. Is Joe the missing piece?

THIS EVENING the LA Dodgers beat the ATL Braves to advance to the World Series to face the Tampa Bay Rays. After getting behind in the series three games to one, the Dodgers scrapped back to eke out a game seven victory. The Rays eliminated the Houston Astros in seven games for their berth in the Fall Classic. How do I see this series? I believe that the Dodgers have a more balanced overall roster than the Rays do. And that’s what will give them a series win. LA is a minus 210 Vegas odds favorite going in. It should be a great watch! PEACE