The fall of Lincoln 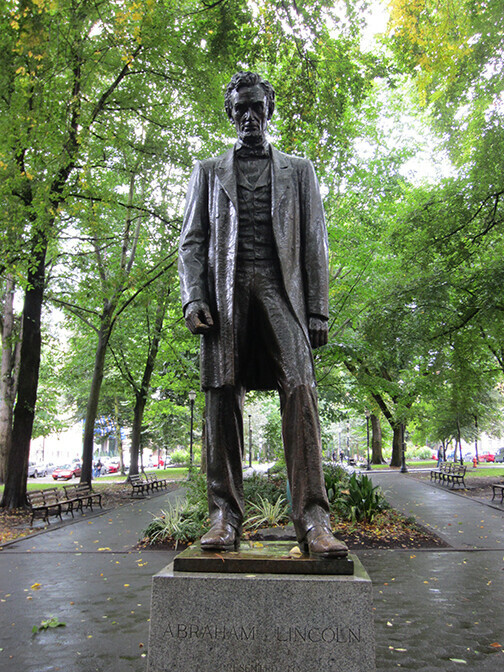 A week ago angry protesters knocked over statues of two of my favorite presidents on the day set aside by Congress to let Italians know they were finally considered white. Teddy Roosevelt and Abe Lincoln both suffered from a condition known as being human. They had no access Dr. Who’s tardis to teleport them into a gentler future to see the errors of our past. That said, it could be argued that Teddy imagined a future where the environment would be treasured and Abe saw a future where the words “all men (and women) are created equal” would be taken seriously.

The historian in me can forgive this trespass against my heroes. Pushing over a couple bronzes is hardly the end of the Republic. Our challenge might simply be to better learn the past so as to distinguish between slave owning traitors and our better angels.

I don’t feel nearly so charitable towards the Republican successors who abandoned their party’s founders. Republican Texas rewrote school text books to teach young Texans that it wasn’t slavery that sparked the Civil War but federal interference in the state’s economies. I’m sure Abe has been rolling in his grave ever since. The state’s 1861 “Declaration of Causes” explaining its secession defends slavery paragraph after paragraph including this charming run-on sentence: “…We hold as undeniable truths that the … various states … were established exclusively by the white race, for themselves and their posterity, that the African race … were rightly held and regarded as an inferior and dependent race ... ” And Texas Republicans delight in spreading their toxic history.

Because Texas buys every public schools text books they require textbook publishers to write Texas’s warped view into history books. Because all of the publishers salivate to make this huge sale they embed Texas claptrap into their textbooks for the entire nation to propagandize every American school child. Texas wants every American child to see the world the way Rush Limbaugh says it works.

Republicans began abandoning Lincoln in pursuit of the South just after I moved to Minnesota from Kansas in 1963 at age 13. The Civil War’s Centennial was in the news then as was Martin Luther King Jr. My new schoolmates called me “Reb” for my Kansas accent. The next year Arizona’s Republican Senator Barry Goldwater ran for President but only won the South’s electoral votes. He earned them by opposing the Civil Rights Act of 1964. My Republican parents voted Democrat for the first time in their lives. In 1968 Richard Nixon poached George Wallace (“segregation now, segregation tomorrow, segregation forever”) voters to win the Presidency. And in 1980 Ronald Reagan conspicuously announced his presidential campaign in Neshoba County where sixteen years earlier the college kids Chaney, Goodman and Schwerner were murdered for helping to register Mississippi’s black voters.

But Donald Trump trumped them all in his bid for the Republican Presidential nomination by jetting around the nation with his preposterous claim that President Obama was a Kenyan and not an American. In his bid to stay in office, he came to Bemidji, Minnesota a couple weeks ago and told an audience of Aryans that they had good genes unlike Minnesota’s Somali population. So much for the Preamble to the Declaration of Independence. AND that’s not the half of it. Trump has told us that he’s been a better president than Lincoln or George Washington. He also thinks he’s entitled to an unconstitutional third term. The Republican party of my youth would have demanded that Trump take a psych evaluation. Which leads me to the lap dog I challenged in the recent Republican primary, Congressman Pete Stauber.

There has been no daylight between Stauber and Donald Trump. Nowhere has that been more stark than on Republican Party’s calamitous handling of the corona virus. Three weeks short of the election Dr. Michael Osterholm, the director of the Center for Infectious Disease, has warned that: “the next six to 12 weeks are going to be the darkest of the entire pandemic.” Maskless Pete just flew into Duluth on Air Force One with President Trump’s infection tour.

The Republicans who saved the union would be dumbstruck by the divisions their southernized successors are sowing today. When I attended my first meeting in a short lived experiment to be a Democrat I was delighted that they made a big deal out of Abraham Lincoln. I trust them to tell our nation’s history to the angry youngsters who pushed Abe and Teddy over in Portland. And it makes it easy for me to throw my support to Quinn Nystrom for Congress. I’ll be one of her “RepubliQuinns”

The contrast with Pete is stark. Pete will help Donald Trump kill the Affordable Care Act. Quinn Nystrom organized bus trips to Canada to buy affordable and lifesaving insulin for diabetics like herself. Voting for Quinn is a life or death decision.

Harry Welty wrestles with his conscience and everything else at: lincolndemocrat.com