Christmas on the Lam and Other Songs From the Season 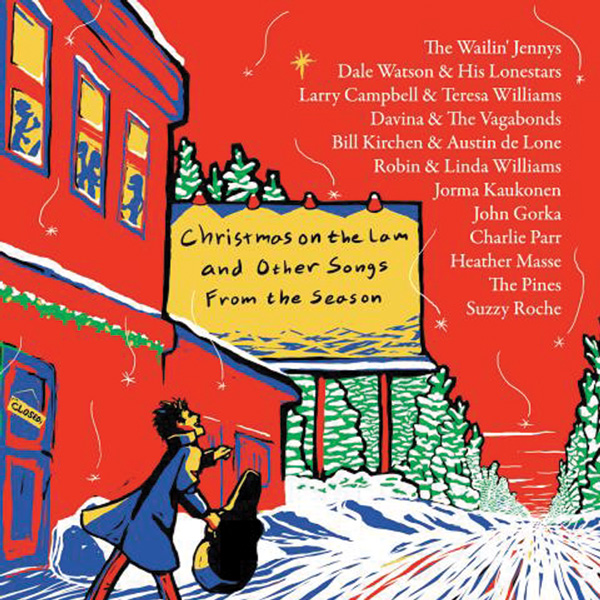 If the thought of adult contemporary Christmas songs from some excellent regional musicians sounds like something you might like, well, look no further than this seasonal compilation album from Red House Records out of Saint Paul. This album is mixed with some traditional covers and wintery originals. There are some familiar acts such as Charlie Parr, The Pines, and Davina & The Vagabonds as well as others such as The Wailin’ Jennys, Dale Watson & His Lonestars, Larry Campbell & Teresa Williams, Bill Kirchen & Austin de Lone, Robin & Linda Williams, Jorma, Kaukonen, John Gorka, Heather Masse, and Suzzy Roche.
As I mentioned in my last review of Sarah Krueger’s holiday album titled, Northern Air, I’m not really a huge fan of Christmas music, but like Krueger’s album, this material stays fresh and original.  The experience of the musicians makes this Christmas album a unique mix of songs.
The album begins with Davina & The Vagabonds with their take on the Elvis tune “Santa Bring My Baby Back to Me.” It’s an upbeat ragtime-esque rock/blues with a swinging piano and horn section.
The thing I like about this album is that while it stays pretty reserved (you can play it in front of the folks without any problem), there is some diversity between the songs. There are a few songs that stuck out to me. One would be “Hold Up Mason City,” by John Gorka. If anyone has done some winter driving, it is easy to relate to. Gorka’s description of driving through a blizzard on I-35 and taking some shelter. The final verse of the song is interesting, he stops into the “Big Bopper Diner” and sees Buddy Holly’s ghost. The reference to the fateful plane crash the took their lives in that area is clear.
I’m a big fan of The Pines and they do not disappoint with their thoughtful and beautiful take track on the Gordon Lightfoot classic “Song For A Winter’s Night.” The Pines definitely have their own take on folk and country, but Dale Watson and His Lonestars really switch things up with their more old school country take on a Christmas song titled “Christmas To Me.” It’s like if Waylon Jennings or Johnny Cash added a song to this compilation. I like it.
To take this neat mashup of holiday music even farther is Charlie Parr’s contribution with the song “Slim Tall’s Christmas on the Lam.” The familiar twangy slide of Parr’s guitar really drives through this folk tale Christmas tune.
So if you’re stuck with the family and if Christmas music is something they must listen to, I’d certainly suggest streaming or downloading this off of Red House Records website. The selection of covers stays off the beaten path of what the radio stations and stores play over and over again, and the originals feel like old forgotten classics. In a way all of the music on this compilation is timeless in a way. Christmas is going to be here and gone in a few days, so if you want to get it out of your system, this album is a good way to go. I might give this a listen again next holiday season and that’s saying something because as I said, I’m not the biggest fan of Christmas music, but this worked out well.