What Part of Never Again Does Mr. Trump Not Understand? 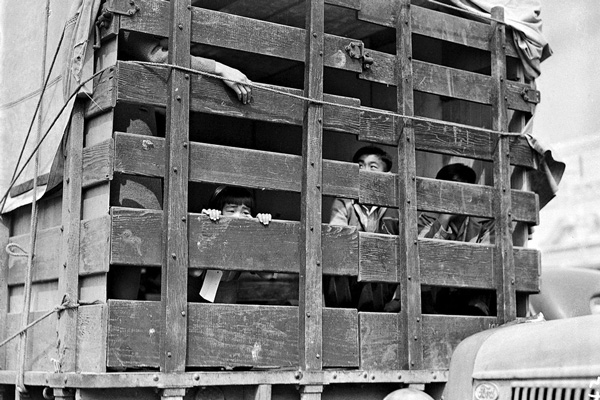 A truck packed with Japanese-American residents of San Pedro, California, leaves the city for a detention center on April 5, 1942.  Photo: Clem Albers

Asked last year whether he would require American Muslims to register in a database Donald Trump said he “would certainly implement that -- absolutely.”  During a Nov. 16 appearance on Megyn Kelly’s Fox News show, former Trump spokesman Carl Higbie said a registry of Muslims would be “legal” and that “We did it during World War II with the Japanese.”
“You’re not suggesting that we go back to Japanese internment camps are you?” Kelly asked. “I’m not proposing that at all,” Higbie said, “But I’m just saying there is precedent for it.” To this Kelly declared: “You can’t be citing Japanese internment camps as precedent for anything the president-elect is going to do.”
But of course he could, because Mr. Trump appears to win support by boastfully saying and doing anything that produces a roar from the mob -- crowing about sexual assault, torture, shooting people in the face, bombing civilians, deporting millions -- no matter how unlawful, bigoted, sexist, hateful or dishonest it sounds. 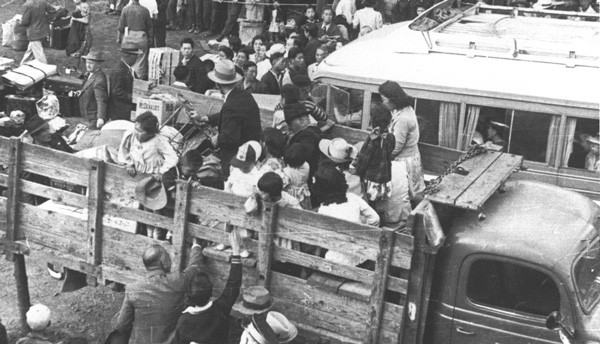 The so-called “precedent” includes the bitter irony that many imprisoned Japanese-Americans had sons in the military fighting against fascism in Germany and Italy. Muslim-Americans likewise have thousands of children in the US armed forces. Yet Khizr and Ghazala Kahn, the parents of Humayun Khan an Army Captain who died in a car bombing in Iraq in 2004, were viciously belittled by Trump, using the same bigotry with which he attacked Federal Judge Gonzalo Curiel, absurdly calling him “Mexican.”
News coverage of Higbie’s Muslim registry “precedent” balloon neglected to mention that arresting between 3 and 11 million undocumented immigrants (Trump calls this whole class “Mexicans”) would also require a mass police-state internment program like the WWII crimes visited upon Japanese-Americans. The media also ignored the fact that the US government has officially memorialized an apology for the WWII mass arrests and detentions, and has erected a monumental promise never to do any such a thing again.

“The Lessons Learned Must Remain As A Grave Reminder Of What We Must Not Allow To Happen Again To Any Group.”

The National Japanese American Memorial, in Washington, DC, pledges never to repeat this overtly racist chapter of American history. The national media’s ignorance or omission of this national monument is partly understandable. It’s not noted on any of the DC tour maps I consulted. The memorial is a permanent reminder of the shameful arrest and imprisonment-without-cause of over 120,000 Japanese-American civilians. What’s more, for a city like Washington, which is crowded with mostly self-congratulatory monuments, the internment memorial is a vanishingly rare, direct and unambiguous admission of wrongdoing by the government.
Inscribed in the memorial’s elegant marble pedestals are President Reagan’s words: “Here We Admit A Wrong. Here We Affirm Our commitment As A Nation To Equal Justice Under The Law.” Also carved in stone is this pledge from the late Senator Daniel Inouye of Hawaii: “The Lessons Learned Must Remain As A Grave Reminder Of What We Must Not Allow To Happen Again To Any Group.” In 1988, Reagan signed the Civil Liberties Act which apologizes on behalf of the government and declares that the mass arrests were based on “race prejudice, war hysteria, and a failure of political leadership.” This sounds familiar.
In The Underside of American History, historian Roger Daniels writes about early 1942 that: “Racist feelings were intensified by wild rumors of sabotage and espionage, and a variety of groups demanded the expulsion of Japanese-Americans from the West Coast.” The US Army and the War Relocation Authority forces then used house raids to detain and ship 120,313 Japanese-Americans to hastily-built, barbed wire-circled prison camps -- many built in the desert.
Today’s advocates of Trump’s “database of Muslim residents” should consult the 1983 federal commission on the mass detentions of World War II. It found there was “no military necessity for the mass imprisonment of the Japanese Americans and that a grave injustice had been done.”
The US started down this road immediately after Sept. 11, 2001, when over 2,000 people in the country were arrested in secret. The Justice Department refused then to issue a list of names or the number of those incarcerated, arguing that “national security interest” outweighed the public’s right to know. During these secret arrests, US Rep. John Conyers, D-Mich., visited the Krome detention center near Miami and found it astonishing that “...the Immigration and Naturalization Service is fixated on detaining and rounding up countless Arab-Americans without any justification.”
But Trump would rather we forget US history, ignore Reagan’s apology, and break Senator Inouye’s promise. Today’s wartime hysteria, fueled by Trump’s baseless accusations against immigrants, helps some ignore our history, especially if it is ugly, and consider repeating it even if we’ve promised “never again.”
-- The National Japanese American Memorial is two blocks north of the Capital on a triangle bounded by Louisiana Ave., New Jersey Ave., and D Street NW. See: www.njamf.com.