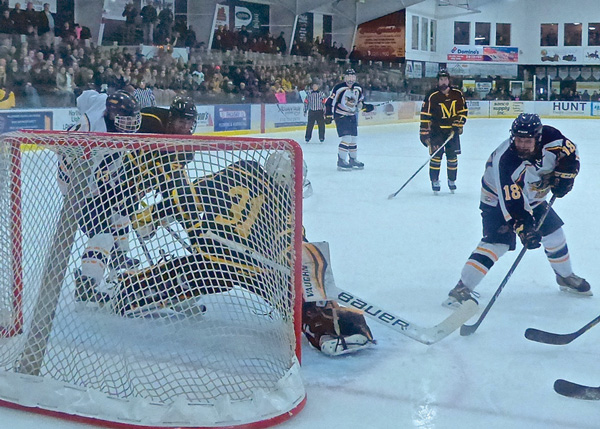 We all know that Minnesota is “The State of Hockey,” and it doesn’t take much effort to prove it. Just go to Heritage Center, when Duluth East is playing someone like Cloquet-Esko-Carlton, as they will on Thursday night in a big pre-Christmas test of Northern high school powers.

Or last week, you could look at Hermantown, the defending Class A champion, and Marshall, which boldly moved up from Class A to AA a couple years ago. Those are two schools with proud tradition and with enough hockey enthusiasm to have their own arenas. They have different philosophies on which division to play in, but they have the same objective when they face each other – win.

They met last week at Hermantown, with a regional television audience and a good crowd, and after Marshall broke a scoreless tie in the second period with a goal by area goal-scoring leader Levi Stauber, the Hawks came back to get a 1-1 tie on a screened goal by Dorian Gotz. 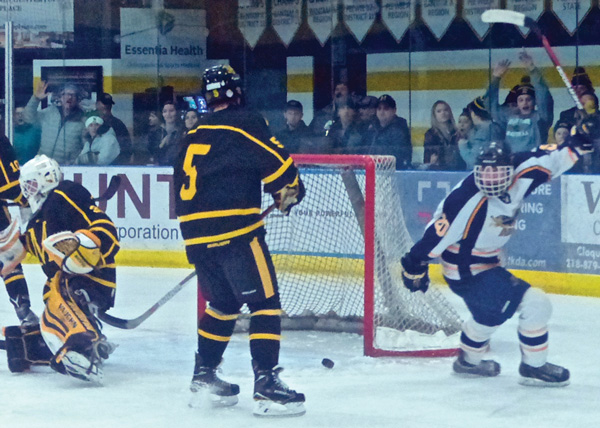 Hermantown's Dylan Kolquist broke into the Marshall zone just in time to pounce on a turnover and surprise goalie Cam Brandt with the 2-1 tie-breaking goal in the third period. Photo credit: John Gilbert

In the third period, Dylan Kolquist broke into the Marshall zone and got lucky. Marshall goaltender Cam Brandt went to clear the piuck, and a defenseman arrived to help out. The two both seemed to think the other would handle it, and they muffed it. The clearing attempt went right to Kolquist, and he scored at 6:29 of the third to break the 1-1 standoff.

Two minutes later, more indecision in the defensive zone resulted in a turnover and Jesse Jacques was happy to oblige, grabbing possession and feeding Ryan Sandelin, who scored the clinching goal in a 3-1 victory.

The pace was intense from start to finish, and the action was typical of two fierce rivals laying it all out there – Minnesota kids who grew up skating, giving everything for their high schools.

That’s what has made Minnesota hockey such a great entity. And if you go down to AMSOIL Arena Friday night, you’ll see the No. 1 ranked UMD Bulldogs facing Bemidji State, and both teams will have some standout players who grew up playing Minnesota hockey. 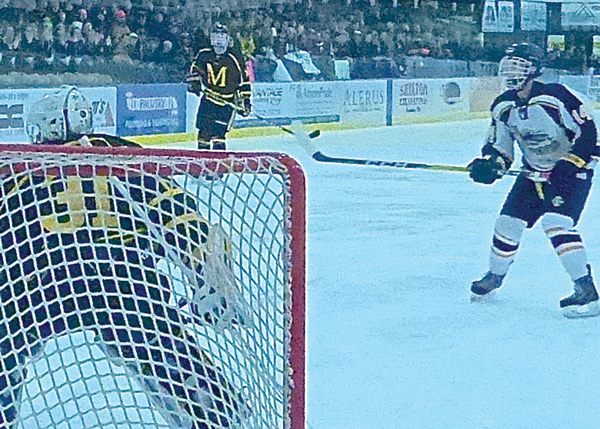 Darian Gotz lurked out in the slot for Hermantown, moments before he scored the Hawks first goal to tie Marshall 1-1 in the second period. Photo credit: John Gilbert

The Bulldogs were knocked off the No. 1 perch for 24 hours last weekend, when they lost 4-3 at No. 2 Denver, but they came back to win 3-1 Saturday night, which meant the ranking folks at College Hockey Online and the computer operators who do the Pairwise found it convenient to leave UMD No. 1 and Denver No. 2. Bemidji State, meanwhile, was startled by Lake Superior State, resulting in the Beavers dropping out of the Top 10. That won’t make it a problem for Tom Serratore to fire up his Beavers for the home-and-home series with UMD.

But amid all the usual, annual hoopla surrounding Minnesota’s love affair with hockey, maybe it’s time to also acknowledge another prize storehouse of athletic excellence in Minnesota – volleyball.

We’ve been consumed by UMD’s excellence, and we know how strong the Northern Sun Intercollegiate Conference is in Division II volleyball. The Bulldogs didn’t make it far in the NCAA this year, but Concordia of St. Paul did. The Golden Bears won the league, the league playoff, the regional, and last week they went to Sioux Falls and won the NCAA Division II tournament. Check Concordia’s roster, and you’ll find almost all Twin Cities players, with a few from outer-ring towns for seasoning.

Then comes the biggest stage in women’s volleyball – Division I. The University of Minnesota has a fantastic program, and this year’s team is on a roll like never before. Again, using primarily homestate players -- just like the Herb Brooks hockey Gophers when they won the school’s first three NCAA championships in the 1970s -- the Gophers stormed to victory in the Minneapolis regional.

The Gophers beat Missouri in four sets in the semifinals of the regional, to earn the right to face UCLA’s gifted Bruins in the final. It appeared the bubble was suddenly burstable, because UCLA scored on some off-speed tips and some slamming kills and took a 6-0 lead. As a volleyball viewer for a couple of decades, I’m aware of the momentum swings of high-level volleyball, and I started wondering if the Gophers wrote off Game 1, would they be able to counter in Game 2?

No need to worry. The Golden Gophers stalked back to sneak up and catch the Bruins, taking their first lead at 21-20, and winning 25-23. They followed up by winning 25-20 and 25-22 for an improbable three-set sweep to reach the NCAA final foursome at Columbus. On Thursday, Minnesota faces Stanford, another Pac-12 power, at 6 p.m., while Nebraska takes on  Texas at 8:30. The games will be on ESPN-2, and if you get a chance, tune it in. Nebraska, the defending champion, is No. 1 seed, and the Gophers are No. 2.

The Gophers have these amazingly fresh-faced gals who display the cool demeanor of elite athletes in any sport. It’s just that they’re “our” gals. If we could adopt Concordia in Division II, we certainly can adopt the Gophers in Division I. Look at Sarah Wilhite: She’s a tall, attractive young woman who was Big Ten player of the year, and MVP of the regional. She ended the UCLA match with the calm efficiency of an executioner, leaping high to reach her favorite above-the-net region, then hammered a kill that struck UCLA’s defenseless setter, almost knocking her out.

Wilhite had 31 kills in the two regional matches, and took over the UCLA match as soon as she and setter Samantha Seliger-Swenson, from Hopkins, got hooked up. There were other exceptional performances on the Gopher team, such as middle blocker Molly Lohman, from Mankato, who joined Wilhite and Seliger-Swenson on the all-regional tournament team. They didn’t even name senior twins Paige and Hannah Tapp, from Stewartville, Mn.

Let’s just say nobody played anything but exceptional. It’ll take more of that to win the NCAA title, but this Gopher team is capable.

Hmmm...How do you like the ring of it? “Minnesota, the State of Volleyball.”