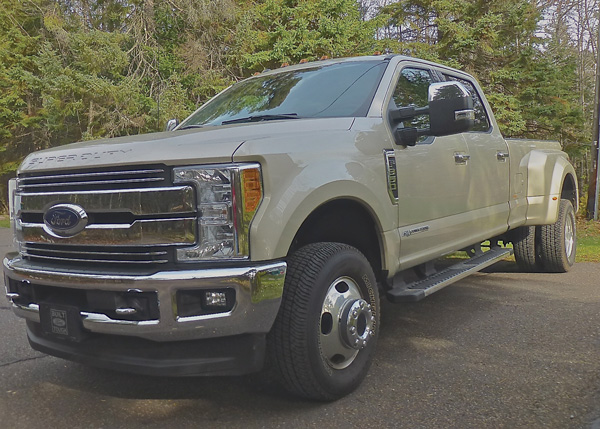 Driving a pickup truck is not much different than driving a car. You sit up higher, of course, but you stick the nose in between the lane lines on the highway and you cruise along.
That’s always been my theory about test-driving pickup trucks,  but I had never driven anything quite like the 2017 Ford F-350 Super Duty DRW 4x4 Crew Cab Lariat.
There I was, following my long-established rule of not being intimidated by the truck’s size, and I was on Interstate 35, just northeast of Duluth, heading in toward Duluth. I pointed the nose of the big Ford between the lines of the lane, and I cruised along, easily and with total confidence and assurance. And then an alarm went off, gently, but persistently. Then it quit.

Then it sounded again, and again.
Finally, I realized what it was – the lane-departure warning in the F-350. I wasn’t intending to be wandering across the dotted line into the adjacent lane, nor was I intending to wander across the outside line to the shoulder. I never even knew I did it, and it could only have been by an inch or two. I swear I never did put the front tires on or over the lines on either side, but it’s not enough to pay attention to the front end on the F-350. It’s also important to pay attention to where those rear tires are, because they don’t necessarily just following along obediently. 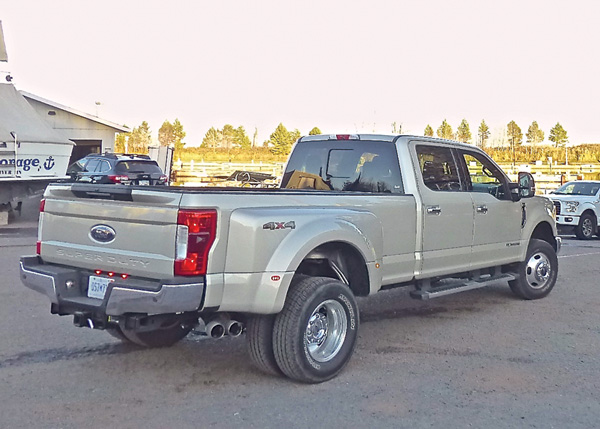 The F-350 Super Duty has big dual rear wheels – “dualies” – to give added stability and traction if you happen to be towing, say, a house. Or a small office building. Or a large Lake Superior going yacht. Those outer wheels stick out about an extra foot from the fuselage of the truck. And I use the word “fuselage” advisably. So while I might have been very efficient at keeping the front tires between the lines, but the outer rear tires of the dualies had minds of their own. It seemed as though if I made a two=inch meander up front, those rears would cross the line and set off the lane-departure alert.

Then it would come time to park. I occasionally park in a ramp, in downtown Duluth, and driving in, I found myself ducking inside the cab to make sure I made it under the bar, realizing how silly it was because my head would be low enough, even though my concern was justifiable about the warning lights atop the gigantic cab. But I made it. Fortunately, I always found a way to be alone when I got to an open parking space, because with nobody behind me, I could maneuver a couple of times to get absolutely perpendicular to the parking slot and center the big truck just right.

After a couple days, I realized it also would be beneficial to back into such 90-degree spots, because then I could pull out and be away without undue maneuvering. So I’d back in, very carefully, until I felt the tiniest bit of pressure on the rear bumper. There was a barrier of fencing, nice and flexible, rather than a concrete wall, so I could back up until I sensed that my rear bumper was pushing on the fence and I could stop – no harm, no mark.
As I returned to the F-350, I realized that I could see it from 100 yards away, because  the row of cars and small SUVs were all lined up in order, sort of like the Cloquet hockey team standing for the National Anthem. And then there would be the front tire, front fender, and bumper of my truck – protruding that far out into the driving lane. Fortunately, the next parker could see it just as easily and drive around this road-block-waiting-to-happen. 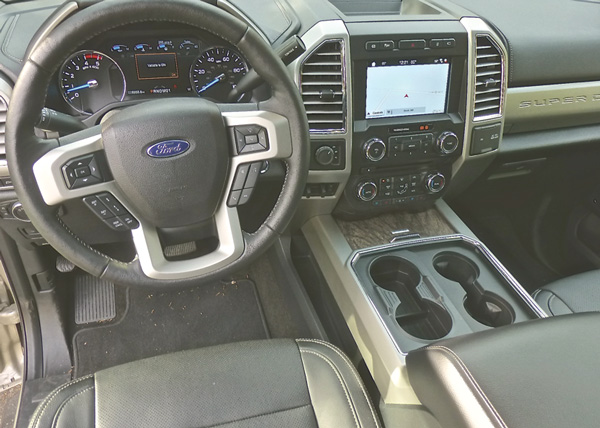 Yes, as trucks go, this is a monster. When I drove to a store and parked, I kept waiting for somebody to give me grief about having the audacity to drive such a humungous vehicle. But nobody ever did. Nobody ever complained about it. In fact, everybody seemed to love it!
I was parked at a shopping center, and a couple of other pickup drivers were just getting out of their trucks. They walked by, and we struck up a conversation. One of them said, “Now, that’s a truck!”  Similarly, at gas stations, hardware stores, drug stores, hockey games – wherever any other truck guys gathered – anyone with a comment had a favorable comment.
Base price on the F-350 Super Duty 4x4 Crew Cab Lariat was $53,485, and as tested it came to $73,665. Built in the Ford assembly plant in Louisville, Ky., the newly redesigned F-350 brings together all the design expertise Ford has displayed throughout its truck-building, starting with such breakthrough technology as the aluminum body over the high-strength steel frame of the F-150. In the F-350, weight isn’t as important as brute strength, and brute power, and it excels in both. 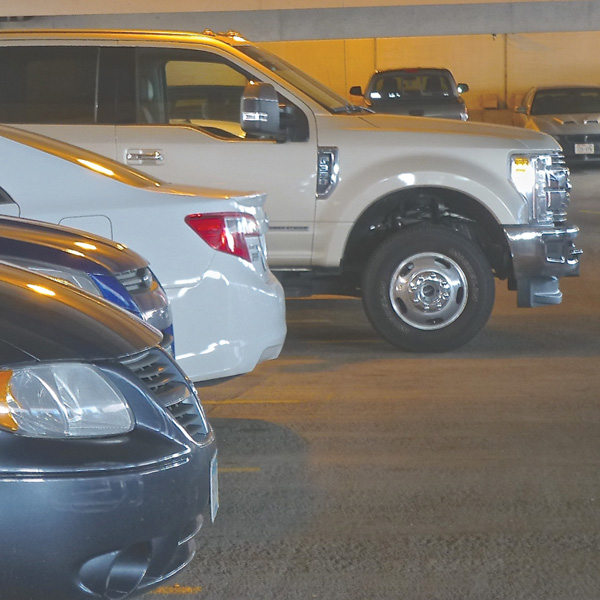 If you knew an NFL tackle, who was 6-6 and 350 pounds, it would be good for society in general if he had a mellow personality away from the gridiron, and it’s the same with the F-350 Super Duty. It is huge to look at, to park, to keep between the lanes, and to climb into, where you felt you’d have an advantage if you were given a pole and could pole vault into the cabin. Same with climbing out, or down, where a parachute might have been useful.
But for all its heft and power, it was a user-friendly vehicle to drive as far as precise control, handling, acceleration and braking were concerned. the view from the driver’s seat was impressive, and the cameras giving you views of all angles outside were a big help. The fact you could get 18-20 miles per gallon also was user-friendly. And it seems light on its feet with the capability of 0-60 acceleration in under 8 seconds. 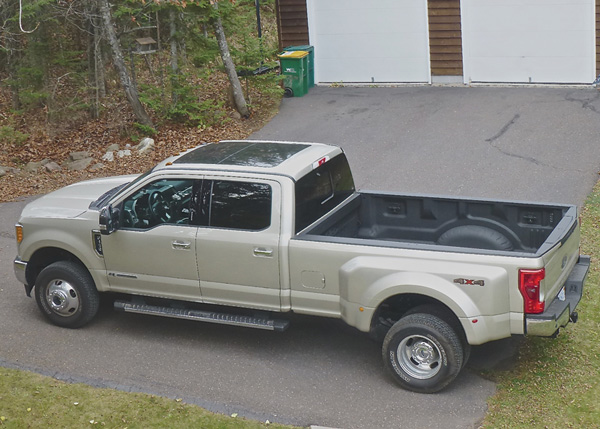 The cabin’s interior was superb. Nice materials, good ergonomics, roomy and useful cubicles and controls. Comfortable bucket seats, with room for three adults in the rear of the full crew cab. But when it comes to trucks, rarely does a person buy exactly the truck required to carry out garden work, light ranch or farm work, light trailer towing, etc. No, the trend among truck guys is that if a truck is good, a big truck is better, and the biggest, baddest truck in the neighborhood is worthy of great respect. This one wins.
The test F-350 Super Duty Crew Cab Lariat has a 6.7-liter Power Stroke V8 turbo diesel, with four valves per cylinder and a single VGT turbocharger, with a charged air cooler. It delivers 440 horsepower at 2,800 RPMs, and -- brace yourself -- 925 foot-pounds of torque from 1,800 to 2,000 RPMs. With 4.10 rear axle ratio gears, and 245/75 17-inch OWL all-terrain tires, the test truck was equipped for a 5,331 pound payload, and a 21,000 pound trailer towing capacity. It also was equipped for gooseneck towing of 31,000 pounds.
To live up to its formidable reputation, the test truck has a curb weight of 8,643 pounds.
The ease of driving the big Ford was aided by the fact that the Power Stroke diesel is remarkably quiet. You can carry on a normal conversation, or listen to something on the audio system, without concern about intruding noise, even while under load and acceleration going up a hill.

The heavy-duty 6-speed transmission shifted smoothly at all times and was another method of controlling and regulating so much power and refining it into an everyday smoothness for when you don’t happen to be hauling a house trailer. But there can be no mistake. Anyone wanting a truck like the F-350 Super Duty is not being frivolous and just trying to have the biggest, baddest truck in the neighborhood. You buy this truck, it’s because you genuinely need all that it can achieve. 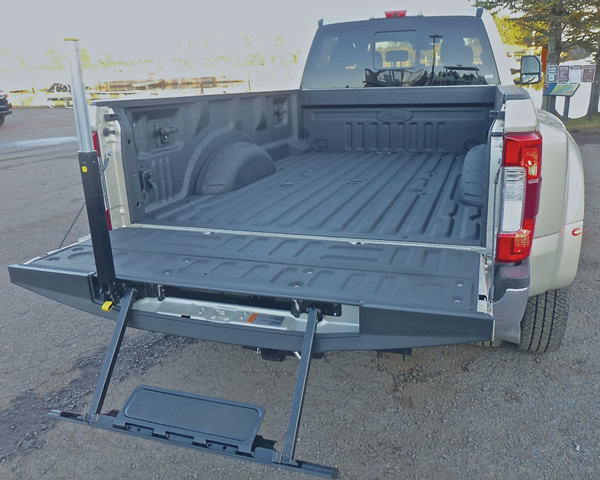 Highly useful fold-down step with upright support aids getting up and down from huge bed with its factory bedliner. Photo credit: John Gilbert

It does, of course, seem contradictory to load up a big workaholic truck with contemporary creature features, but the F-350 doesn’t shy away. Quad beam LED headlights, LED side-mirror spotlights, high-intensity LED security approach lamps, and automatic high beams that dim when a car approaches, and rain-sensing wipers are all included. Rearview camera, lane departure warning (as mentioned), 8-inch LCD productivity screen with menus for gauge, trip computer, fuel economy and towing or off-road information, plus 110-volt, 400-watt outlets, one in the dash and one in the rear seat console, dual-zone heat/air-conditioning controls, and a full-length panoramic sunroof that seems more suitable to a luxury sedan, all combine to make the F-350 Super Duty a pleasant place to spend time. And the surround camera arrangement allows the driver to make sure nothing is in the way of this big beast from any direction, and it also allows cross-traffic detection for a trailer. That seems too magical to be true.

The assets of all Ford pickups, from the F-150 on up, remain features on the big F-350. For example, when you drop the tailgate, which can be done remotely from inside, it falls softly. Now to load or unload, you face the Olympic high-jump challenge. Or, not. Pull a handle on the top of the tailgate, an extension appears that folds down and becomes a one-step ladder, perfectly placed for climbing aboard. And a bar magically appears, with an over-built rod that folds upward and extends straight up as a sturdy brace hand grip so you can pull yourself up and let yourself back down.

Just basic, simple, hard-core useful features, over and above the keyless-entry, push-button start, electronic connectivity and all the other creature features in the simple-luxury cabin. One word of advice, though. While getting used to the auto-dimming mirrors and all the fancy high-tech stuff, learn quickly to identify that lane-departure warning alert if you intend to drive on any roadways with lanes!