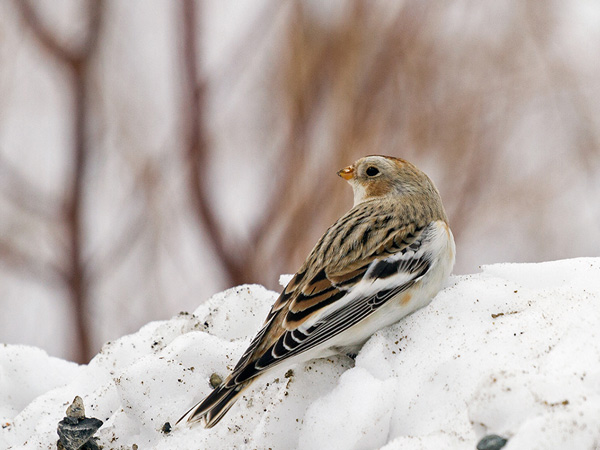 Light snow traces the complex network of twigs in the forest, and we can imagine an even more intricate web of roots and fungi living below the surface. Photo by Emily Stone.

Big, fluffy, wonderful snowflakes swirled around my head and the stiff breeze sent icy fingers down my neck. Slamming the car door against the storm, I started the engine and wished the temperature gauge would rise above cold so I could turn on some warmth. My cross country skis were rattling around behind me—ready, but unused—so I was ecstatic about this storm, but the cold was still a shock to my system.

Rolling along the highway at a relaxed, “get-there-safely” pace, I enjoyed the scenery’s face lift. Drab, brown fields have been transformed, and the forests are delightfully frosted. Tawny, dried weeds and their dusky shadows painted texture on the roadside border, which gave way to glittering fields of smooth white. Suddenly, those colors came alive in a cloud of swirling beauty. Brilliant white, sharp black, brown, and blur; the flock of snow buntings ascended, swooped as if tossed by blizzard winds, and flashed their colors in unison as I passed.

These tough little visitors from the Arctic live up to their nickname of “snowflake birds.” They nest on tundra all around the top of the globe, and are the most northerly recorded songbird in the world. In fact, one scientist claims that “Under the current climate conditions of the Arctic, there is no northern range limit for snow buntings.” There is a southern limit to their range, though, since a certain amount of daylight is essential to their reproductive success. They also require the average temperature in July to stay below 50 degrees F. That may sound unpleasant to you, but it comes with midnight sun, a warm down jacket, and the stark beauty of places like Ellesmere Island, Greenland, Norway, and Siberia.

In winter, some snow buntings (especially females) head as far south as Iowa or Utah, but some (especially males) migrate only as far as northern Canada. Moderate cold isn’t an issue. They can survive in temperatures down to -40 degrees F. Only when it gets down to -58 degrees F does their body temperature start to plummet. The solution? Dive into a nice, warm snowdrift. The insulating power of snow helps preserve their body heat and keep out the wind.

My toes get cold just thinking about it, but feathered feet allow snow buntings to spend most of their winter strutting about on the chilly drifts. They usually feed in big, gregarious flocks that seem to roll along chaotically as the birds in the back make short, fluttering flight to the front. Occasionally, the whole group will rise and fall in a flurry of motion at the suspicion and passing of danger. Feeding flocks are entertaining to watch, since these birds don’t submit to a defined hierarchy like chickadees do, and end up bickering continuously over seeds and space.

Deep snows cover up the seed heads of short tundra plants in their breeding territory, but here in Wisconsin, snowplows expose seeds in the gravel shoulder, and windswept fields of nodding stems offer good foraging, too. I was particularly happy to read that they eat seeds of the ragweed plant, which is a major cause of seasonal allergies!

Naturalist John Burroughs wrote that snow buntings have “plumage copied from the fields where the drifts hide all but the tops of the tallest weeds, large spaces of pure white touched here and there with black and gray and brown.” But some colors are only temporary, and are confined to just the tips of feathers. All winter, the male rubs his feathers on the snow, wearing off the brown tips and revealing his dapper white and jet black courting suit by the time breeding begins.

This is an odd way to get dressed, for sure, but it saves valuable energy that would be spent on the usual second molt. And energy is at a premium in spring. Snow buntings must gain at least 30% more body mass before beginning their northerly migration, and individuals without adequate energy storage don’t seem to be able to “select seasonally appropriate directions during their migration.” In other words, skinny birds can’t find their way home. Perhaps this keeps them in warmer regions until they have gained enough strength to migrate.

The ones that do head north fly at night and use the geomagnetic field of the Earth almost exclusively for wayfinding. Visual clues are of little use to them in the blank, white of the tundra. Males arrive on their breeding territories in early April, when temperatures can still drop to -22 degrees F. They have to arrive early to secure a good territory, since the cracks and cavities in rocks where they nest are a finite resource. Females, sensibly, arrive six weeks later. He woos her by singing fast and often—a signal that he is an efficient forager and has ample free time for lovesick serenades. That’s important, because she must incubate the eggs almost continuously to keep them warm in the cold rocks, and relies on a fast-foraging male to feed her during that period.

The breeding season is a long way off, but today it feels like the snow buntings have brought the tundra south with them. I would agree with John Burroughs, who described them as “the only one of our winter birds that really seems a part of winter, that seems to be born of the whirling snow, and to be happiest when storms drive thickest and coldest…”
Arriving at the trailhead, I emerged into the swirling flakes, clicked into my skis, and attempted to embody the spirit of our tough, adaptable snowflake birds.