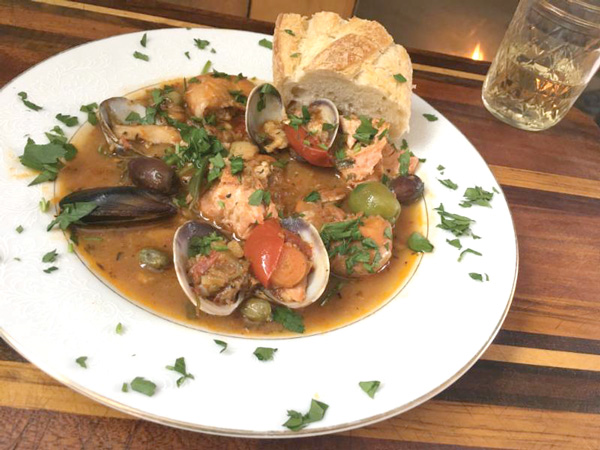 The Feast of Seven Fishes is a popular Italian-American way of celebrating Christmas Eve. It isn’t entirely clear how the number seven was arrived upon, or what it means. Many families celebrate with more or fewer fishes, and originally it was likely to have been just one. The tradition’s origins are in La Vigilia, or The Vigil, a southern Italian fasting day that was observed on Christmas Eve as they awaited the midnight birth of baby Jesus.
The celebrants couldn’t eat meat because they were fasting, which at the time meant they couldn’t eat mammal meat. So they often ate baccalà, or salted cod, a peasant dish that was a nod to the regions humble roots. Feast of Seven Fishes, in other words, is a fancy way of saying “fish for dinner” on Christmas Eve.

Today, typical fish dishes for the event include cod cakes, oyster shooters, clam linguini, fried calamari, stuffed lobster, and many other popular Italian-American dishes. Some chefs venture further from traditional Italian-American. Halibut with anchovy sauce, cedar plank salmon, ceviche, fish sticks and whatnot.
Seems like a lot of trouble to me, considering I only need about 20 minutes to whip up a batch of my signature seafood stew, which I call Soup of Seven Fishes.
It’s based on cioppino, the Italian-American seafood stew from San Francisco but rooted in Italy, and consists of an assortment of fish and shellfish simmered in a tomato and wine-based broth. Cioppino is thought to have evolved from ciuppin, a dish from Genoa, Italy. Ciuppin, similarly, is made of whatever the fishermen bring home.

Like San Francisco, Genoa is a hilly city above a bay, nurtured by a humid, Mediterranean climate-the original Mediterranean climate. There is similar feel to both cities, despite being halfway around the world from each other. In addition to the topography, both have large Italian populations. Simply being in Genoa, like San Fran, makes one want to sip wine or espresso, depending on the hour, in some well-positioned vantage point, watching the action.
Like the San Francisco version, my cioppino recipe is rooted in Genoa as well.
It began when I turned down free sandwiches at the bar where I was poaching a WiFi signal. I would be eating significantly above my economic class that night, but with less than two days on the Italian coast, I was fasting. A fish fast.
After MapQwesting my destination I drove into the outskirts of town, in the worst rains the region had seen in a decade. Finally, I found La Casa dei Capitani, aka The Captain’s House, at the edge of a violent sea.

Thank god the courses were small. Lobster on escarole with browned garlic; raw shrimp-buttery, gamey guts and all; baked mackerel with marinated red onion and soft peppercorns; cold smoked salmon on oiled cabbage with chervil; lampuga tartare that, my server admitted sheepishly, contained soy and wasabi; baby clams in chickpea puree; bonito with red grapefruit and fresh thyme on pickled fennel. I had my seven fishes and then some, and it was splendid to enjoy the work of such talented chefs with such remarkable ingredients at their disposal. But the most satisfying dish I ate might have been a simple bowl of red fish broth.
It was thick with fish debris, as if ladled from a pot that was nearly empty. The flavor was complex with herbs and seasonings, yet subtle, and very richly fishy. The fact that it was the cheapest thing on the menu seasoned it even more.
As far as I can tell, the seasonings and general ingredient profile in that soup were similar to many cioppinos I’ve known. Chunky seafood in a tomato and wine broth and butter with garlic, onions and herbs.

Catch of the day principles apply, as well as catch-what-catch-can in the freezer. If I use cod or other flaky fish, frozen is actually preferable to fresh. I shoot for seven fishes, including shellfishes.

Start with a mix of olive oil and butter, on medium heat. I add my frozen flaky fish and let it gently sizzle, hopefully forming a light crust that might hold the fish together later on. Might.
While that sputters, I add minced onion and garlic to to the oil around the fish. For a seasonal twist, I also add sliced celery root, carrot slices, and cauliflower florets.
Then, I add other fishes that might be frozen, like shrimp or crab or scallops. Then other shellfish like clams and mussels.
Somewhere in there, I add a bay leaf, and some thyme or Italian seasonings or Herbs de Provence. And tomatoes, either fresh, or, ideally, some well-preserved tomato product from summer. I use my oven roasted salted tomato sauce, but paste or canned tomatoes work great. Add a tablespoon or two of paprika or mild chile powder, or red chile flakes. I also like to toss in a handful of olives, and a tablespoon or two of capers. If it’s not fishy enough for you, add a tablespoon or two of anchovy paste.

At this point you will not have stirred it once.
If at any time you smell browning on the pan’s bottom, deglaze with white wine or sherry. Squeeze in a lemon, or lime, if you got it.
Many more fishes could be used as well, including anchovies, halibut, king crab, salmon collars, sea urchin, barnacles stuck to the mussel shells. The more the merrier, as diversity adds complexity to the broth.
As it simmers, wash a bunch of parsley, chop off the stems, and mince, in preparation to garnish.

Stir it one time. Really well, and serve.
Even if you’re a gluten-sensitive low-carber, do yourself a favor and serve with a piece of bread, preferably a crusty hunk of sourdough.
Put a shell bowl in the center of the table, and make sure everyone has plenty of napkins. Imagine yourself in some weathered seafood stall near the Mediterranean shore, watching the sailors, whores, poets, cargo and seagulls. Imagine yourself drinking wine and sucking the cod pieces out of bivalve shells, spitting shrimp peels onto the street, and sopping every drop of buttery broth with a hunk of ciabatta.
You know, fasting.