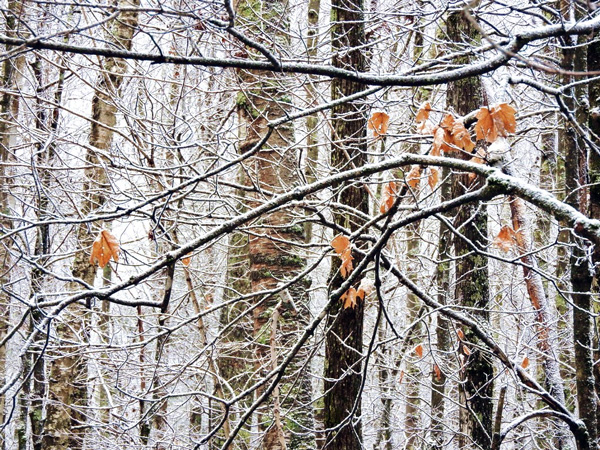 Light snow traces the complex network of twigs in the forest, and we can imagine an even more intricate web of roots and fungi living below the surface. Photo by Emily Stone.

Winter is coming in fits and starts. Last week, a thick, white blanket of snow separated each stoic tree trunk. Then it melted. This morning, a thin frosting of damp flakes swirled out of the sky, outlining every feature of the forest floor, highlighting the trunks and tracing the twigs. The intricate patterns, thus revealed, give us just a glimpse of the complexity that lies beneath. Yes, the roots of the trees ramble widely, and fuse with relatives to form a Wood Wide Web that shares resources, but the connections don’t stop there.
Fungi pick up where the roots leave off. Most tiny root tips are colonized by filaments of fungi, which extend the plants’ reach into the surrounding soil. Each tree species can host multiple types of fungi, and each fungus can colonize a variety of plant species. This expands the network beyond the species-specific root grafting, and creates a mycorrhizal (myco=fungus; riza=root) network that is robust and thickly woven. So thickly, in fact, that scientists say you could find seven miles of fungal hyphae in a pinch of dirt, and hundreds of miles under a single footstep.

When Dr. Suzanne Simard (a forest ecologist from the University of British Columbia who coined the term “wood wide web”) used DNA to identify all the individual trees and fungal strains in a forest plot, she ended up with a diagram resembling the airline route map in your seat back pocket. Some trees are major hubs. They connect (through the mycorrhizal network) to other hub trees, as well as younger, more isolated trees. This pattern is incredibly efficient. The two most distant trees in her study plot only needed two “flights” to connect, and the maximum path length the researchers discovered required only three “flights.”
(Scientists call this the “small world property,” I call it the “Six Degrees of Kevin Bacon.” In 1994, Footloose actor Kevin Bacon made an offhand comment that he had worked with everybody in Hollywood or someone who had worked with them. Three college students took the challenge, and started seeing if they could link any actor to Kevin Bacon through no more than six connections, where two actors are connected if they have appeared in a movie or commercial together. Google can now do this for you, if you type “Bacon number” and then and actor’s name. As you might have noticed, the trees are even better connected than Kevin Bacon.)
The complexity and redundancy of this Wood Wide Web creates resiliency. If one hub dies or is cut, the “flights” can simply reroute through a different hub. But why does the network matter at all?

Trees and mycorrhizal fungi live in an incredible symbiosis. Trees feed the fungi sugars produced during photosynthesis, and may share up to 80% of their total production. In return, fungal hyphae increase the absorbing area of roots from 10 to 1000 times. This protects trees against drought by contributing to water uptake and storage. Fungi don’t just absorb nutrients; they actively break down tightly bound soil nutrients like phosphorous and iron and make them available to plants. Some fungi even recycle nitrogen from soil nematodes into their plant hosts. Fungi and trees feed each other, and the intricate web captures and holds nutrients before they can be lost from the system.

The benefits aren’t just food related. The sheath that a fungus forms around a root creates a physical barrier against diseases. Meanwhile, it is diverting heavy metals and excreting antibiotics designed to kill pathogens. At a community level, the fungi act like fiber optic cables. Using warning chemicals and electrical impulses, they help trees share information about insects, drought, and other threats, so that currently unaffected trees can prepare their defenses in advance of an invasion.
What’s more, the mycorrhizal fungi can facilitate nutrient sharing between trees and plants of different species. Dr. Suzanne Simard traced the flow of radioactive carbon 14 from birch to Douglas-fir trees. After only an hour, she found evidence that birches had incorporated the carbon 14 into sugars during photosynthesis, and then shared it with nearby firs (which had been shaded for the experiment). Later, after leaf-off, she found that the evergreen firs were providing sugars to the twiggy birches.

Why would the fungi benefit from distributing resources to trees in need? Their existence depends on the presence of a mature, stable forest with its humid microclimate and flow of nutrients. Tree diversity is essential, since monocultures are vulnerable to disease and disturbance. Therefore, the fungi may share resources in an effort to maintain diversity in the forest and ensure the long-term stability of the environment they enjoy. A diversity of fungi is also important, since different fungi provide different benefits to their hosts and thrive in different situations.
The Wood Wide Web, with all of its natural connections, is beautiful from many angles. Perhaps our society could do worse than trying to emulate a system that has kept forests thriving on Earth for many millennia.