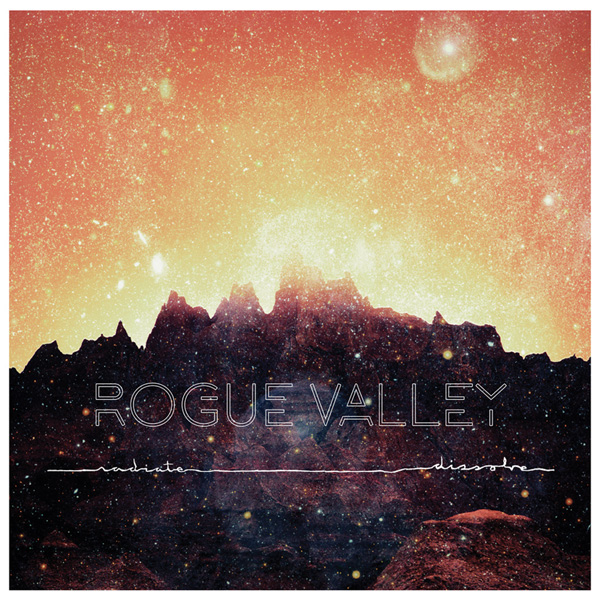 It’s been a couple of weeks since last doing a CD review. The election issues weren’t exactly the best experience ever and I don’t have a whole lot of CDs stacking up at the moment. It took a little while to find a CD on the desk that I haven’t reviewed, but I was happy to find the late July release from a band called Rogue Valley titled “Radiate-Dissolve.”
I have to say that there a few names surrounding this band that I’ve seen play up in this area, but have especially popped up at venues in the Twin Cities. First off, if you haven’t heard of Chris Koza, try to remember that name. Koza has definitely reached that point he seems to be known regionally among those who might follow music up here. It also seems that he has moved up to even being worthy of international recognition. Why would I say that? Well, Rogue Valley is touring overseas at the moment and people seem to like them a lot wherever they go. As far as I know they haven’t bothered playing the Duluth area, but I’m fairly sure Koza has played a few shows up here and wouldn’t doubt that other members in the band have made their way up here in various projects.
I typically end off a write up with where an album was recorded, but I figure I’d switch things around with mentioning that this album was recorded at a studio called Humans Win! by Lance Conrad. I have to say that the engineering and production of this album is really well done. I took a look at their Facebook site and was rather impressed by the amount of acts they have connected with. With the likes of: Actual Wolf, Caroline Smith and the Goodnight Sleeps, Haley Bonar, Hippo Campus, Heiruspecs, Lizzo, and Rachel Kilgour—that’s not too bad for a few names out of lengthy list in my book.
This album took a few listens to grow on me. It’s fairly mellow, and it might take one’s full attention to get into it, but once that happens, it really is a gorgeous listening experience. It catches that sense of having driving melody lines with a refined pop drive that carries a feel of Americana that’s just been warped into something entirely different. It’s kind of like if Mumford and Sons teamed up with   Frou Frou and did some weird contemporary Western musical that was accompanied by the horn section of a Mariachi band, that, and if it were all happening at a jam band festival. I’m sorry if people disagree with that, but that seems to get close to what’s happening here. It’s like the best parts out of all of those things. Other acts this album reminded me of was Paul Simon (for some reason, I’m pretty sure it was the harmonies), also, the Minnesota group, The Great Depression, and their last album recorded at Pachyderm Studios. I was actually somewhat shocked to see that I couldn’t find an immediate connection between Rogue Valley and The Great Depression because I really got a similar feel from both albums and they both hail from the Twin Cities area.
I feel the need to briefly provide some examples with the above statements. Yes, I’ll go ahead and start with the opening track, “The Brightest Stars.” It really is a display of modern Country-Western music. I think Americana is close, but it’s really the bouncing tempo that has that Western feel. The guitars are always twangy, the pedal steel drives behind the mix, the horns give it a little bit of an over the top feel, then you have Koza singing and it’s like Muse, but a little less dramatic, but still, pretty dramatic at times.
If you shuffle a few songs in, there is the song “Breathe.” It’s pretty much a hippy song with strong hooks. If someone were looking for prime example of a jam band guitar lead, right before the two minute mark, there you go.
I know I mentioned Frou Frou, well, the track “Blood Moon” has a very modern fusion of Western and light pop. Linnea Mohn takes on some primary vocal duties as well as keys on the album. I find the switch up refreshing and her harmonies with Koza keep things interesting. The layering of vocals on the album is laid out brilliantly at times.
The true winners on this album are Matthew Darling on trombone and Stephen Kung on trumpet. They create tremendous transitions when they aren’t somehow holding down this album’s flow subtly.
If this band ever plays up here, I definitely want to see this material played live. It pulls from many genres, yet maintains something that is pure. Familiar and pushing some boundaries at the same time. I have a hard time placing what they have done here in any one thing specifically, and that’s part of the reason why it’s good.