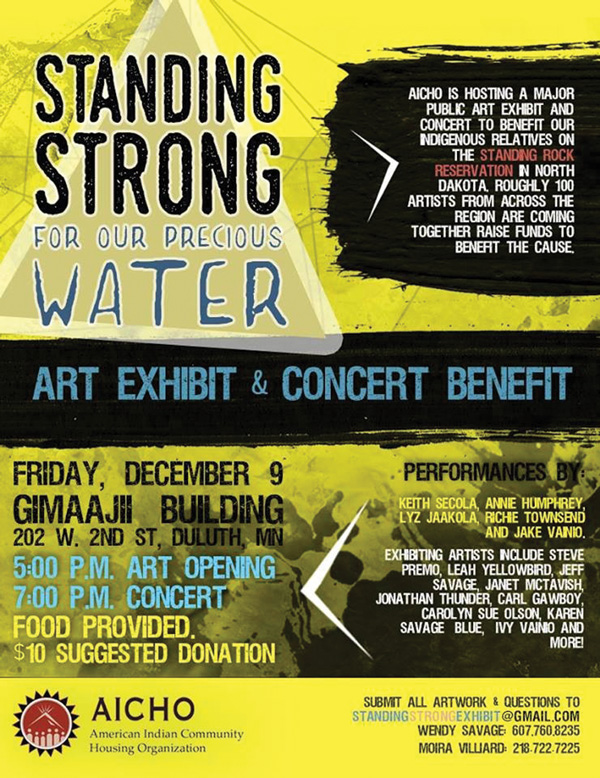 On Friday, December 9, 2016, roughly 100 artists from across the region are coming together raise funds to benefit the Standing Rock Sioux Reservation in North Dakota. The event, titled Standing Strong for Our Precious Water, will be hosted by the American Indian Community Housing Organization (AICHO) in the American Indian Center, located at 202 W. 2nd Street in Duluth, MN. It will begin with the public art opening at 5:00 pm, followed by a concert featuring performances by musicians Keith Secola, Annie Humphrey, Lyz Jaakola, Richie Townsend, Jake Vainio and others at 7:00 pm. The call for artwork related to the #NoDAPL Movement, Standing Rock, or the sacredness of water will be open until December 1. AICHO plans to open up its entire building to accommodate the show, including its two small art galleries as well as Trepanier Hall. The event is open to the public and there is a suggested $10 donation to attend; a light, traditional meal will be provided.

For the first time in over 200 years, all the native tribes in the United States have come together, standing strong with the Standing Rock reservation in North Dakota and advocating on behalf of human rights and the safety and sacredness of our shared water supply. Aside from motivating thousands of people to camp on site and march in solidarity with the water protectors, the movement to resist the Dakota Access Pipeline has also been a source of inspiration for artists across Indian Country. AICHO works closely with many of these indigenous artists to integrate art into the healing process for American Indian families who’ve been impacted with homelessness; hosting such a culturally relevant and important exhibit in the Gimaajii building seemed to be a natural fit.

The idea started during a conversation between quilter Janet McTavish and AICHO Cultural Program Coordinator and artist Moira Villiard. They were brainstorming ideas for a large-scale art quilt inspired by Standing Rock when Villiard decided to invite McTavish to one of AICHO’s regular artists’ meetings. There, it was decided that a Standing Rock benefit and art exhibition be hosted at AICHO so other artwork inspired by the movement could be displayed. McTavish has since designed a quilt using her signature collage style to composite images of Standing Rock, North Dakota, into one master image.  This beautiful, large-scale quilt will be the focal point of the exhibition, including images taken by a variety of individuals in our community who have traveled west to advocate for the safety of our water. Other highlights include artworks by Jeff Savage, Steve Premo, Karen Savage-Blue, Carolyn Sue Olson, Ivy Vainio, Jonathan Thunder, Martin DeWitt, Leah Yellowbird, Carl Gawboy, and other noteworthy artists will also be contributing.

“A spotlight must be focused upon the continued industrial pollution, of the finite resource that gives all life its sustainability,” says painter Steve Premo. “The Standing Strong for Our Precious Water show will lend a hand to do just that. AICHO’s central location and relationships with the area’s artists and in particular, native artists, make it a perfect venue to give vastly needed ground swell support for the growing movement to ‘Love Water’.”

Major icons in the world of established indigenous art have utilized the American Indian Center as a venue for exhibitions and workshops. AICHO’s arts program has successfully been hosting exhibitions since its official launch a few years ago; they average between 150-400 people in attendance on opening nights alone, and those numbers have been steadily increasing. The Standing Strong for Our Precious Water art exhibit is expected to be one of the largest events to date.

“We will be honoring the current events at Standing Rock and raising money for the camp” says Wendy Savage, a Fond du Lac enrollee and curator of the exhibit. “I am honored to see the willingness of the artists to join this exhibition creating beautiful works of art.  It is humanity coming together for our most precious resource -- water!”

“I know that artists of every medium have been inspired by everything that’s going on, especially in the indigenous community,” says Villiard. “We’re really excited to be providing a space for all of the visions to be seen and voices to be heard.”

The American Indian Community Housing Organization is one of 27 nationwide facilities that focus on a specific ethnic group. They provide housing services for people suffering from long-term homelessness, transitional housing for survivors of domestic abuse, and they run a 10-bed domestic violence shelter - the only Native American shelter that provides services to battered women and their children in the seven county area surrounding Duluth, Minnesota. Honoring the resiliency of Native American people, AICHO’s vision is to strengthen our community by centering indigenous values in all aspects of their work.  AICHO’s operating philosophy is that every American Indian woman and child deserves to live in a safe, non-threatening environment and should be treated with dignity and respect.

“In Ojibway culture, women are the keepers of the water. All women are rising and making the world aware that we must stop polluting our life-giving water.  This exhibition will reflect the importance of all people coming together for water,” said Savage.