How to Scrap the Electoral College 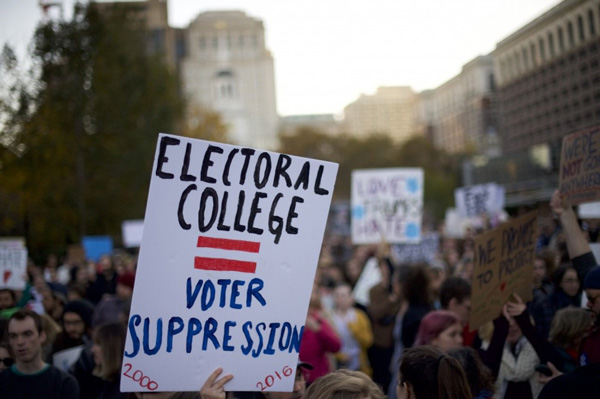 Sixteen years ago, as the 2000 presidential election recount in Florida transfixed the nation, the newly elected Senator Hillary Rodham Clinton spoke directly to the likelihood that Al Gore would win the popular vote and still lose the election:
“I believe strongly that in a democracy, we should respect the will of the people,” Mrs. Clinton said, “and to me that means it’s time to do away with the Electoral College and move to the popular election of our president,” the New York Times reported.
If Mrs. Clinton had worked as hard over the last 16 years to abolish the EC as she worked to win the Democratic nomination, she would be moving back into the White House in January. Five times in US history and twice this century the popular vote winner has “lost” the presidential election because of the slavery-tainted Electoral College. (Counting enslaved people as almost-persons increased the official populations of slavery states -- and in-turn boosted their Electoral College clout.)
Sec. Clinton, by winning more votes than Donald “the pig” Trump -- between 1 and 1.5 million more, Politifact says 800,000 more -- would in any other country in the world be the President-elect. But because of the Electoral College’s absurd winner-take-all rules, the pig snaps up every electoral vote in Pennsylvania, Michigan, and Wisconsin (giving him his EC margin of victory), even though he won by a mere 1 percentage point in all three states.
Ralph Nader called again Nov. 10 for elimination of the Electoral College. “Hillary Clinton won the election,” Nader said. “We’ve gotta get rid of the electoral college,” he said, because it “makes the US a mockery of the world” -- the same way America’s handgun violence, climate change denial, death penalty, and astronomical healthcare costs do. “Nowhere else on Earth can someone can win the popular vote and lose the election,” he said.
“The two major parties don’t own all the votes” Nader said, referring to the fact that “electors” in the “college” are nothing but officials from the two major parties, elected office holders, or funders with vested interests who always vote blindly for their party’s nominee based only on their single state’s final tally -- regardless of the will of the nationwide majority.

The National Popular Vote bill
One answer to this anti-democratic election rigging is the National Popular Vote bill. The law would guarantee the presidency to the candidate who receives the most popular votes nationwide. The bill has already been passed into law in 11 states; states that control a total of 165 electoral votes. The law will take effect nationally when it is enacted by states with a total of 105 more electoral votes. Most recently, the bill was passed 40-to-16 in the Republican-controlled Arizona House; 28-to-18 in the Republican-controlled Oklahoma Senate; 57-to-4 in the Republican-controlled   New York Senate; and 37-to-21 in the Democratic-controlled Oregon House.
The Electoral College is based on state law, so when enough additional states pass the National Popular Vote bill -- enough to add up to the 270 electoral votes needed to win the White House -- then the “electors” would be legally bound to vote for the popular vote winner and never again steal an election from the top vote getter.
Even the pig himself has criticized the Electoral College. Just before the 2012 election, in a Twitter post that looks astonishingly factual today, he called the EC “a disaster for a democracy.” For months the pig railed against the “rigged election.” But like all Democrats and all Republicans before him, rigged elections are only a problem when they lose.
For more details about how to abolish the Electoral College, check out <nationalpopularvote.com>