Bozo the Clown is my president 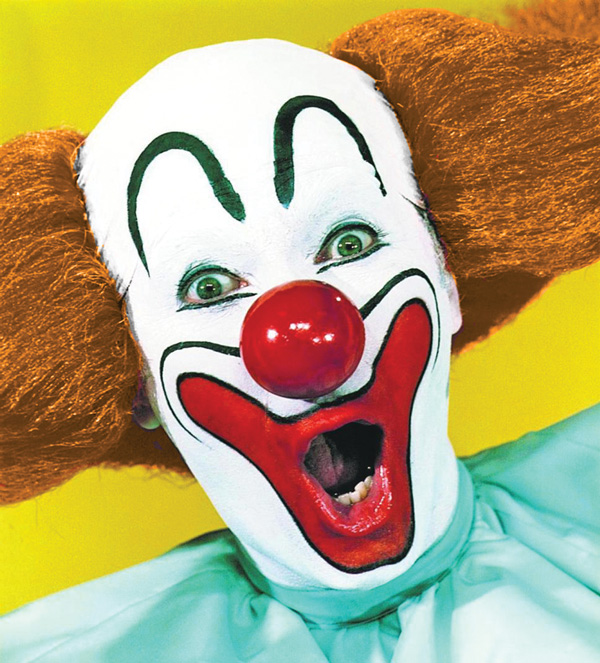 Well, the electorate has spoken.
And while the Electoral College shows that Bozo the Clown garnered enough votes across a swath of middle and southern America to win the presidency, Hillary Clinton will end up “losing” the race by winning the popular vote by possibly a million votes. At last count Clinton was leading by at least 750,000 votes without all of California, Oregon and Washington being fully tallied.
Geez, Bozo didn’t even win his home state. Matter of fact, he lost by a large margin. I’m assuming the reason is because New Yorkers have lived with Bozo a lot longer than the rest of us have.
Whew.
It all goes to prove that it’s where the votes count not how many there are.
That wide swath of country, excuse me, the white swath of the country where Bozo earned the victory has proven a last stand for white America. An America where the clown who loses the popular vote has supporters who can suspend reality and ignore the fear and loathing of the message and still come out to say that America will find unity and be great again.
Whew.
I’ve had a number of concussions in my life. Real thump on the head, knocked out kinds of things. Foggy thoughts that persist for up to several months. Then one day I wake up and understand that the concussion is over. That malaise is gone. Cleared out. Over.
I’m feeling better now but I believe this concussion will last four years or until someone gets under Bozo’s skin and gets him to do or say something stupid again. It’s already happened when he criticized the protests against him going on in locations across the country, tweeting that they were the makings of “professional” protesters at the urging of “the media.”
Oh, he responded the next morning that citizens were exercising the rights, or some such thing, and that the country would be unified.
I don’t believe he is the man who will be humbled by the office. I don’t believe he will change.
I had a look back and noticed a Life magazine, year-in-review issue for 2009. Certain rabid white folks of the Tea Party persuasion were mad at a black president in his first year in office. In the photos they were looking angry and holding signs that showed the president’s face with Hitler mustaches. Hitler mustaches. There were signs that said he was a tyrant.
Whew.
Obama didn’t tweet. Obama held his cool.
I will write letters to Bozo, respectfully calling him President Trump. I will mention the fact that he has no mandate to deny climate change, to throw the health care system back to the insurance companies and back to the place that led to efforts at reform in the first place. I will write him that efforts to unify the country as long as white supremacists support him just won’t work.
I will write a lot of things over the next four years or until that time when he embarrasses our country by indictments or perhaps revealing that he hasn’t paid taxes at all for most of his adult life and the middle class whites that drank the Kool-aid finally understand that he’s a crass man who has no scruples and really can’t be trusted to oversee the common good.
I can’t say much more about the rest of the Party of No, the New Conservative Neanderthal Party (NCNP). You know, the Mitch McConnells saying that the first job of the NCNP in 2009 was to make sure Obama was a one-term president. Or the Paul Ryans who are now gushing over the NCNP majority and the chance to really ram a platform of negativity down the nation’s throat. Go read the NCNP platform. There aren’t a lot of positives.
So Bozo is my Clown and I’ll do what I can to make sure the party that didn’t win the popular vote doesn’t stick it to the majority of the nation.
There is no mandate, Bozo.