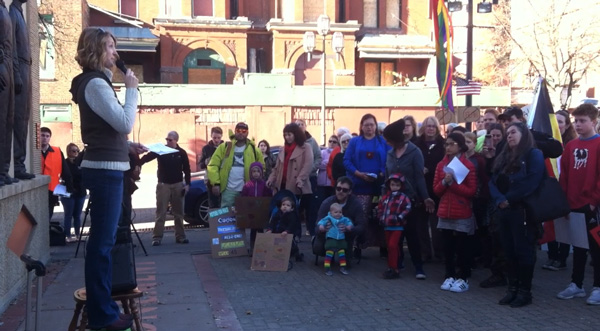 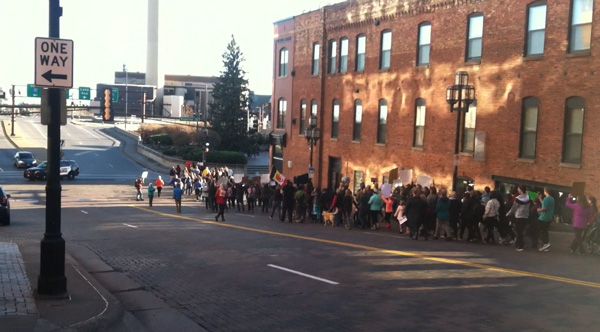 On Sunday, November 13th, 2016, our local community responded to our country’s recent Election results. Although they may not speak for everyone in the Twin Ports, there was still a significant turn out of citizens at the Clayton Jackson McGhie Memorial, located on First street, in downtown Duluth that day. On Sunday a group of peaceful protesters got the chance to have their voices heard. The gathering included a rally / protest against racism, xenophobia, bigotry, and hate. Followed by an impressive march involving dozens from the Memorial, down to the MN Power Plaza on Lake Avenue and Superior Street. Everyone remained peaceful and respectful through all of the speakers at the initial rally, through the march, and for the final address at the Plaza.

Protesters included people of all ages, and from all walks of life, everyone from small children to elderly. Many respected community members and elected officials were in attendance as well, some with insightful words of hope for the crowd. A diverse number of issues were discussed that day in front of a crowd which, though they may have felt defeated, still respectfully stood up for their right to peacefully demonstrate against that which they cannot accept.

Cities all over the country have risen to action in a series of protests in the last week, mostly peaceful, with the exception of things reportedly taking a violent turn for the worse in Portland, Seattle, and Oakland. Thousands of people all over the country have chosen to speak out about our new President-elect, chanting things like “not my president” and “love trumps hate.” Some of the earliest cities to erupt in protest were New York, Los Angeles, and Chicago. Quickly setting off a reaction of similar protests all over the country, many remain in urban areas, but even more rural typically red states have seen outbursts of protests this week. Though I hear many other cities experienced the sudden transition from protest to riot, I must say, Duluth knows how to keep it peaceful. Not one moment of violence or hate was seen from our community’s demonstration on Sunday, and that’s reason enough to be proud of our city.