Yes, I did put my TRUMP sign upside-down for a reason 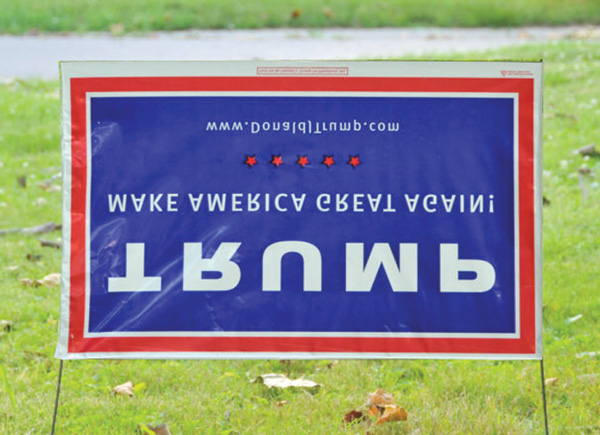 The democratic ritual has been performed once again. Writing on Tuesday I certainly hope we don’t have the DTs (the Donald Trumps-an affliction very similar to delirium tremors). Even if we don’t have the DTs it appears there will be plenty of other angry white folks who do have the DTs and we’ll have to deal with those in the coming days, months and years.
As much as I want to say that you’ll never get to solving a problem without talking about it, I worry that we won’t be able to analyze the causes of this particular malady that’s hiding in plain sight in millions of people who are angry for all the wrong reasons. They just won’t talk about it. They drank the pseudo-billionaire’s kool-aid of anger and will deflect the blame toward Obama and Clinton and Muslims and Mexicans and any other number of convenient but false targets.
The upside-down Trump lawn sign in my yard did come in handy. The dearie told me to color in the T and be the first one on the road to have a RUMP sign because that’s what he is in the most polite terms but upside-down seemed to do the job.
As I said before, I asked many a Trump supporter what they were angry about. And like the minions of the Tea Party in prior years they just couldn’t articulate an issue if it bit them in the RUMP. Angry white people have a hard time with that because it’s been a while since they were slaves or immigrants or kicked off their ancestral lands by an invading and westward ho nation. So they trusted a pseudo-billionaire to be their populist champion. When was the last time middle class Americans made a pseudo-billionaire their populist champion? A loud-mouthed, misogynistic, bigoted, pseudo-billionaire, whose narcissism allowed him to leap head first into the right wing bigoted blather to fuel a campaign of ignorance?
I’ve asked the question many times before. How do you cure ignorance? How do you cure the disease of accepting falsehoods as truth? How do you get someone to see that the campaign of deception is a step-by-step plan of talking points created by right-wing moneyed groups that persuade real people to feel like they have created grassroots movements of their own. Now we have whole false news organizations out there on the web whose sole job is to create disorder and disinformation so it can be picked up and passed around social media by gullible voters.
I spent 25 years as a news editor and columnist and I’m having a hard time watching a noble profession be tainted by the talking heads and bloggers who don’t seem to possess a soul and have no problem distorting reality and writing about it. As an editor in a community paper I simply couldn’t write things that weren’t accurate. Credibility is the basis of news. The media clowns don’t care about credibility. It’s all about deception.
Still, the National Union of Friendly Americans (NUFA) has an obligation to expose groups like The Angry Billionaires of America for what they are. All these false populists are shaking their fists and ranting about the liberal elites all the while spewing direct quotes created by the billionaires and corporations and their oddball front groups that spend all their time denying climate change and promoting economic policies that favor the top one-tenth of one percent.
In the coming weeks NUFA will look to expose many of the front groups of the moneyed elites who have so successfully gotten angry middle class whites to shout their goofy messages.

In the meantime, if angry whites show up at your door because you had an upside-down TRUMP sign in your yard just be patient. They can’t stay angry forever.