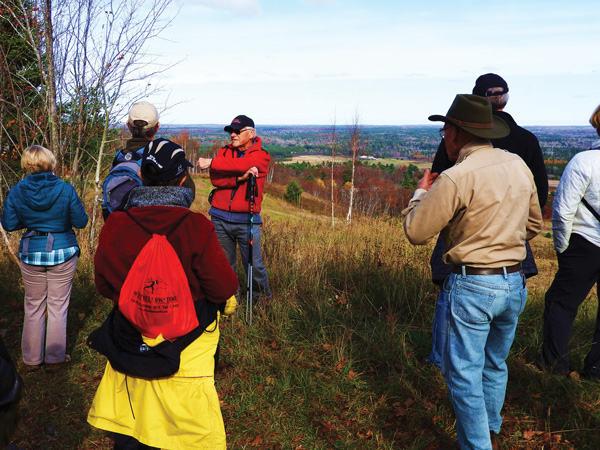 The view from the top of Mount Telemark can extend all the way to Lake Superior on a good day. Photo by Emily Stone. 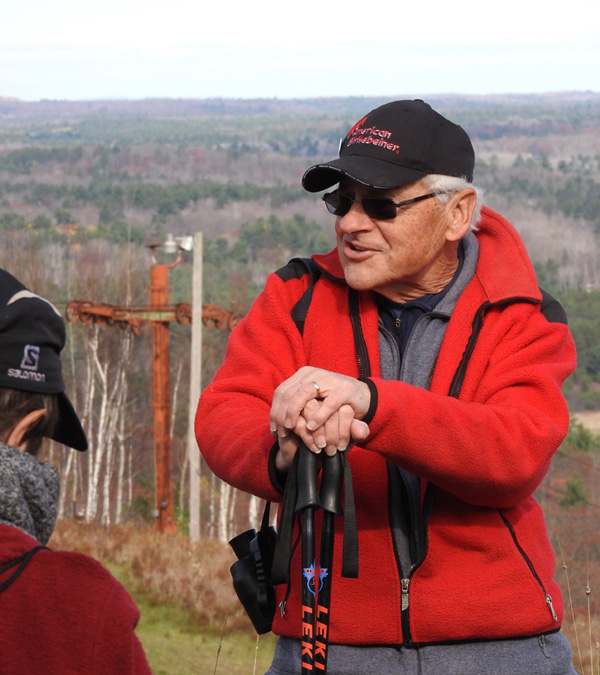 John Kotar talks about the geologic history of Mount Telemark while the rusty tower from a chair lift conveys speaks to events in the hill’s more recent past. Photo by Emily Stone.

Piling out of our cars onto the cracked concrete parking area, we all commented on the perfect weather for our hike. Sunshine, a light breeze, and 45 degrees is about as good as it gets in late October up here. This group of curious adults was gathering for a walk titled “Why Wisconsin Forests Look the Way they Do #5,” led by John Kotar, emeritus professor of forest ecology from University of Wisconsin-Madison, who literally wrote the book on natural communities in the Great Lakes region.

Our destination was Mount Telemark—a place with a lot of history. As we hiked up the gravel access road, weathered sheds huddled in the bushes and rusty ski lifts peeked through the trees and overgrown fields. Telemark Lodge was an alpine ski area founded by Tony Wise in 1947, one of the first in the United States. Tony had discovered alpine skiing while stationed in the Bavarian Alps during World War II, and then used a GI Loan to purchase this hill. The resort eventually became a hub of cross-country skiing, and the birthplace of the world-renowned American Birkebeiner ski race. The impressive lodge with its giant fireplace was built in 1972; a Colosseum with four tennis courts added in 1980; and in 1984 it went through the first bankruptcy (of four).

I personally have relatively few memories of Telemark Lodge when it was open, but in the collective memory of our community, our region, and skiers across the country, this place looms large.
At the center of it all is Mount Telemark, a 300-foot-tall “mountain.” Topo maps show a wide, irregular hill; elongated NW to SE and rising above a sea of lumpy terrain. Legend says that the Ojibwe named it Kawabming, meaning “place to look out from.” The view is quite nice. It attracted skiers here in the 1980’s, and it drew us here today. John Kotar himself has a long history of Birkie skiing and Telemark memories. But its history began long before the Ojibwe, Tony Wise, or John Kotar arrived.

Around 10,000 to 14,000 years ago, near the end of the last ice age, this area was buried under a mile or more of glacial ice, and the ice was melting. The retreat of the glacier was a messy affair. Glaciers don’t glide backward, they disintegrate. Chunks of dirty ice broke off and got buried or surrounded by heaps of debris. Sand and gravel filled in every possible hole, crack, and gap in the remaining ice.

Sediment-choked rivers of meltwater coursed along the glacier’s surface and plunged downward through crevasses, or vertical shafts called moulins. By one account, Mount Telemark was created in one of these moulins. First, sediment would have piled up in the hole, and then become a hill when the ice melted away. By Kotar’s account, the sediment may not have filled in such an orderly space, but simply a gap in the ice that was created as the glacier parted around a bedrock lump. In either case, we ended up with a giant hill of glacial remains. In fact, this is the tallest pile of glacial sediment (technically known as a kame) in all of Minnesota and Wisconsin.

The steep-sided landform provided slopes for 10 different ski runs in its heyday—served by six ropes, 3 T-bars, and 3 double chair lifts. In a little twist of irony—on top of a hill once buried by a mile of ice—Tony Wise devised some of the original snowmaking equipment in the Midwest. The first iteration involved using logging sleds to haul snow up from the airport runways and blowing it out over the slopes with a silo loader. The very next year they installed a commercial system that used Larchmont Snow Guns and pipes—still visible along the forest edges—to carry water uphill.

This landform, made of gravel and cobbles, also provides dry, nutrient-poor soil that favors trees like oaks, pines, and birches. The human disturbance of cleared, then abandoned, ski runs also has impacted what grows here. The gently sloping clearing that we hiked up, for instance, sported a thicket of slender birch trees next to the rusted cables of a ski lift. Birches have very low shade tolerance, and took advantage of the sunny, open space to get a head start.

The view from the top was spectacular. Two vibrant, orange maple trees stood out in the sea of evergreen, rich oak-brown, and tamarack gold. We also could see an airport, golf course, roads, distant fire tower, and more remnants of the resort buildings and ski runs. Of the five places we’ve visited with John to learn “Why Wisconsin Forests Look the Way they Do,” this one especially drives home the fact that glaciers and humans have been two of the driving forces shaping nature in the Northwoods.