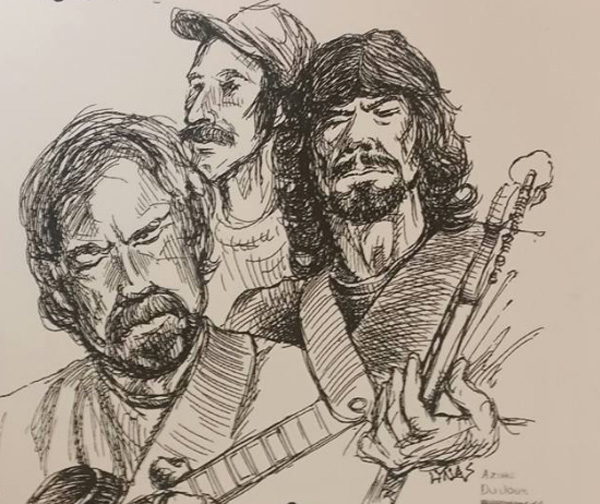 Duluth does have a certain affinity towards blues music. Next summer will be the 29th year of the Bay Front Blues Festival. While their is definitely a certain fan base for the genre, there aren’t exactly a lot of acts in the area that claim to a straight up blues band. After a six year hiatus, the blues band, Azure Du Jour, will once again take the stage in the Twin Ports at The Red Herring Lounge on November 5. Anyone that’s into blues from the area might have seen the group playing at bar venues like Bev’s Jook Joint or R.T. Quinlan’s back in the day. They have certainly taken the stage at the annual Blues Fest at Bayfront Park.

The group could be considered a super group of sorts. “Combined we have around 200 years of experience,” said Jim Hall. The band will bring back with the three original members of the group including Jim Hall and Randy Anderson on guitar. Joe Lindzius, the former drummer of Molly and the Haymakers will take on the drums once again. Lindzius plays regularly in the area at locations such as Thirsty Pagan Brewing, where he plays most Sundays. Hall also carries a residency at the Pagan with his acoustic duo The Original Sawtooth Mountain Boys on Wednesdays at the Superior brewery. After years of playing, Hall’s hands aren’t what they used to be so he is taking on the guitar and Jane Alexson will be covering on bass for this Saturday’s show. Alexson plays regularly in the area with the Jazz/R&B group, The Jane Gang.
We talked to Marvin Pomeroy, the current drummer of The Jane Gang and well known for his longtime percussion work with the Surf/Rock group, The Fractals, about Azure Du Jour, “that’s the top of the food chain, those people are the best at what they do. It will be chalk full of emotional content. They have great playing, great songs, great chemistry,” said Pomeroy.

The group began in the late 90s, Hall speculates that the group started in 1998 or 99. “We were together for about eight years,” said Hall. “But our last gig was six years ago.”  The band formed after the groups The Blue Healers and Molly and the Haymakers ended towards the late 90s. With Hall, Anderson, and Lindzius between bands, they decided to start jamming together. While the band can play for four hours and they have a set’s worth of original songs, the band doesn’t really have a need to practice. After listening to their 2004 CD titled “Shorty Sings The Blues,” it’s apparent that the band is so experienced that they just have an intrinsic groove where they flow nearly flawlessly together. “That’s one of the charms of the band. We all have big ears, we listen to each other and play off each other, every time we play things are a little bit different.” Blues is the foundation of the sound, and the basic structure isn’t very technical, but the way they jam with each other is certainly a treat to listen to. It’s professional work that can only be achieved after playing several days a week for years. When listening, there are all sorts of things that build up and let down the songs, while being fairly laid back overall. It’s more of a contemporary take compared to Americana or Delta Blues, but doesn’t go to the point where it starts to feel overly hard driving or in your face like a rock group. Refined, fun, and good songwriting with a clever assortment of covers will please most music lovers. If you like the blues, this is really going to be a rare and meaningful performance. Hall mentioned that it’s likely the group will be done indefinitely after this show. You never know, but this indeed might be the very last performance from this all-star band.

Azure Du Jour will play from 6 to 10 pm at The Red Herring on Saturday, November 5.