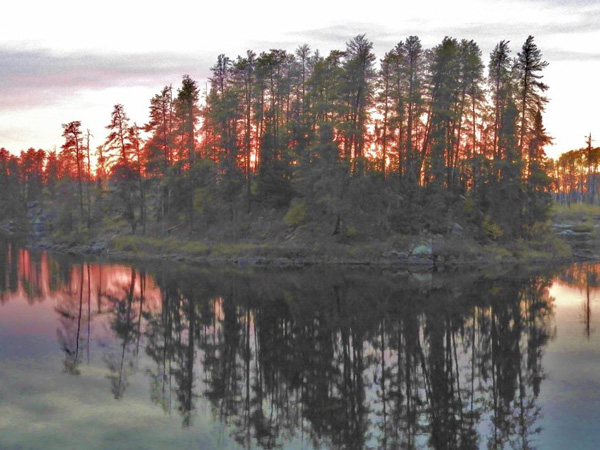 Fortunate or unfortunate? This jack pine stand escaped the Pagami Creek fire of 2011, but the trade-off is that these fire-dependent trees were “spared” from the source of their own renewal. Photo by Emily Stone.

A fleeting sunset flamed through a ragged stand of jack pines across our bay on Lake Two. Patchy clouds provided just substrate enough to catch the color, and the faint breeze barely ruffled their reflection on the lake. Here, on a classic rock knob campsite in the Boundary Waters, we perched above a scene of rugged beauty.

As it turns out, we were also perched on the border of the legendary Pagami Creek Fire. First detected on August 18, 2011, the smoldering burn stayed within a bog for days. When the relative humidity plummeted to 18% and a north wind picked up on August 26, the fire roared to life and swept through the forest’s crown. By November it had burned 93,000 acres, and sent smoke all the way to Russia. To protect the extremely popular, highly visited landscape of Lakes One and Two, the Forest Service completed a “burn out” operation between the fire and those lakes.

Looking at the maps, it’s quite likely that our view was part of the burn out, and our peninsula campsite was somewhat protected by their efforts. The point on the north side of the bay, now glowing with the sun’s last rays, was also spared. Its grove of jack pines are a respectable uniform height. While jack pines always look a little disheveled (like “something the cat dragged in,” joked my friend when helping us learn pine identification), at least these still had needles.

To the south, the skeletons of burned jack pines shimmered on the glassy lake, and the remains of their scraggly crowns scratched the sunset clouds at the same height as their more fortunate neighbors. Both stands probably started their lives after a past crown fire burned through an even older jack pine forest—although, with jack pines, it might be a little harder to tell if the burned or unburned half of the forest is more fortunate.

The unburned forest is getting up there in years, and has attained the average maximum height for jack pines of about 60 feet. Jack pines mature quickly, and maximum cone production begins at about age 20. The canopy shows signs of decay at only 75 years old. And while individual trees will survive up to 200 years (the oldest known jack pine was 243 years old, found in the Boundary Waters!), there isn’t much hope for a second generation of sun-loving jack pine seedlings under the stifling shade of the adults.

The charred skeleton of the forest is actually brimming with life. A thick carpet of 5-year-old jack pine seedlings, with a few aspen and birch mixed in, promises a bright future.

Jack pine is uniquely attuned to fire. Almost every burn that enters a jack pine stand will climb up the dry ladder of dead lower branches and become a stand-killing crown fire that provides seeds with full sunlight and a dose of fertilizing ash for expeditious growth. Flaky bark and resinous needles urge the fire on. In contrast, red and white pines self-prune their lower branches and grow thick, corky bark to prevent fires from crowning. They’re adapted to ground fires, which clear out competition, but allow old trees to thrive.

The key to jack pine’s dependence on fire, though, is its serotinous cones. Rather than referring to the sticky resin that glues the cones shut, serotiny simply means the trait of delayed seed release. Jack pine achieves this with a satisfying series of tricks.

First, the cones are glued tightly shut with resin, and may remain “in storage” on the tree for several decades. During their extended residence, the resin protects against seed predators like crossbills and squirrels, who make short work of the nutritious seeds in the cones of other species. When a fire finally rips through the forest, the resin ignites at a low temperature, and this relatively cool flame (only 112 degrees Fahrenheit!) helps prevent serious damage. The resin is stored in reservoirs within the cone, but only burns after it has traveled down a duct to the tip of the scale and encounters oxygen there, outside the cone.

Inside, corky material on the cone scales provides insulation for the seeds. The temperature gradient created from the outside-in causes the scales to curl back and open the cone like a flower. In fact, as our small campfire—composed mostly of jack pine twigs laden with tightly closed cones—crackled softly against the descending dusk, we watched in delight as the cones slowly “bloomed.”

Just that series of events is amazing enough, but jack pine’s cones go even further in their Rube Goldberg machine of adaptations. Although the cones open while the fire is still hot, the seeds stay safely stuck in the warm, gooey resin instead of dropping into an inferno. Only once the resin cools, shrinks, and cracks, do the seeds drop out—onto fresh, habitable soil.

What’s more, jack pines in fire-dominated areas produce almost entirely cones that open only with fire, while jack pines in the southern part of their range or on islands where fire is less prevalent, are adapted to opening just from the heat of the sun (a good thing, or else they might never open).

Sure, there is beauty in a colorful sunset “flaming” through the forest, but there is also beauty in the dance of fire, seeds, death, and rebirth when those flames are real.
Special Note: Emily’s book, Natural Connections: Exploring Northwoods Nature through Science and Your Senses is here! Order your copy at http://cablemuseum.org/natural-connections-book/.
For over 45 years, the Cable Natural History Museum has served to connect you to the Northwoods. Come visit us in Cable, WI! Our new phenology exhibit: “Nature’s Calendar: Signs of the Seasons” is now open.